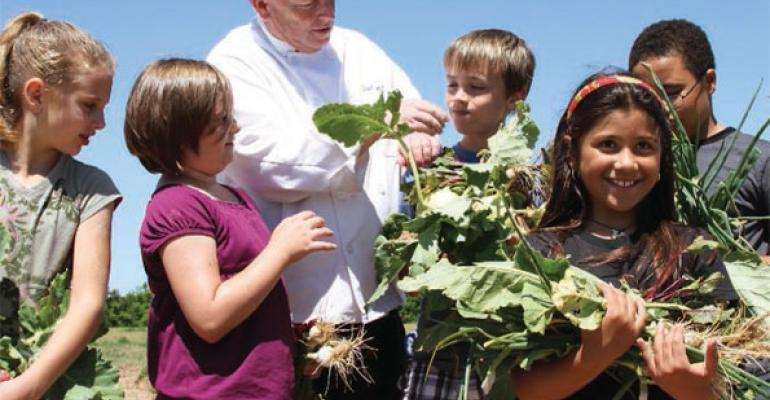 At Ponca City (OK) Public Schools, Jeff Denton is a celebrity. Director of operations for the District’s Campus Mart school dining program, Denton is also a veteran performer in front of the camera with a TV resume that goes back almost a decade.

His most recent foray into the electronic medium is Kidchen Expedition, which takes him and four child actors on trips to area farms and orchards, where they learn how different crops grow. Then, they bring crops back to the studio, where they are cooked.

It’s all very fast paced for a good reason: “Since this is designed for first through fourth graders, you have to keep them moving,” Denton says.

A street interview segment has kid reporters asking peers about terms relevant to the particular show such as “beta-carotine” and “perennial.” They are then explained by an animated chef cow character.

A music segment features tunes written by the multi-talented Denton (a published author of four books), who also developed the animated characters like the chef cow and a fumbling professor who experiments with food. Each show wraps up with Denton giving a quick cooking demo on how to make a particular healthy snack.

Funded by grants from Farm-to-School, the Centers for Disease Control and private industry, the 22-minute Kidchen Expedition episodes are available to all school districts in Oklahoma and are also being sent to PBS stations nationwide. It is also on the web (to access, go to www.kidchenexpedition.com).

Denton is listed as creative consultant on Kidchen Expedition, a reduced behind-the-scenes role from his earlier shows, where he seemed to do just about everything. They included Okie Chef, a program geared more to adults that focused on promoting family dinners, and Kidchen Cooking, an earlier kids cooking foray featuring Denton preparing kid-friendly recipes in front of a live audience of children.

In his “day job,” Denton oversees school dining for Ponca City’s 5,500 students, a role the former commercial chef and entrepreneur has held for more than 20 years.

“I am seen as the most identifiable person in Ponca City with the kids,” he laughs.