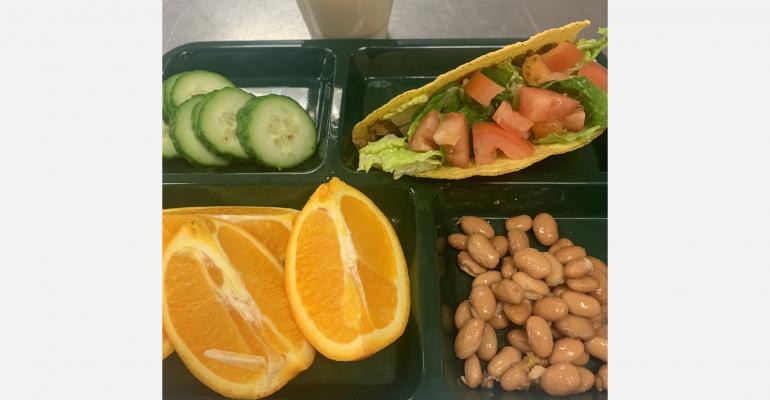 Plant-based choices check a number of boxes in this diverse Maine community.

While many high school cafeterias provide options for vegan students, the pickings can be slim for their elementary school counterparts: peanut butter and jelly, veggie wraps and salads are common offerings. But in Portland Public Schools in Maine, younger students can opt for a hot vegan lunch every day.

It’s not totally new—the hot lunch choice first launched in the 2019-2020 school year, was put on hold for a year because of remote schooling, then resumed last September. “The program always had a vegetarian option, and we were looking to update that,” says Jane McLucas, food service director for the schools.

The vegan offering grew out of a recognition that the district’s increasingly diverse student body and their diverse dietary needs. A group of parents was also pressing for more vegan options. So McLucas and her team consulted with the parents to develop a vegan menu that could check the boxes for a variety of dietary requirements, from vegetarians to kids who for cultural or religious reasons avoid animal products. 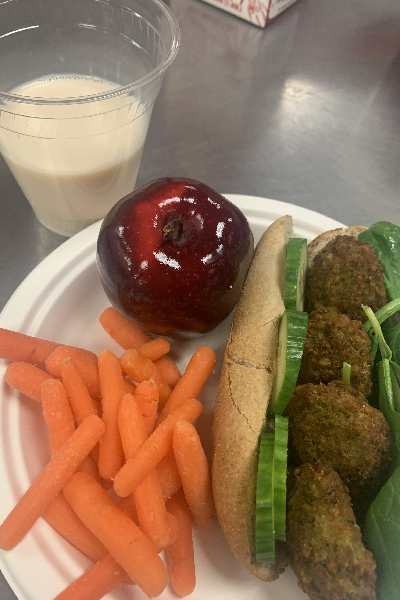 Photo: A falafel sub is among vegan choices served at Portland elementary schools.

To a large extent, the vegan choices mimic what’s on the conventional menu. Traditional choices include a seasoned chicken over rice; the vegan offering swaps in seasoned tofu. A vegan chili mac, vegan burgers, barbecue tofu sandwiches, build-your-own hummus pizza and falafel are on the regular menu. A tofu taco and sloppy joe with lentils were added recently. Students may also opt for a vegan sunflower seed butter and jelly sandwich instead.

One day a month, the only hot lunch option for all students is vegan: vegetarian chili served with baked Maine potatoes and tortilla chips.

One thing McLucas has worked to avoid is menuing faux meats that look like the real thing. For one thing, these are often highly processed. “I keep getting people who want me to buy vegan chicken nuggets,” she says. 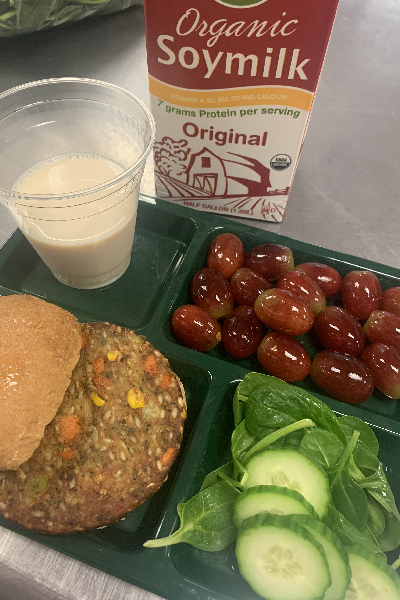 Processed items tend to be pricier than scratch-made foods as well. Portland schools buy local product when possible, including produce and locally produced tofu, to support area farms and firms and contain costs. The foodservice staff also has been experimenting with various ingredients to create vegan versions of popular choices, such as tacos. For the time being, though, “we’re just trying to get by,” McLucas says. “Like everyone else, we have had supply chain and staffing issues, so we have not been looking into other items,” she adds.

The other problem: plant-based meats can confuse the kitchen staff and raise the potential for cross contamination, especially since some of the menus deliberately mimic familiar standard dishes. “Because our schools have heating kitchens, they end up with two things that look very similar, and then what do you do? I’m trying not to put my staff in that situation and also make it different enough that it’s physically different for the students,” McLucas says.

McLucas said the original plan called for expanding hot vegan lunches to the middle schools, but between pandemic-related disruptions and staffing shortages, scaling up production hasn’t yet been possible. Today, a central kitchen prepares the meals and supplies them to elementary schools, where they are reheated for service, while the middle and high schools operate their own kitchens. In addition, students at the high school level already have more potential hot vegan choices.

The program was promoted the first year it was rolled out: students were offered samples and “try before you buy” tastes, and the local media publicized the menu additions.

Despite those efforts, and parents’ push for vegan lunches, the vegan meals have not attracted a strong following. Only about two to five percent of students choose them, depending on the elementary school. “I wish the offering was more popular,” McLucas says.

At some of the schools, the staff automatically serves every student the day’s conventional meal, and anyone who prefers the vegan lunch must request it. Some observers think students are either reluctant to voice their wishes or face language or mask barriers to communicating them clearly.