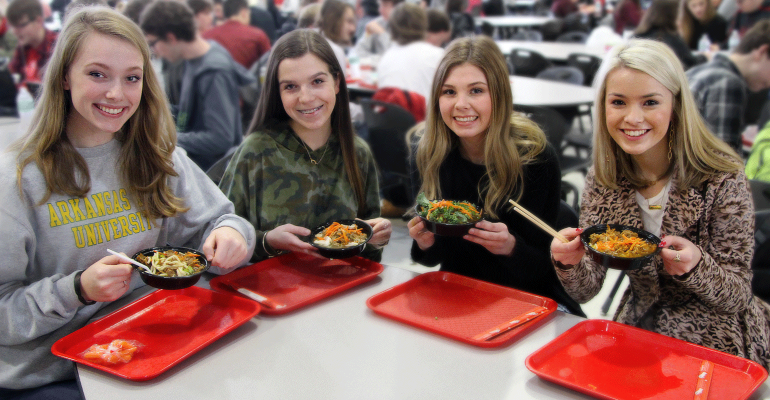 When an assistant principal from Cabot High School visited the locally famous ramen bar at a Little Rock hospital, he got an idea.

“I think the kids would love it,” he told Erin Wilkes, director of foodservices for Cabot Public Schools in Arkansas.

The Cabot High cafeteria serves a wide variety of options to its 2,000 students. A ramen bar, he thought, would fit right in.

Wilkes had started researching the idea when a broker for Tyson Foodservice—one of the food manufacturers the district works with through Sysco—asked Wilkes if she had any new ideas. She mentioned that she thought some of the company’s products could work for a ramen bar.

She was surprised—and pleased—when the company jumped in to help the district customize the entire concept.

Gary Corbin, a chef with Tyson who serves on the culinary marketing team for its K-12 channel, was enthusiastic about putting together the new concept for Cabot and two other schools in the area.

“At that point, I had never heard of any type of K-12 having a ramen,” Corbin says. “It’s something new, something refreshing, something healthy, something trendy.”

Corbin visited the schools, assessing their kitchens, and taking note of their existing equipment, staffing and the length of their lunch periods. He and the team at Tyson then recreated each scenario in their own kitchen and practiced making the ramen bowls so they could identify potential roadblocks. 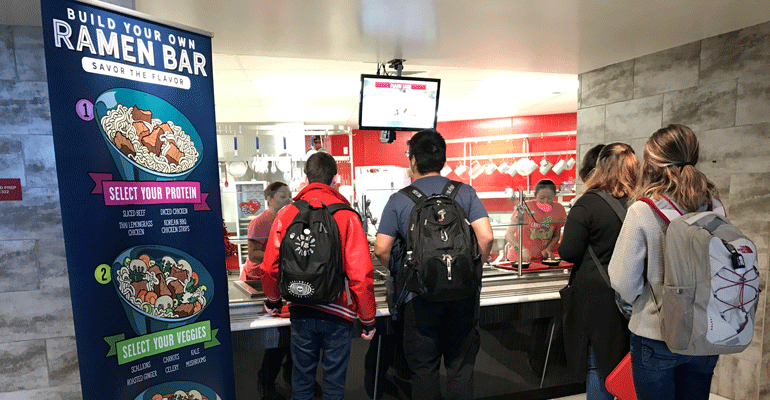 They instructed a school without an acceptable heat well, for instance, to use a coffee urn for the broth. They also experimented to find the best preparation methods so ingredients would be ready to eat by the time each student sat down: When the hot broth hits julienned vegetables and partially cooked mushrooms, they become just the right texture.

Wilkes appreciated the attention to detail. When she visited the Tyson kitchen, she received training about everything from boiling and portioning the noodles to heating the broth to vegetable prep.

The company also made sure that the concept would be in compliance with school nutrition standards. Corbin and his team assembled the elements of the ramen bowls from existing products they sell, settling on pulled chicken, sliced beef, meatballs, lemon grass chicken and spicy Korean barbecue chicken. (Cabot High School offers two meat options at a time.) These products already fall within school nutrition guidelines individually, so Corbin focused on making sure that the overall sodium level would be in compliance.

To do this, he used prepared low- or no-sodium broths. Once the hot broth hit the bowl, the meats immediately infused the broth with flavor.

Both Corbin and Wilkes like the concept for its flexibility. “You can use whatever produce that you have,” Corbin notes.

Though the Cabot ramen line includes multiple fresh vegetables options—carrots, mushrooms, scallions, kale, celery and ginger—it’s difficult to control the portions since each student indicates how much (or how little) they would like. So students are still required to take a serving of fruits or vegetables in addition to the ramen. Most, Wilkes says, grab a piece of fresh fruit. 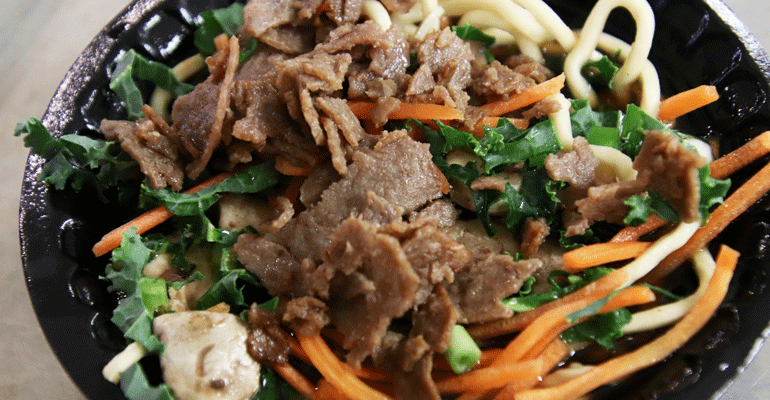 In addition to meats and meat-based broths, they will add tofu and a vegetable broth in April.

Every other Tuesday is ramen day. If the option continues to be popular, they may serve it once a week.

The cafeteria has nine lines for students to choose from. On ramen days, they use their main entrée line, staffed by four employees, and smaller line, staffed by two. To meet demand, they shifted staff to different stations but did not bring in extra employees.

Currently, they serve ramen in black disposable bowls they already had on hand. Assuming the concept continues into the next school year, they plan to order larger bowls to cut down on the possibility of spills.

Wilkes said the week they debuted the concept, students waited between four and five minutes in line. Though Cabot High has a comparatively long 40-minute lunch period, the staff still wanted to speed it up.

They reconfigured the flow, creating four points of entry along the two lines. The next time, it cut the wait to two minutes or less per person.

But even on day one, no one seemed to mind a few extra minutes.

“The most exciting thing about it was the reaction of the students. They were pretty jazzed about it,” says Corbin, who was on site for the launch. “It was fresh and colorful. It was fast and easy. And the staff just nailed it.”