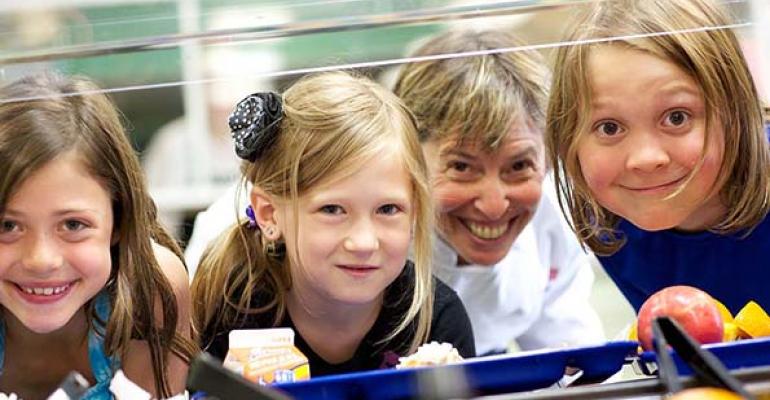 Ann Cooper hasn&rsquo;t been fazed by the new regulations and she&rsquo;s not afraid to tell you why. Scratch cooking, educating students and if anything, more support from the USDA, are what it&rsquo;s going to take to meet them.

After recently writing about the complexity of the debate over school nutrition and the Healthy, Hunger-Free Kids Act, I received a lot of feedback from school foodservice directors struggling with the new regulations. “Too much, too fast,” I heard, along with various stories of declining participation and increasing food waste. I wanted to hear the other side, from someone embracing the changes and someone not afraid to speak her mind.

I needed a renegade. Ann Cooper—the director of foodservice for Boulder Valley School District in Colorado, co-founder of TheLunchBox.org, author of Lunch Lessons: Changing the Way We Feed Our Children and the Culinary Institute of America grad better known as the Renegade Lunch Lady—has long made it her mission to transform school lunches into wholesome, nutritious and delicious meals.

She recently talked about the new regulations and why she thinks the School Nutrition Association is fighting a losing battle.

Tell me about your district and how it’s doing?
Cooper: We have 30,000 kids and 52 schools with about 20% free and reduced. Participation is about 45% in elementary school, 35% in middle and about 15% in high school. But overall it was up 7% last year and it was up 4% the year before.

Any new initiatives or plans for this school year?
Cooper: The big thing is our food truck. We did some testing with it last year and this year it will be at a different high school every day. The meals will be adaptations of what we’re serving inside the schools and everything served will qualify for a reimbursable meal.

What are your thoughts on the ongoing debate over the new standards required by the Healthy, Hunger-Free Kids Act?
Cooper: My issue is with the SNA saying things like, ‘We need to roll back the guidelines.’ There’s no reason everyone can’t comply. If we actually cook, it’s not hard to meet the guidelines. Here’s the thing: It’s probably harder to teach kids Shakespeare than cartoons, but we do that. The argument saying kids won’t eat this so we shouldn’t serve it is the most ridiculous argument in the world. Our participation was up 7% last year over the year before because we’ve been doing education in the schools. We don’t let students decide to learn math, science or English, so why do we let them decide this? Schools are drug and alcohol-free zones, so why not junk-free too?

But is cooking from scratch critical to do this and is that possible in every district?
Cooper: I think you can do it without cooking from scratch and what we should be advocating for is education. If we advocated for education and support for directors rather than rolling back guidelines, it would make more sense. If people need support, let’s get it to them.

I’ve heard from many directors that it’s hard to find whole-grain tortillas, biscuits, grits and other regional staples that kids will eat. Have you had problems finding acceptable whole grain products?
Cooper: We haven’t had any problem getting them and we’re in the middle of the country.

I recently spoke with someone who said you can serve diet soda, but not hard-boiled eggs as part of the Smart Snack rule…
Cooper: There could be glitches in the system. The intent is to get junk foods out of school. Let’s go with the intent, which is not to serve French fries and pizza. We don’t do any a la carte entrée food and we haven’t had a problem. I think if people want to follow the guidelines, they can. There may be an educational component missing, and if that’s the case, we need to work on fixing that.

I’m not saying everyone else is an idiot. I don’t feel that way at all. We need to support directors so they can meet the guidelines and not push to roll them back. Anyone can do this if they have support. If we want to change what kids eat, we need to educate them. Food needs to be seen as a core value like math or English.

Could a different approach have worked better for SNA?
Cooper: They didn’t need to go this route. This is the nuclear option. Every school district needs to get recertified every three years, so there’s a small percentage that are going to get their CRE (Coordinated Review Effort from the USDA) this year. They could have said, ‘We need to keep the guidelines in place, and on a school by school basis, if we need support, how do we get it for them?’

Some districts have pulled some of their schools with a low free-and-reduced population from the program. Do you think that will become more commonplace?
Cooper: It’s interesting to see where this goes. The USDA recently put out a document saying districts that pull a school out have to prove none of the commodity foods are going into that school. And there are bigger ramifications to this with Title I (federal funding for local educational agencies to help with academic standards based on low-income population).

What kind of education are you doing?
Cooper: We do tastings, have rainbow days (special events encouraging colorful fruits and vegetables), posters, Iron Chef competitions and we do cooking demos.

How about the sodium levels this year and coming up?
Cooper: The amount of sodium we’re allowed is doable if you don’t use processed food. You have to be careful with breads and cheeses, but otherwise it’s not a problem.

But not every school is cooking from scratch and able to avoid processed foods…
Cooper: We don’t cook from scratch in every school. We have three regional kitchens and a central production kitchen. The USDA did put up $25 million in grants (for kitchen equipment), but what we really need is 100 times that. We need to replace kitchens. Schools used to have them and all used to cook from scratch. All this processed food is fairly new. We need to reinvest in the infrastructure.

But where does that money come from?
Cooper: The USDA.
And should schools get more money for reimbursable meals?
Cooper: I believe we should have more money—between 25 and 50 cents more. The reimbursable rate is $3.04 and most schools are spending between $1 and $1.25 for food and that’s not enough. We really need more allocated specifically for food costs, but we also need money for training staff and for kitchens. The entire NSLP costs about $11.5 billion a year and I think we need to raise that 25 to 50%. Everyone says, ‘Oh my god, where does that money come from.’ We spend $260 billion a year on just two diseases: diabetes and obesity (directly and indirectly, according to several reports), and we spent $800 billion on the Iraq War. Think about what we spend money on and what we could spend money on. If we could see healthy food, food education and food literacy as part of preventative medicine, things would be a lot different.

How do you respond to directors who seem to be doing their best, but are still struggling with participation and those asking for the USDA to slow down on some of the regulations?
Cooper: All of that is valid, except we’ve known this was coming for a half decade. If we started making changes then, many wouldn’t be having these problems now. If the USDA thought this up yesterday, I could get behind those arguments, but we knew these guidelines and changes were coming in 2007 (when the Institute of Medicine issued its report to the USDA). People have amnesia to the fact that it was 2005 when Congress asked the Institute of Medicine to start this.