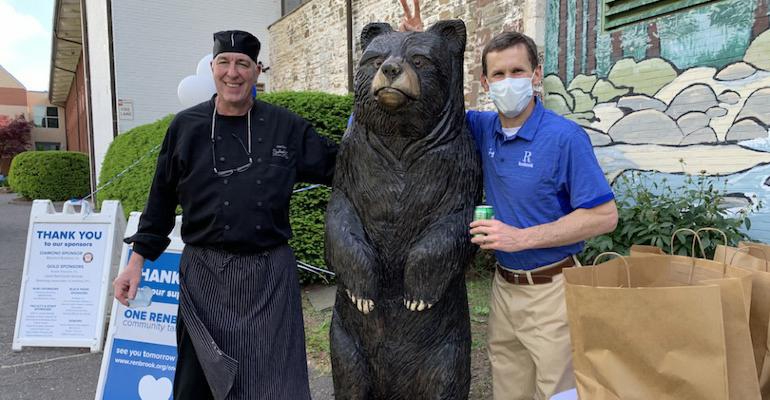 Joe Zoni, executive chef for management company SAGE Dining Services at the Renbrook School in Connecticut, not only was able to pull off a virtual fundraiser dinner for the school but also contributed a carving that fetched $3,000 at its auction and two private dinners that went for $4,000 apiece.

Culinarians contribute the fruits of their talents to their employers and customers with the dishes they create, but Joe Zoni of foodservice management firm SAGE Dining Services went several extra miles for the Renbrook School, where he has served as executive chef for the SAGE-operated meal program for the past 20 years. At this year’s fundraiser auction, he not only prepared dinners for contributors to take home in exchange for contributions, but also himself contributed a huge bear carving and two private dinner events that netted a total of $11,000 for the event.

Like almost every other private and public school in the country, Renbrook—a private co-ed pre-K-8 day school in West Hartford, Conn.—closed its doors in March in reaction to the coronavirus. The crisis also threatened the school’s annual fundraiser dinner and auction, which couldn’t be held in the traditional communal way with social distancing and shelter-in-place mandates in force.

“Our admissions department that normally runs our fundraiser once a year was just stymied,” Zoni recalls. “It was the beginning of April and they couldn’t have people on campus, but this dinner raises a large amount of money for our endowment.”

So they started kicking around ideas and Zoni was initially asked if he could do a video cooking demo that parents, if they want to cook at home, could watch and follow it to cook their own dishes. There would then be an online Zoom meeting where participants could virtually share a meal experience while listening to presentations and making bids at the auction. 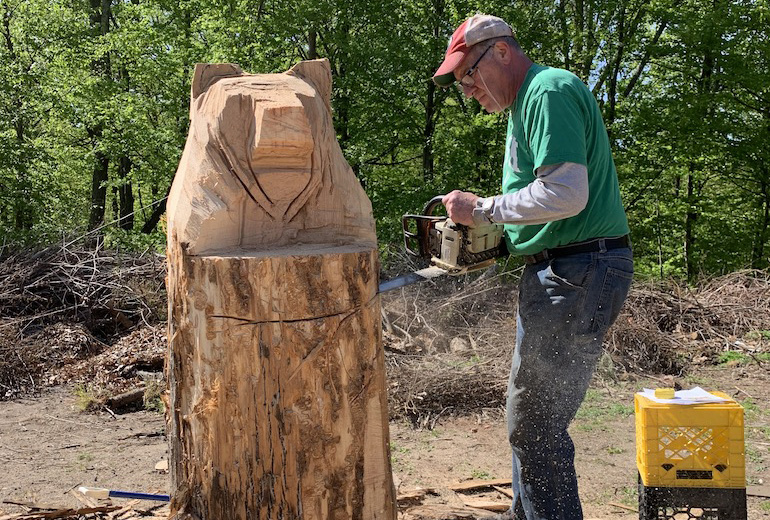 Zoni has been carving in wood and making ice sculptures for many years. The bear he created for the Renbrook auction was made from a 900-pound piece of a 120-year-old ash tree from the school grounds that had to be cut down.

However, given concerns that some participants may not be willing or able to cook on their own, Zoni was asked if he could make a meal that participants could get in exchange for donations.

Zoni ended up preparing a wide range of dishes, from short ribs to crab cakes, as well as sides and salads, that would be given to individuals based on the amount they donated. A full meal for four went in exchange for a $500 donation.

“One of the biggest sellers, for a donation of $100, was a bourbon caramel apple hand pie—we had 500 orders!” Zoni recalls.

The food was distributed outside the school kitchen door by a high-end delegation that included the headmaster and other senior administrators.

“It was a great turnout,” Zoni says. “We put the bear outside and auctioned it off at the Zoom meeting.”

Zoni is a veteran chisler whose ice carvings are very familiar to the Renbrook community, and he has also contributed wood carvings to past Renbrook auctions, but the bear auctioned this year is considerably larger than his usual contribution. It stands about six and a half feet tall and was carved it from a 900-pound piece of wood that came from a 120-year-old ash tree on the school grounds that had to be cut down.

“I saw it and thought, ‘Well, people love Renbrook and the wood was grown right here for 120 years,” so it would be perfect for an auction item, remarks Zoni, who put in some 30 hours carving the bear.

An even more lucrative auction item than the bear was a private dinner that Zoni would prepare for a group of up to a dozen in Renbrook’s Rentschler Dining Room at a date to be determined this fall. The Rentschler Dining Room is a spectacular venue that is just one of the many notable features of the Renbrook School complex, which is located on the former estate of Frederick Rentschler, co-founder of jet engine firm Pratt & Whitney. (Renbrook is the original name of the estate, and the school—then called the Junior School—adopted it as its own name when it moved to the grounds in 1956.)

“The dinner was so popular, it went for $4,000, and another group wanted it so bad they asked, ‘Would Joe consider doing another dinner for us and we’ll pony up another $4,000,’ so they sold it twice, actually,” Zoni says, noting that such cooperation illustrates the 20-year partnership that Renbrook has had with SAGE.

His usual responsibilities at Renbrook involve extensive catering as well as serving a snack breakfast and full lunch for the some 400 Renbrook students and the 90-person staff, who get their meals for free as part of their compensation package.

A Johnson & Wales graduate, Zoni came to Renbrook from a private country club 20 years ago. “I did high-end dining there for 10 years for people like Tom Brokaw and Ivan Lendl, and before that I ran a restaurant for 10 years,” he notes. “At first it was weird going from the Friday night grill room with truffled potatoes and short ribs to coming here and making macaroni and cheese for 500 or 750 grilled cheese sandwiches,” he laughs. “It was definitely a change!”

But then, it’s not all mac and cheese or grilled cheese sandwiches at Renbrook either as the lunches regularly incorporate more sophisticated fare such as carving and action stations and salmon or swordfish every Friday.

“The kids here are used to going to restaurants,” Zoni remarks. “They’re foodies too, believe me!”