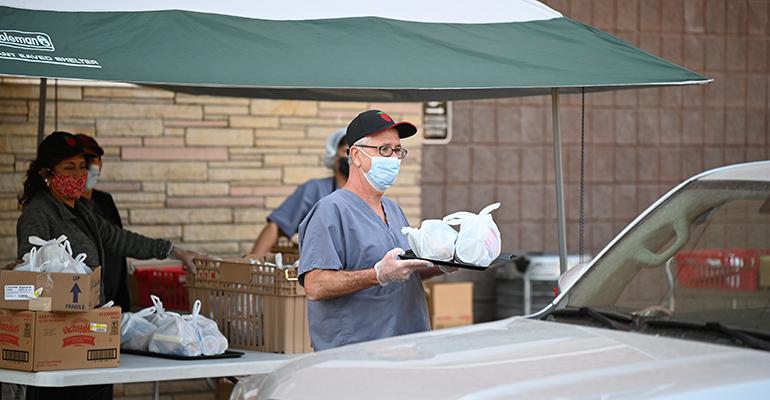 It only took one day for Salt Lake City Public Schools to organize their remote school meal operation when the district shut down last March. Since then, they’ve operated 22 grab-and-go sites where families of the district’s 25,000 students can pick up daily meals. They also send meals out to four remote locations by bus.

Kelly Orton, director of child nutrition, says the district has consistently planned, packed and delivered meals since the start, despite a 5.7-magnitude earthquake that shook Salt Lake City in mid-March and hurricane-force winds in early September that caused widespread power outages.

Salt Lake City School District operates a successful summer feeding program, so they already had much of the equipment they needed, such as hot food containers and rolling carts. They also had vehicles equipped to transport food and an abundance of cold storage.

Staffing is a different story. The numbers have been down since March. They typically have 162 workers. Right now, they have 120, which is affecting their ability to distribute meals at more of the district’s 37 schools. For the well-being of their workers, they’ve pledged not to terminate workers who decide to stay home because of the pandemic. Some returned in September, but they’re still shorthanded. 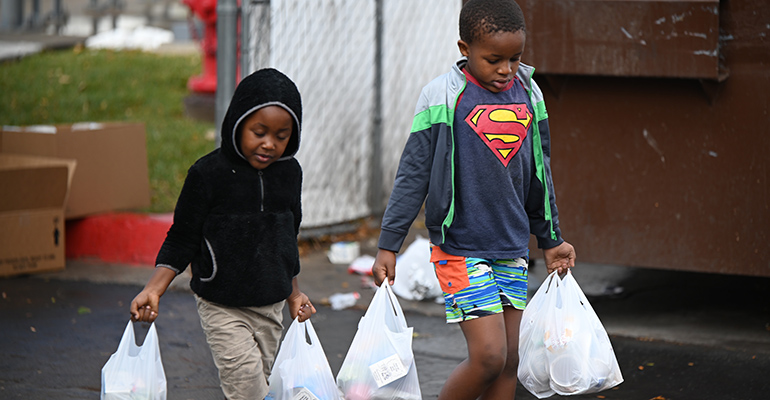 Kelly Orton, director of child nutrition, says the extension of the summer meal program has helped them serve more students in the community. “The federal government stepping in and making all meals free is the best thing they could have done.”

But nutrition employees continue to show up, standing six feet apart and packaging individual servings. The district follows strict hand washing, distancing and masking guidelines. As of early January, no dining employees had passed COVID-19 to another employee.

On pickups days, they store hot and cold food items in separate insulated boxes at the curb or other pickup location and pack bags to order as families arrive. To make it happen, they set out staging tables with staff who pack the bags and runners who hand them to recipients, whether they’re on foot, on bikes or in a car. 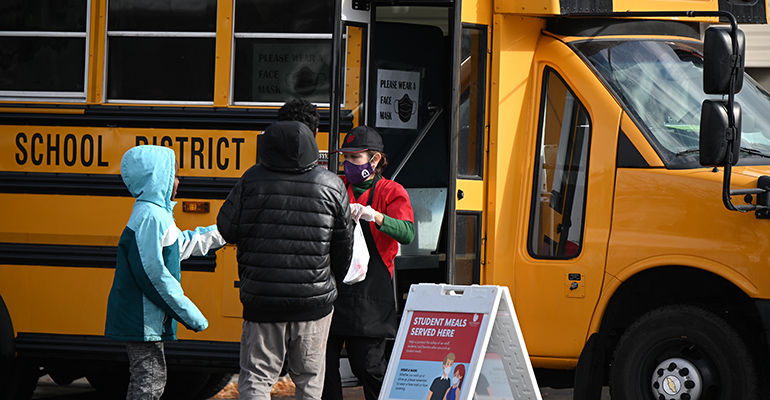 The district partnered with the Utah food bank to supply not only lunch and breakfast from the district but also pre-packaged dinners that families could pick up along with school meals. And through the Food for Families program, they distribute emergency food every other week at various community learning centers and apartment complexes in the city.

When the pandemic first hit, the district used as much warehouse inventory as they could. When they started ordering supplies, it was a challenge to obtain everything they needed for grab-and-go meals. Sometimes utensils, cups, lids or bags were rationed. Orton says the supply chain is more stable now, though their suppliers did run out of individually packaged applesauce last month. (They replaced it with cupped fruit from the USDA or whole fruit, such as apples, oranges, nectarines, pears or bananas.)

The menu is a rotating selection of student favorites: deep-dish pizza, chicken nuggets, crustless peanut butter and jelly sandwiches and breaded cheese sticks. There’s some comfort food, too: baked chicken with a corn muffin, a plum and baby carrots and a

“Rib-B-Q” sandwich served with potato wedges and baked beans were on the menu earlier this month.

As some students return to classrooms in Salt Lake City this month, the nutrition department plans to serve the same packaged meals to in-person students as they deliver to remote learners. For the first half of the day, nutrition workers will focus on serving breakfast and lunch to in-person students. At mid-day, they’ll switch and focus on daily meal pickups. Orton says they anticipate a 15-minute transition time between in-person operations and the grab-and-go program. 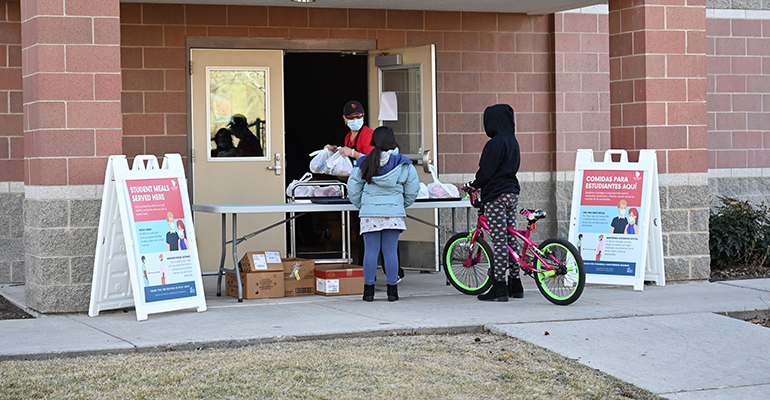 The menu is a rotating selection of student favorites.

Each school determines for itself where students will eat. Some schools have designated half their gyms for lunch, with tables spaced far apart. Others plan to have students eat in classrooms, using partitions. High schools in particular will likely allow students to congregate distantly for lunch in hallways.

Orton says participation is stable. The numbers are down—they’re serving roughly half the number of meals as this time last year—but Orton believes many students ate at school because it was convenient and that for many, it’s now more convenient to eat at home.

“I believe because of the efforts we’ve made to push this out, those who really need it are getting it.”

When the government extended the summer meal program, so districts can offer free meals to anyone 18 and younger, it helped the district focus on safety and delivery systems.

“The federal government stepping in and making all meals free is the best thing they could have done,” says Orton. “The waivers made it possible to reach out to the community. I’m just grateful. It’s been amazing.”