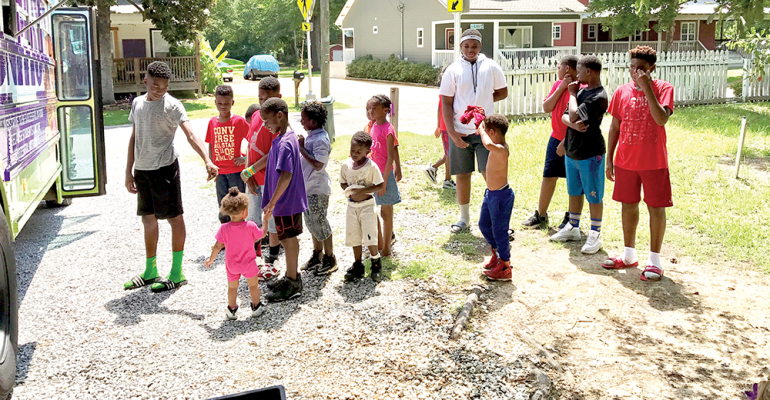 Tuscaloosa Schools can take its school nutrition program to more places around the district thanks to a fully outfitted, repurposed vehicle.

Donette Worthy is passionate about serving the kids in Tuscaloosa County Schools in Alabama, for which she serves as nutrition services director. The county includes the main campus of the University of Alabama, so one would think it was fairly well off economically, but that isn’t necessarily the case as there are significant pockets of poverty.

While district sites all serve meals during the school day, Worthy was worried about getting nutritious food to needier students the rest of the time, including summer meals, dinners and even breakfasts. One solution, she decided, is to go where the customers are, as the old business motto has it, and that meant taking the school nutrition show on the road.

How? With a mobile feeding platform. 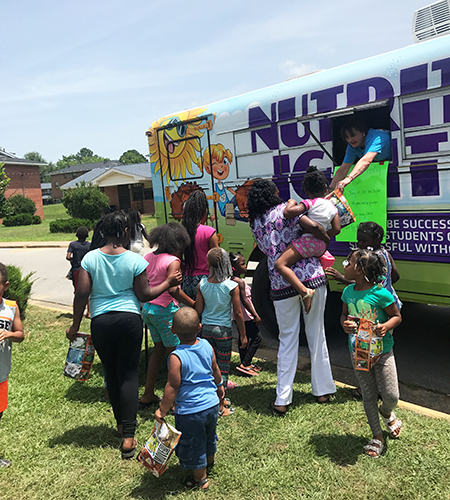 The bus allows the school nutrition program to reach more kids when they are away from school, such as after school and during the summer.

Unfortunately, vehicles, especially those that need to be fitted out to serve school food, can be pricey propositions, but Worthy is nothing if not creative and an out-of-the-box thinker.

So, instead of going the purchase route to get a vehicle, she turned to an often-overlooked in-house alternative: the district transportation department, which retires and replaces its school buses on a regular schedule. The retired buses are still perfectly operational and the department was happy to donate one to benefit the kids, Worthy says.

“We have a very supportive school system, and they just got 72 news buses, so the old buses are usually taken to auction, but they held one back for me,” she explains. “That’s how we’ll be getting a second one as well next summer.”

Of course, securing a vehicle is just a start. It still has to be equipped, and in this area Worthy also turned to in-house sources.

“Everything on our current bus is either from our maintenance warehouse—things that weren’t being used—or one of my managers let me know about a piece of equipment that wasn’t being used in their kitchen, so we were able to pull it.”

During the past school year, the bus was used to provide meals during field trips and on field days when students leave schools to engage in various activities. In the coming school year, it will serve as a platform for the district Super Snack (supper) program.

“We currently offer Super Snacks in all of our afterschool programs but some of our kids, especially in our higher poverty areas, are not a part of the after-school care program and they go straight home,” Worthy explains, “so we’re going to take the mobile feeding bus and add a route for the afterschool care meals.”

One snag Worthy ran into was that she lost her regular bus driver to another job, but was able to find a retired bus driver willing to operate the vehicle at least on a part-time basis. Fortunately, because the bus doesn’t transport kids, the driver needs only a standard commercial (CDO) drivers license, not a school bus driver license, and Worthy suggests that asking around a typical school nutrition staff will often yield several individuals who have such certification, thus making them candidates for driving a bus that transports meals, as long as they don’t transport students.

With a driver secured at least for part of the time, Worthy is looking at using the bus in the mornings this fall to serve breakfast at the six district high schools on a rotating basis.

“A lot of the high school students drive and they tend to crowd out in the parking lot [until school begins] to talk and hang out,” she says, “so we’ll try to get breakfast to them there, though not every day. Instead, it would kind of pop in, and we’ll try to make it a big deal out of it and let the kids know when it’s coming.”

The breakfast menu served off the truck will be distinct from what is available in the cafeteria that day to add exclusivity to the truck’s presence.

Meanwhile, meal counts from the bus have been going great guns this summer, with participation numbers tripling over last summer, thanks to greater awareness and the addition of several more stops to the daily round. Worthy plans to add even more stops next year after a second bus is secured. This summer, the bus has been making 13 daily stops at eight sites, with five sites getting visits for both breakfast and lunch and three others for lunch only.

“Within the first three weeks we had already surpassed what we did all last summer,” Worthy reports of this year’s results. The vehicle makes stops at Tuscaloosa County’s highest poverty areas, often near public housing complexes where the nutrition team has built relationships with parents and guardians to guide the kids over to the bus and help watch them.

“They are very helpful and grateful for what we are doing,” Worthy offers.

Food is served through a window and the children eat nearby, as required by government regulations. They are encouraged to stay near the vehicles with attractions ranging from playing music to offering games with prizes and making toys like mini footballs available. Counts at the individual stops range from up to 120 a day at some to others with maybe 30 to 40, Worthy says.

The menu includes entrees like chicken sandwiches, hamburgers, hot dogs and Uncrustable PB&J sandwiches, a kid favorite that was not on the original menu but was requested by several youngsters and has been one of the most popular selections.

One factor Worthy cites as significant to the success of the bus is its branding. It was christened Nutrition Ignition by students.

“We’ve allowed our students to be part of our branding and it was probably one of the best decisions we made,” Worthy offers. “The kids actually got to name it and design the [graphics], so they know it’s their bus. They take ownership in it and great pride in it and get very excited when it comes around. For anyone who wants to create a mobile feeding bus, that to me is just as important as the equipment you put on the inside.”