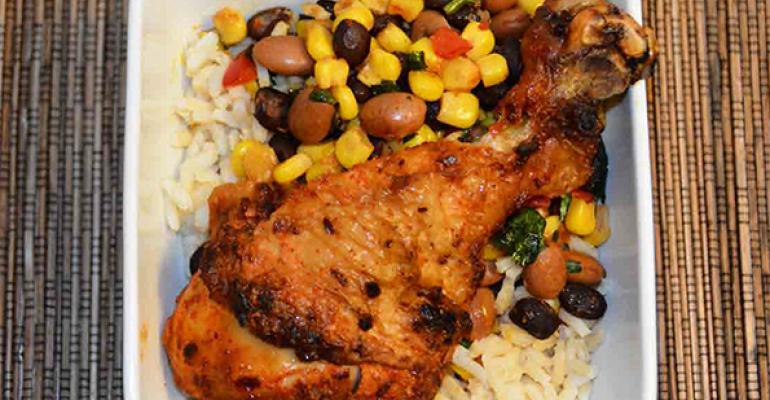 As halal continues to move from religious constraint to cultural lifestyle, one high school in San Diego is well ahead of the curve.

The bowl, which features a halal chicken drumstick from vegetarian-fed, antibiotic-free, hormone-free, air-chilled organic chickens raised in California, was added after months of working closely with the Mid-City Community Advocacy Network (CAN), a community collaborative based in City Heights.

The group was adamant about the school offering a halal protein to students, the bulk of whom follow a halal diet.

“We talked about fish and vegetarian options,” Petill says. “But they want protein for their kids—either beef or chicken.”

So Petill went to work with the culinary team developing a dish that was both culturally appropriate and downright delicious. They followed the correct halal guidelines, which dictate that the halal chicken is prepared and served independently of other, non-halal meats. At Crawford, foodservice employees are especially careful about cross-contamination. The halal chicken is prepared separately and cooked and held in ovens that aren’t used for any other preparation on the days the halal menu is served.

“We did tastings with students and surveyed them to get the exact flavor profile they wanted,” he explains. “That was one of the biggest contributors to the success of this pilot.”

While the halal drumstick cost the school 19 cents more than a conventional drumstick, the department     was able to make up the cost with increased participation.

“I think one of the most surprising parts of this story is that many of the students who chose the chili lime chicken bowl weren’t Muslim,” Petill says. “They saw something new, they wanted to try it and they liked it.”

Leading up to the start of the pilot, a group of students launched a grassroots promotional campaign to raise awareness of what the foodservice department was doing.

“There’s no better marketing than your customers doing it for you,” Petill says. “It created a lot of awareness around us. It showed that we are willing to work with our communities and our families to feed our kids the best possible options.”

At the end of the school year, Mid-City CAN hosted a celebration in honor of the pilot. “Some of our board members attended as well as 50 or so parents,” says Petill, adding that a costumed halal chicken even made an appearance.

Going forward, San Diego USD plans to continue the pilot for the first few months of the 2015-2016 school year. The district also plans to roll out a non-halal version of the chili lime chicken bowl to the rest of the district.

“We’re looking to bring the dish to our middle and elementary schools in City Heights, too,” Petill says. “If it means our students are going to eat with us more frequently, then we’re going to do go above and beyond to make them happy.”