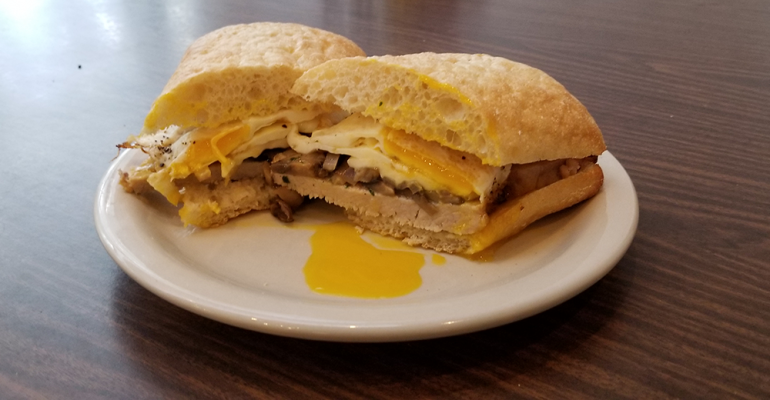 The Ye Pork sandwich is a tasty example of history brought to life through food.
News & Trends>K-12 Schools

From ancient Rome to Medieval times and the Civil War era, Metz Chef William Woods has turned the kitchen into a time machine.

William Woods, chef with Metz Culinary Management at the Kiski School, a private boys’ boarding school in western Pennsylvania, has a collection of old cookbooks. And we’re talking really old: medieval times old. He’s used these cookbooks, along with other resources, to bring students on a time-traveling adventure of the culinary kind. One example is the Ye Pork sandwich, something straight off of King Arthur’s round table, stuffed with roast pork loin, mushrooms, onions, eggs and mozzarella cheese. Woods first got interested in medieval cooking while he was working at a Renaissance faire, and from there, things really took off.

Q: How did you come up with the idea for the Ye Pork sandwich?

Related: Digging up a secret food history on campus

A: I had been experimenting with the pork recipe by itself one night and as my wife and I were eating it, we talked about how it would be good as a sandwich. I found other medieval recipes for onions and mushrooms, and decided to add them in.

Q: Why did you think your audience (kids) would be receptive to historic foods?

A: Honestly, I thought they would like a pork sandwich more than a historic sandwich. Usually whenever I do make anything historic, I don’t tell people a time period or “this is medieval” because when I do that, a lot of people suddenly don’t want to try it. It’s only after they have had it that I get the reaction of “that’s really good” and then I tell them, “Oh, it’s from this time period.”

Q: Why don’t they want to try historic foods at first?

A: The instant I tell anyone that I do historical cooking, they immediately say, “Oh, they only ate porridge” or “they ate rotten meat.” And I have to explain a lot of what they did eat and even then, people are still skeptical, so it’s a lot easier to make it and have them try it first, then tell them, which is a fun surprise factor of A, that was really good and B, that’s medieval, really?

Q: Is that how you introduced the Ye Pork sandwich?

A: Yes. I usually have a signage that tells the kids what’s in a sandwich. The first day [we offered it] it just said, “pork sandwich.” The next day it labeled “Ye Pork sandwich” and described its origins. A lot of kids were very shocked. But so far, the reaction has been good. I’m planning more ideas to see how it goes.

Q: Where did you do most of your research?

A: When I first became interested in historical cooking, I used a lot of different websites. But now, I have a small library that is purely medieval cookbooks. I also use a lot of cooking texts such as The Flavor Bible and Cookwise.

Q: Did you cook the recipe exactly as you found it? Were there any adjustments for K-12?

A: Fairly closely…there were a few minor changes to the recipe, with different spices added. Adjustmentwise, a lot of that was primarily increasing the amount of food as the recipe I normally use is good for four to six people and I was feeding 140 students.

Q: How are recipes different now than they were in medieval times?

A: Recipes from medieval times are very vague. A typical recipe may discuss the ingredients, but never tells you the amount of what you’ll need. And sometimes, the recipe will mention a different recipe, but it won’t tell you what it is. For instance, with the mushroom recipe, there is a mention of a cooking broth to use. There are various interpretations of this, from a simple chicken broth to using specific recipes in other cookbooks. It does make trying to create these recipes difficult at times.

Q: Are you particularly interested in that time period?

A: Yes. Initially I had worked at a Renaissance faire and was intrigued what some of the players were setting up for a lunch. I started looking into recipes and it just amazed me, all the different things that were made in that time period. When the faire was starting the next year, I asked to be the cook for the “Queen of England” and prepared several different feasts throughout the season.

Q: What other culinary time travel have you done?

A: I’ve played around with recipes from ancient Rome to the early 1900s.

Q: What are some other recipes from the past you’ve tried?

A: Some other recipes I’ve done include medieval French toast, ancient Roman pesto and I did various types of hamburgers going through different time periods to the 1890s.

Q: What’s a historical period you might research next?

A: I’ve looked at the Civil War time period, I’ve always had a big interest in that time in American history.