The Mt. Lebanon School District turned to University of Pittsburgh Dining Services to add a sports nutrition layer to the district’s athletics program.

Athletic Director John Grogan and Food Service Director Nolen Fetchko of the Mt. Lebanon School District in Pennsylvania had been working for the better part of a year to figure out a way to add a sports nutrition layer to the district’s athletics program. Enter the University of Pittsburgh (Pitt) Director of Dining Services Joseph Beaman, who reached out to Fetchko to inquire about the possibility of a partnership between the district and the university, which was looking for ways to foster relationships between itself and the surrounding community.

Thus was a beautiful partnership born, producing a K-12 food service program called Game Day Meals that focuses on several factors of the meals being served at the schools. They include the use of unprocessed or minimally processed meats and other proteins, fresh (and preferably local) fruits and vegetables and all whole grains. They also use no starchy components such as corn, french fries and mashed potatoes, and cheese cannot count as meat and meat alternative components.

“The goal is to provide students with a healthy, wholesome meal,” Beaman says. “In some cases, this may be a student’s last hot meal until returning to school Monday morning.” 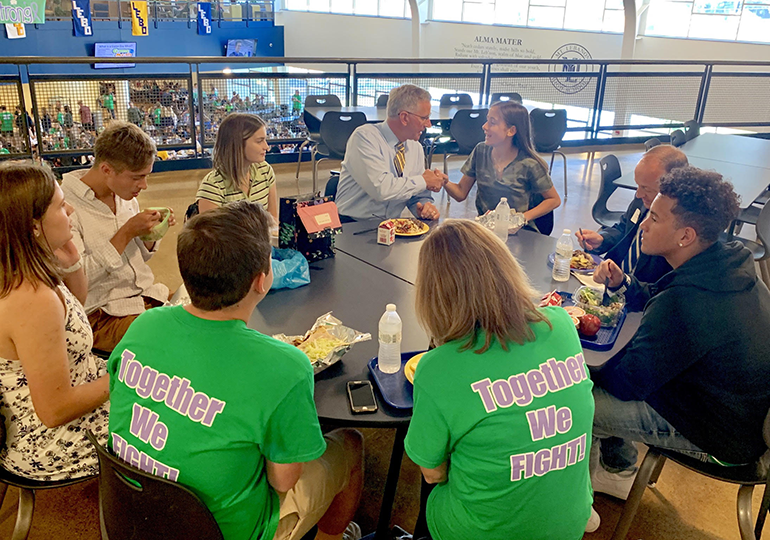 Pennsylvania Secretary of Agriculture Russell Redding came to Mt. Lebanon High School for a ribbon-cutting event to kick off the Game Day Meals program and stayed to have a Game Day Meal lunch with students.

The meals, which fit within the guidelines of the National School Lunch Program, are served at lunch on Fridays at Mt. Lebanon High.

“We chose Friday because many of our free/reduced students may not have a wholesome, hot meal throughout the weekend,” explains Fetchko. “By having Game Day Meals on Friday we are giving these students in need one last, nutritious meal that may be their last good meal until they get breakfast at school on Monday morning.”

The program is also available to other districts, which can incorporate Game Day Meal recipes into their menus on whatever day(s) they wish and not at just the high school level.

“Despite the name Game Day Meals,” Fetchko says, “this program is for everyone—band members, athletes or any student who needs to be at peak performance for an upcoming test.”

That latter dish happened to be on the menu when Pennsylvania Secretary of Agriculture Russell Redding came to Mt. Lebanon High School for a ribbon-cutting event to kick off the Game Day Meals program there, joined by his team, district administrators, Pitt officials and executives from several of the district’s food providers. Secretary Redding spoke to a room full of students, enjoyed the Korean beef/brown rice lunch with several others, then joined a group for a ribbon cutting to mark the beginning of a program that is estimated to be available to 50,000 students in western Pennsylvania by the end of the fall.