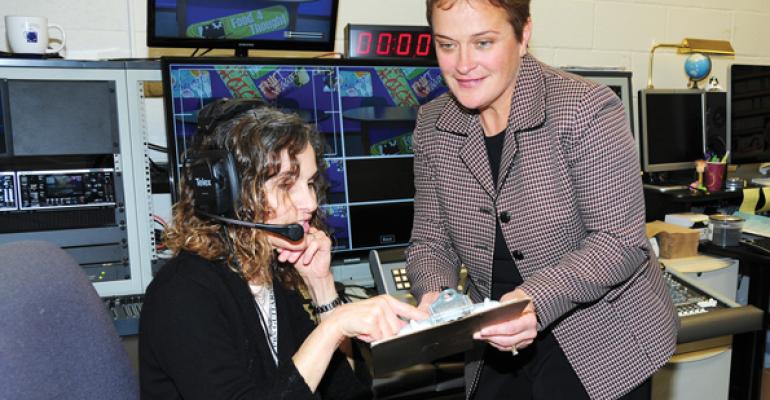 <p>Anne Arundel Cty. Schools FSD Jodi Risse hosts a local cable program in which she interviews guests and plans out each program with her producers</p>
News & Trends>K-12 Schools

School Foodservice Director Takes it to the Airwaves

At her day job, Jodi Risse directs the nutrition services program for the Anne Arundel (MD) Public Schools. It’s quite a job as Arundel is one of the country’s 50 largest districts with an enrollment of around 78,000 and almost 120 school sites. Risse’s department has an annual budget of more than $25 million and it serves in excess of 40,000 meals a day.

But Risse also has another role in support of the district nutrition services program: that of host of a local cable program called Food-4-Thought. The topics all have to do with school meals and nutrition.

“I just thought when I was named program supervisor back in 2007 that we needed a better way to communicate with our parents and our community,” Risse says of the program’s genesis.

The district at the time did have a cable program but the nutrition department had “zero presence” on it, Risse recalls. Initially, she just asked for a short 15-minute segment at the beginning of each year to welcome students back.

“They said they loved the idea and noted that they didn’t have a program geared toward nutrition, physical activity and healthy lifestyles. So they asked if I could do not just one a year but one a month.”

The first show was taped in the summer of 2008. Initially, it was a 15-minute block with a healthy lifestyle message, from local produce to mental health and wellbeing to sleeping.

Risse recalls that her first guest was the district superintendent at the time, Dr. Kevin Maxwell. Other notable guests since have included Rep. John Sarbanes (D-Md.) and Dr. Nancy Grassmick, the Maryland state superintendent of schools.

One memorable segment was taped at a local farm. “We spent a morning at the farm with the feeding of the dairy cows,” Risse recalls. “That gave us public service announcements encouraging the consumption of milk and starting your day right with breakfast with the cows in the background.”

Another took place at a bakery that was supplying Anne Arundel lunchrooms with whole grain bread options.

The show is now half an hour in length and runs all year, three times a day. The tapings are every other Tuesday at 10 am.

The routine usually involves meeting the day’s guest about an hour before taping at the studio in the district BOE building in Annapolis, Risse says.

The shows are all listed on the district website at AACPS.org.