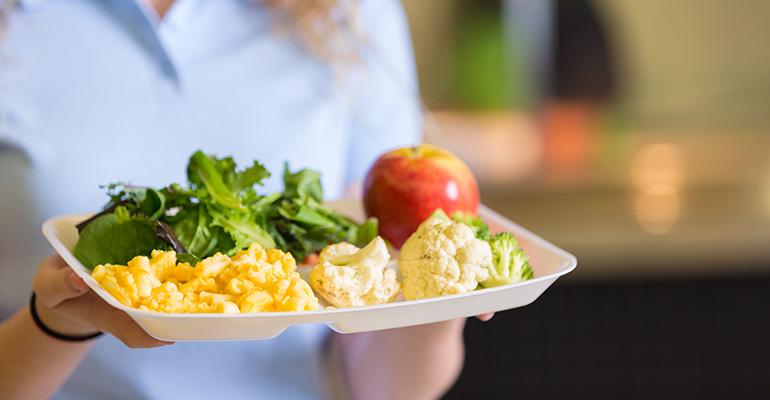 A new study shows that in the long run, the benefits of feeding kids free school meals would outweigh the costs.

For years, child nutrition advocates have been asking for universal free meals for all students. This grand idea has always been thought of as the be-all end-all solution for advocates of school meals, who say these programs are largely unfunded, overregulated and underresourced.

The big hindrance has and will always be cost. As the National School Lunch and Breakfast Program are federally funded and run programs through the USDA, a universal free meals program would incur more funding than the current program. Advocates always say the benefits outweigh the costs. But those were always anecdotal, and anecdotal doesn’t fly in Congress and funding appropriations.

So the School Nutrition Association (SNA) decided to put research behind its lobbying efforts into universal free meals. The initial results of this research were shared to a crowd of 850 at the association’s Legislative Action Conference (LAC) in Washington, D.C., today.

While the research still needs to be peer-reviewed, the top-line message was the benefits of a universal free meals program will outweigh the costs—in time.

That’s according to Jonathan Gledhill, president of Policy Navigation Group, the firm with which SNA contracted to conduct the research. Gledhill has plenty of experience working through cost analysis issues from his work at the Office of Management and Budget (OMB), the government office that is required to look at the budgetary impacts of every piece of legislation.

Now, before child nutrition advocates get too excited about the results, there are some clarifications and hurdles that will have to be addressed.

First, let’s take a look at what cost actually means in terms of OMB. According to Gledhill, “costs” means all the social costs of implementing a universal free meal program, aka, the real resources everyone involved must spend to receive the benefits. That includes groups like parents, school boards, the USDA and child nutrition professionals, not to mention the costs associated with serving more meals (studies show that offering free meal programs increase participation, but more on that to come later).

The second part of the analysis is benefits, which to OMB means the real resource gains to society, or in other words, how will society be impacted in term of resource gains in areas like productivity and the avoidance of diseases.

So Gledhill and his team started looking into studies that have already been conducted to determine the cost-benefit analysis. Due to the nature of the school meal programs, much data is already collected through the USDA, so they had a good starting point.

One area to draw comparisons from would be the impact of CEP or Community Eligibility Provision, which allows districts to serve free meals to all students regardless of payment status if the level of students who are eligible for free or reduced meals is at least 40%. This was a new program initiated by the Healthy, Hunger-Free Kids Act of 2010.

From CEP, a form of universal free meals, Gledhill says studies found that there were positive societal impacts, including students graduating from high schools. However, because CEP is a relatively new program and we haven’t seen the impact CEP has on students as they become adults, it’s hard to associate lasting positive incomes with CEP. In addition, due to privacy concerns, it’s difficult to associate individual health gains with test scores. Again, the OMB looks at societal gains, so having higher test scores in high school is great but what does that mean for students later in life? If the associated can be made between higher test scores and better health later in life, that would be a benefit under OMB.

So while universal meals does have intermediate benefits like higher math, reading and science scores; fewer absences; and fewer behavior problems, what does that mean in terms of social benefits later in adulthood?

There are some conceptual benefits to universal meals, including that families will have more income (if they aren’t paying for school meals that’s money back in their pockets), students will have higher test scores.

One concern Gledhill has is that some studies show school meals help in terms of children’s BMI, while others show the opposite, so they are more focused on the academic results right now because they are better associated with the studies that are available today.

Another cost that must be taken into account is that when price falls to zero for school meals, studies show that participation increases, which adds costs to school meal programs. Using CEP as a model, Gledhill predicts participation will increase between 1% and 12% under a universal meal program.

So taking all those impacts into consideration, Gledhill says that currently the costs of a universal free meals program are in line with the benefits. However, he does expect that over time, the benefits would be two to three times greater than the costs. That’s reflective of the fact that it will take until adulthood for many of these societal benefits to take fruition.

The challenge then becomes getting Congress to approve a program for which the benefits would not outweigh the costs today. “The policy change [of implementing universal free meals] would be almost all costs, with some administrative savings. Unfortunately, the increased tax revenue from UM [universal meal] students with higher productively is not within the current appropriations window,” Gledhill says.

Gledhill says the next steps to implement a universal meals program in schools would be pairing analysis and advocacy. “Analysis can only take us so far. There’s a point where the numbers end and the experience takes over. And that’s where the advocacy comes in.”

To that end, SNA members will visit their representatives in Congress tomorrow, lobbying for many initiatives, including the implementation of universal free meals.