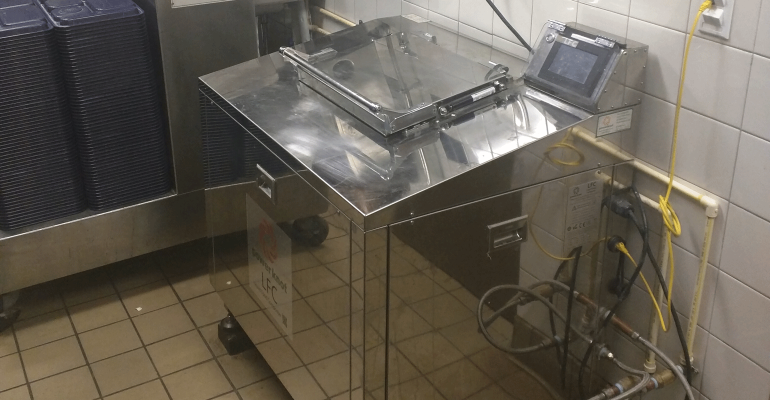 The liquid food composting (LFC) system at Arthur I. Meyer Jewish Academy in Palm Beach Springs, Fla., has already paid for itself in a year and a half of use. The school has saved an estimated $5,000 per year by not having to pay to have so much trash hauled away. The drain-safe “gray water” that is produced as the end product can be used to irrigate and nourish school gardens. And it’s good for the environment too, cutting carbon dioxide emissions by about 18 tons per year and diverting solid waste from landfills.

“I would say it’s a wonderful investment for any school district,” says Lindsey Ilarraza, kitchen manager at the school. “It’s a great learning experience for the kids. They’re seeing that not everything has to go to the landfill at the end of the day.”

The foodservice team adds food scraps into the bio-digester machine (pictured) as they prepare meals, between 13 and 60 pounds each day, depending on the meals they’re making.

“On a heavy prep day, more food-prep waste goes into the machine,” Ilarraza says. “We load the machine periodically during the day, preparing meals in the kitchen around 6:30 a.m., and placing bins at our workstations for the food waste.”

After lunch, food waste from the cafeteria trays are sorted by kids and staff and also diverted into the machine, a self-contained unit with a hatch on top where the food scraps go in. The compost is mixed by the machine, and a computer screen shows how much food waste is currently in the system and how much more can be added.

Specially engineered enzymes within plastic cartridges inside the machine “digest” the food scraps as it churns. A filter keeps out any non-compostable materials that may have sneaked in, and a plastic pipe takes the water away—for now it goes to a floor drain, but in the future, the school is looking at using the water to irrigate the school garden.

It’s been easy to use, and a chart is posted with info on which items can and cannot go into the machine, which has been helpful for staff, Ilarraza says.

“So long as you keep feeding the machine to keep the enzymes alive, you’re good to go,” she says.

The LFC has meant saved time and money on regular garbage pickups, Ilarraza says. “We used to take out the trash three to four times a day. Now, we empty our garbage cans once a day, which allows us to schedule fewer garbage pick-ups in a week. Most of the time, only one.”

Environmental learning has been another benefit, according to Natalie Barak, director of advancement at Meyer Academy.

“I’ve even noticed for myself that it makes me more conscious,” Barak says. “It makes you very aware and the kids are trained to separate the food. They learn about environmental responsibility and they see that we’re actually doing something about it.”