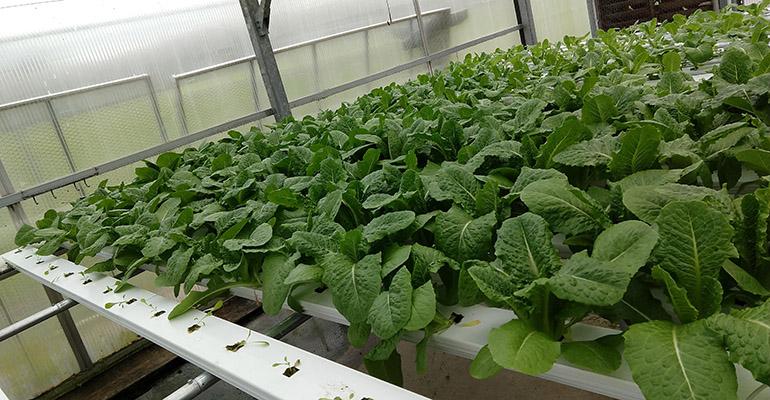 Students at Cypress-Woods High School in Texas are taking home-grown lettuce to another level with onsite gardening production.

The students at Cypress-Woods High School in the Cypress-Fairbanks Independent School District in Texas eat a lot of romaine lettuce, and their needs for the leafy green staple are now satisfied by a pilot hydroponic gardening program launched last summer in the school’s greenhouse.

There, up to 40 pounds of romaine is produced in each weekly harvest, grown from rockwool plugs fed completely by water laced with essential nutrients, but without soil that can cause the kind of health hazards that have been associated with commercial lettuce production recently.

“We serve a lot of romaine in the district,” she observes. “It’s something the kids like and it’s familiar, so that’s what we decided to start with.”

It apparently wasn’t a difficult call.

“From the amount of lettuce we use—about 33,000 pounds a month districtwide—we’ve often joked that we could run our own farm and provide all of our own lettuce and have a complete functional farm,” Durand says. “Plus, with all the lettuce recalls, we thought, why not go hydroponic, as it doesn’t have any dirt.”

The initiative came about when Cypress-Fairbanks was selected as a pilot site for a garden-to-cafeteria project by the Whole Kids Foundation last year.

“We told them, ‘Yes, if we could get it for a hydroponic greenhouse,’ Durand recalls. “We were kind of joking, but they told us that they had actually worked out a proposal with Denver Public Schools [on a hydroponic project], but they didn’t take them up on the offer. So we said, ‘Well, we wouldn’t mind trying it out and see if we could get a proof of concept to try to expand it down the road.’”

So the nutrition team calculated how much romaine Cypress-Woods High School—which was chosen as the pilot site because it already had a greenhouse on its premises—went through, and used that to determine how much hydroponic equipment would be needed to supply the school’s needs.

The district worked with a commercial greenhouse operator, Leaf Safari, on set up and installation while another commercial enterprise, Dyne Aquaculture, consulted on equipment purchasing.

Durand says the equipment cost just under $12,000, but that is an investment that will yield increasing returns. “With hydroponics, it’s really a numbers game,” she explains, “because once you have this equipment, the more you grow the cheaper it becomes due to economies of scale.”

In addition, as horticulture students from Cypress-Woods care for and harvest the lettuce, the program provides benefits that are not just nutritional or financial but also academic.

“It’s something that we would like to expand into a career/technology program for the district, Durand adds, “but right now we’re still in our proof of concept. However, we have pretty much proved that with the hydroponic system, you can grow enough lettuce at this small high school greenhouse to provide all the lettuce that its cafeteria needs for the week.”

There have been discussions to expand the program to other crops such as strawberries, tomatoes, herbs and various lettuces, but “the nutrient profile has to be similar, at least in the base that you’re growing,” Durand explains, “so if we were to switch, we would have to get new equipment for it.”

Plans do call for eventually expanding the hydroponic program to other high school sites.

“We have a bond issue out and they are requesting additional greenhouses for the high schools, so there’s a lot of excitement about the program in the district,” she says.