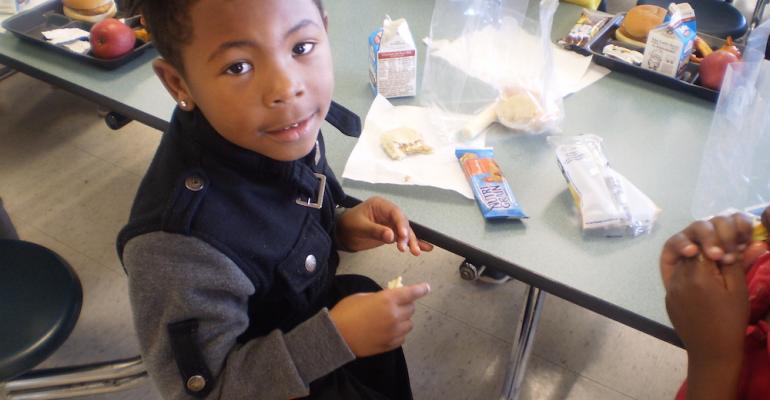 “Super Sacks” meet all the USDA requirements for a full meal reimbursement.

There’s a new lunchtime superstar in the Baldwin County School (BCS) district in Milledgeville, Ga. It comes in a clear plastic bag and it’s served cold.

Dubbed Super Sacks, these bagged lunch alternatives meet all the USDA requirements for a full meal reimbursement. They contain a meat or meat alternate, vegetable, fruit, grain and milk.

“I had heard about a similar program at the Georgia School Nutrition Association’s conference last fall,” says Susan Nelson, school nutrition director for BCS. “The idea was initially to offer the sack as a complement to a lunch box brought from home. The student would bring in his or her favorite sandwich and we would provide the sides.”

But the program—and the sacks—has evolved into more than just a series of sides.

“We began to offer Super Sacks in October three times a week in four of our elementary schools— Eagle Ridge, Midway, Blandy Hills and Creekside,” Nelson says. “All the children wanted one.”

So the school responded by positioning the sacks as a meal alternative in addition to a supplement for meals brought from home. They haven’t replaced hot meals, and they’re only served a handful of times each week, but they’re adding tremendous value to the students’ lunchtime experience by expanding choice without much extra work, effort or cost on the part of the district.

“The food cost on the sacks is around 38 percent,” says Nelson. “And we serve about 200 per day in each school.”

That amounts to 2,400 Super Sacks served each week. What’s more, the sacks are helping to reduce plate waste.

“During a recent plate waste study, we found that students are eating 100 percent of the sack meals and only around 60 percent of hot meals,” Nelson says.

A sample Super Sack includes yogurt, a cheese stick, whole-grain granola, fresh berries, milk and carrot sticks with low-fat ranch dip. The district has continued to serve the sacks three times a week at its four elementary schools, but there are immanent plans to expand the program.

“It's great to be able to offer a cold meal option for our students and they have responded positively,” Nelson says. “We’re in the process of developing a similar sack meal to serve in our junior high and high school levels. Our student food advisory committees at each school will provide input on what they would like offered in the bags. And we plan to start serving in the upper grade levels before the end of the year.”