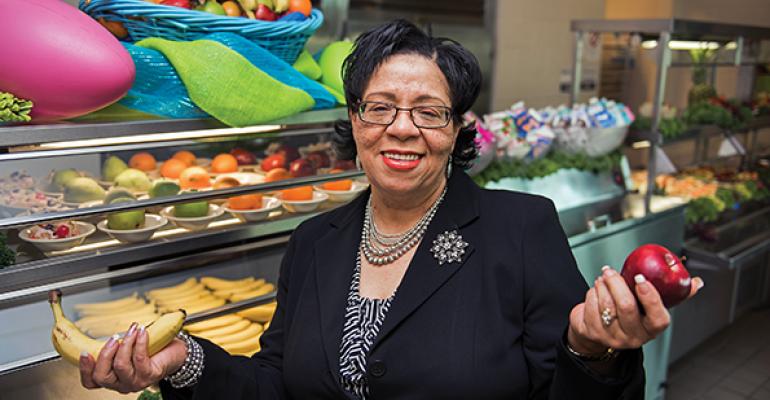 When you spend your entire career with one company, you’re bound to see some ups and downs.

“I’m not going to tell you the number of superintendents I’ve trained over the 32 years [I’ve been with Jackson Public Schools in Mississippi]. We’ve gone through leadership, both in the city and in the schools. We’ve gone through a number of curriculums. The foodservice program has gone through a number of changes with the different regulations,” Mary Hill, executive director of foodservice for Jackson Public Schools, says. “My whole goal through the years is what is for the betterment of the children.”

And that’s how Hill sees the thousands of students who have come through her lines on a daily basis—as her children. In a community where 90 percent of students qualify for free or reduced-priced meals, the child nutrition department is such an important aspect in the students’ lives, and Hill will do anything to ensure that her “children” are well fed and healthy.

For her efforts, Hill was named the 2015 Silver Plate winner in K-12 Schools.

It all starts with making sure kids have as many points of access with the child nutrition program as possible. Nearly half of the schools are on the USDA’s Fresh Fruit and Vegetable Program, meaning they get to try fresh produce they might not see otherwise in the program due to the higher cost. “We can do a lot more choices, like the pineapple pushups and the grapes in a bag and the cut-up apples. The prepackaged fruit is expensive.”

Nearly a third of the schools offer breakfast in the classroom. The program can be a tough sell to principals and school administrators, but Hill found a persuasive way to keep them from saying “no” outright.

“I got with those principals and said, ‘I’m not looking for you to do breakfast in the classroom throughout the whole school,’ because I knew I would have some [pushback],” Hill says. “I always tell folks it’s almost like going in the back way. I said, ‘Give me two grade levels and let’s look at the success of those two grade levels.’ ”

This is also the first year that Mississippi foodservice programs can offer the Community Eligibility Provision (CEP), which allows districts to serve all students for free regardless of their payment status and eliminates the need for families to fill out income eligibility paperwork.

“It’s been the best thing since sliced bread,” Hill says of CEP. “I’ve always been for universal feeding. I just have the philosophy that if children come to school and we don’t charge them to ride a bus, we don’t charge them for school books then we don’t need to charge them for a meal.”
All of Hill’s schools are on CEP and she says participation has already increased under the program. The kids aren’t the only ones liking the free-meals initiative. “The most lovely thing about CEP is the fact that we do not have to process applications,” Hill says. “You talk about a headache in a child nutrition program, it’s processing applications. CEP has taken that totally out of the picture. We can just feed children and do our part in preparing them for the educational process. It’s probably the highlight of my 32 years.”

Even with all the programs Hill offers at her schools, she knows she needs to do more than just feed students. She wants to be part of the educational process.

"We are a piece of the pie"

“We try to let [students, families and district staff] know that we’re there and doing more than just serving school lunch every day. If the school is doing something my staff is right there with them,” she says. “I believe in the wholeness of it. I always tell [my staff] we are a piece of the pie, and they shouldn’t forget that piece of the pie.

“I traveled when I was the president of the School Nutrition Association [in 2007-2008],” she continues. “I saw sometimes we were taken for granted. I try to reel [district administrators] back in and tell them we’re still here. They respect us in our district, but it’s the work we’ve done over the years. It didn’t start yesterday.”

One of the ways she’s done that is by getting her department out front and center in the community with the annual Wellness Walk, a 5K event held during National School Lunch Week at one of the district’s tracks. Students, staff and community members are invited to participate for free, and vendors like the American Heart Association set up tables offering information and providing health screenings.

“Everybody thinks that obesity is [schools meals’] fault,” Hill says. “With our state having the numbers that they do [in obesity], we just tried to do some things. The Wellness Walk has been our part to show that physical fitness and good nutrition go hand in hand.”

Hill has also done much to improve the physical environment of her kitchens. She applied for a grant and received money to add combi ovens to nearly half of her schools, allowing them to do different, healthier cooking preparations. She also received $1 million to replace old, outdated large pieces of equipment. With funding from yet another grant, Hill is redoing serving lines in schools as well.

“I’ll apply for a grant in a minute,” Hill says, adding that yet another grant enabled her to increase the number of sites offering breakfast in the classroom from three to 20.

Hill has also worked on several large-scale projects over the years, including designing the kitchens for five new schools that were built with a $150 million bond. “That’s one thing that people think, that  we just plan menus. But there is just so much that comes with the job,” she says.