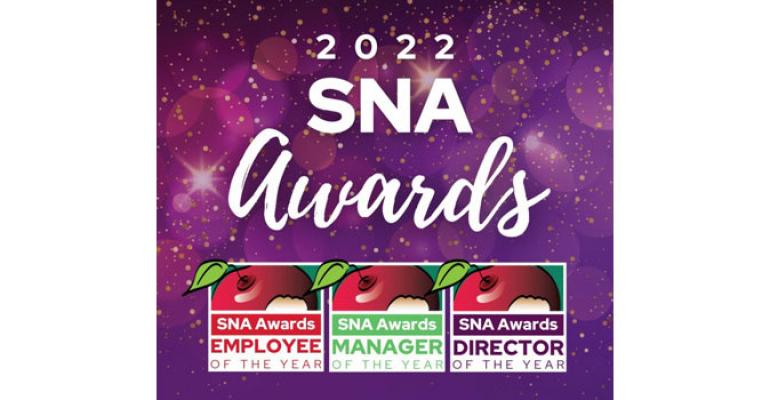 The awards program received nominations for school nutrition employees, managers and directors at the state level, and those winners were considered for awards within seven regions across the country.
News & Trends>K-12 Schools

In celebration of School Lunch Hero Day (SLHD) on May 6, the School Nutrition Association (SNA) has announced the winners of annual awards designed to recognize the efforts of school nutrition professionals to ensure that all students have access to healthy meals.

“Supply chain issues and staffing shortages have presented persistent challenges for school nutrition professionals, but it does not stop them from having a positive impact on their students and ensuring all who go through their cafeteria lines get a nutritious meal,” comments SNA President Beth Wallace, MBA, SNS. “The dedication shown by these school lunch heroes during the last two years of the pandemic has been astounding and inspiring.”

This year marks the 10th anniversary of SLHD, and SNA has teamed up with Jarrett J. Krosoczka, author and illustrator of the popular LUNCH LADY graphic novel series, and Random House Children’s Books, to celebrate school nutrition professionals with the return of the Lunch Lady graphic novels, which are being re-released in new, full-color editions along with full-cast audio books featuring Kate Flannery from The Office.

The awards program received nominations for school nutrition employees, managers and directors at the state level, and those winners were considered for awards within seven regions across the country. Of those regional winners, Rolfe, Owensby and Sheley were chosen for the national awards for their achievements in child nutrition.

By teaming up with a local organization, he encouraged composting at six of the district’s elementary schools. The district works with the Fresh Fruit and Vegetable Program and when the budget allows, Rolfe encourages an introduction of unconventional fruits and vegetables to the elementary students.

Owensby stepped up when the COVID pandemic closed schools, as she and the team worked hard to ensure all the children in the community were fed by setting up the high school for curbside operations. She created flyers to hand out with meals, encouraging parents to share information on the COVID meal service with other families. Her efforts during this time were recently acknowledged with the Character Award of Perseverance at the Mayor’s Breakfast in Lee’s Summit. Before serving as the district’s catering manager, Owensby held multiple positions during her 13-year career with the district.

Owensby also seek student input on menu items and tries to incorporate foods they request, such as adding vegetable cups, bento boxes, hummus and most recently, a coffee bar in the school.

Sheley has been described as creative, always smiling and a good mentor.  She has been instrumental in designing the school’s premium Grab-n-Go Salads. Offering everything from Chicken Bacon Ranch salad to Cranberry Walnut Blue Cheese salad, she’s raised the bar on typical school cafeteria menus while the salad bar she designed for the high school rivals any restaurant in the area. Parents frequently tell school employees how much their students love it.

Employee of the Year:

Manager of the Year:

Director of the Year: