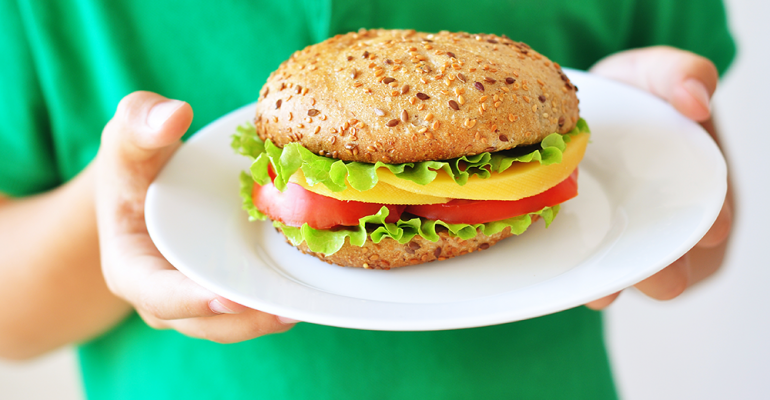 School districts across the nation are seeing great success in meeting newly modified federal whole-grain requirements, but not so much with dealing with unpaid meal debts, which plague three of every four districts responding to a School Nutrition Association (SNA) survey on which the group’s 2019 School Nutrition Trends Report is based.

First the good news—whole grains will remain a staple on school lunch trays across the country this fall, the report suggests, as more than 90% of responding districts expect to exceed the updated whole-grain regulations for school meals in the coming year. The revision, which took effect this summer with the support of SNA, requires that at least half of all grains offered must be whole-grain rich, and as more than 70% of the districts surveyed reported that about three-quarters or more of the grains they offer will be whole-grain rich, it is a standard that should meet overwhelming compliance.

On a more depressing note, the survey also found a large and apparently growing problem with unpaid school meal debt, as 75% of responding districts reported having such debt at the end of the 2017-18 school year. The 570 districts that reported the amount of their unpaid meal debt had a total accumulated debt of nearly $11 million, though individual amounts varied widely, from a miniscule $10 to a staggering $500,000.

And the problem seems to be getting worse as the amount of unpaid student meal debt reported by districts has increased substantially, with the median debt amount on annual SNA surveys ballooning by 70% since the 2012-13 school year.

SNA advocated for the change to the previous mandate that all grains must be whole-grain rich after it found that many schools encountered strong regional and cultural preferences for a few specific items such as white rice, tortillas or bagels that didn’t meet the standard. In fact, SNA found that over 80% of districts identified at least one barrier to increasing whole-grain options, with student acceptance ranking as the top challenge.

On the other hand, nearly 90% of districts now say they are working to increase student acceptance of whole grains through tactics such as taste tests and the use of white wheat for a lighter, softer texture.

Among other findings, the Trends Report revealed that school meal programs are utilizing popular restaurant trends in the cafeteria, with nearly 85% of districts now offering customizable menu options such as made-to-order salads, Asian entrée bars, build-your-own açaí bowls and flavor stations that allow students to add a variety of low- or no-sodium seasonings or sauces to their meals.

School nutrition professionals are also keeping up with clean-label trends by serving meals with fewer ingredients and additives. Last school year, about half of districts served cleaner label menu options such as chicken raised without antibiotics, sausage without nitrates and foods with fewer artificial colors and preservatives. Nearly all (91%) of these districts are either considering or planning to expand clean-label choices in the new school year. Among districts that did not offer cleaner label options last school year, 45% are either considering or planning to do so this year.

SNA’s 2019 School Nutrition Trends Report is based on survey responses from 812 school districts nationwide. The survey was distributed in May-June 2019.