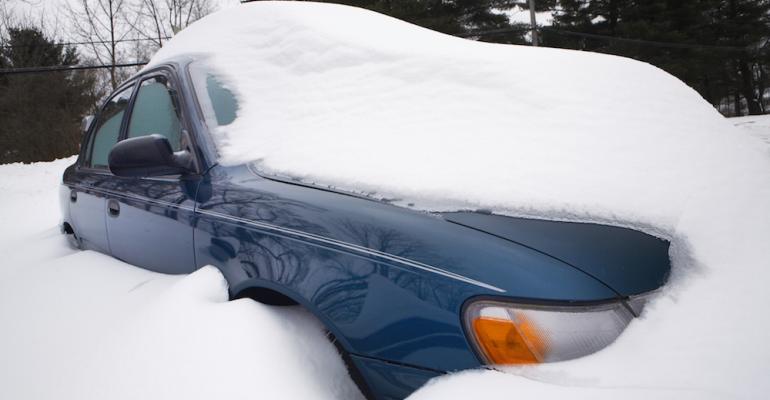 <p>After a massive snow storm, Harrison Schools created a program to deliver meals to students when schools are closed due to inclement weather.</p>
News & Trends>K-12 Schools

One district is getting meals to hungry kids—even when inclement weather closes schools.

For most kids, a snow day is a special occasion met with major excitement. But if you rely on school for your meals, getting the day off is hardly worth celebrating. So when Winter Storm Jonas shut down schools in Harrison County, W.Va., for four days, community members started worrying about how the closures might be impacting some of the students of low-income families.
“We know that there are a number of students that depend on school meals for their nutrition,” says Harrison Schools Food Service Supervisor David Seay. Many of the local churches in Harrison County also run backpack programs that deliver bagged meals to schools for students to take home for the weekend. But with Jonas dumping more than three feet of snow throughout most of West Virginia, area schools were closed on Thursday and Friday, and again the following Monday and Tuesday. “So these kids missed out for almost a week. I’m sure they ate, but it probably wasn’t good nutrition,” Seay says.
Henry Frazier, a father of three kids who attend one of Harrison County’s elementary schools, began posting on Facebook about whether anything could be done. And within a matter of weeks, Frazier and a group of backpack program volunteers were approaching county superintendent Dr. Mark Manchin. The solution they came up with: Student Nutrition on Wheels (or SNOW, for short), a program designed to give students easy access to healthy meals on days when school is forced to close because of inclement weather.
Since Harrison Schools runs several summer feeding sites for students through the USDA, the infrastructure was already in place to provide meals for children during the winter months. “Our state department said we could do the summer program in the winter. The winter program could piggyback off of the summer one,” Seay says. “We felt it all fell into place.”
Seay and his team started with a pilot program available to students at two of the district’s elementary schools, and eventually plan to take the program county-wide. For the summer programs, any student in the county who wants a meal can show up and get one. But for now, Seay is asking families to enroll in the winter program, which will make it easier to estimate how many meals will need to be prepared. “We didn’t want to over- or under-prepare,” he says. Right now, 125 students are enrolled.
School cooks prepare the bagged meals at one of the local elementary schools. “We posted a couple jobs for cooks and they applied for it. They don’t get paid for snow days, so this is extra duty pay for them,” says Seay. Breakfast is fresh fruit, milk or yogurt, and granola bars or cereal; lunch is ham, turkey, or sunflower seed butter sandwiches (peanut butter isn’t allowed because of allergies), hummus and tortilla chips, and more fresh fruit. “We’re not going to cook, per say. We’ll use packaged materials to come up with a reimbursable meal,” he says. (As with their summer program, the USDA reimburses the district on a per-meal basis.)
The meals are then delivered by church volunteers to pick-up locations that are easy for children and families to access during bad weather. “At one of the schools, there’s a large public housing district, and they’ve got a community center there. We’ve also picked out several churches,” Seay says. “It’s a small area that they’re covering, and the places are close enough that the kids can walk to them.”
It all sounds perfect, except for one thing: Since Jonas wreaked its wintry havoc, the unusually warm weather means that snow has been in short supply. Though the district did have one snow day shortly after the epic blizzard, it wasn’t quite ready to launch the program at that point. So for the time being, they’re still waiting to test it out.
“We’re excited about the program, and we hope to give it a try,” Seay says. “We have cooks standing by, equipment, and church folks ready to deliver. But no snow.”