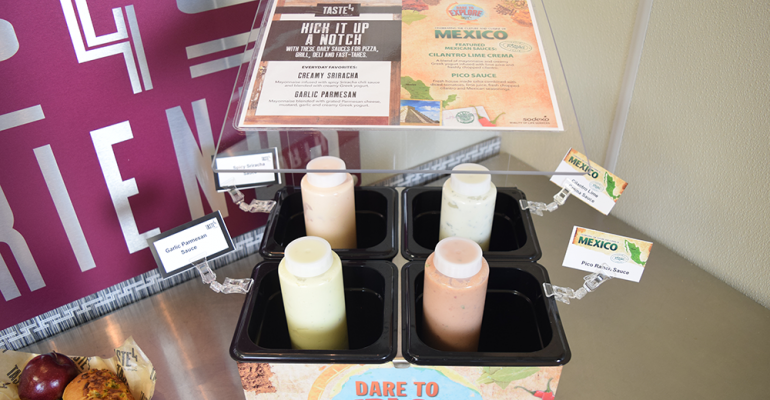 Sodexo North America
As an extra customization touch, Taste4 offers a range of specially designed spices and sauces called Dare to Explore that are matched to the cuisine being featured that day, which students can use to flavor their selections to their individual preferences.
News & Trends>K-12 Schools

Sodexo is in the process of rolling out a new meal approach targeted specifically at high schools that utilizes lessons learned from extensive research into GenZ taste and retail dining preferences. Called Taste4, it incorporates GenZ’s school lunch preferences for fresh food, flavorful options and spending time with friends in a fun environment.

In fact, teen consumers were engaged in every phase of the development of Taste4, from its name to the imagery and the menus, which were then adapted by Sodexo chefs into USDA-compliant offerings that include world flavors, spicy comfort foods and unique, fun food combinations with a heavy accent on customization.

“It’s a reinvention of high school dining,” explains Michael Morris, Sodexo’s national chef for K-12 schools. “It started out with focus groups with high school students in 35 districts over 19 states, looking to find out what this generation wants in their foodservice program, and they came back with four words that kept repeating: ‘fun, fresh, friends and flavor.’”

The program is designed to provide much greater day-to-day and week-to-week variety than the typical high school menu through a pair of branded platforms.

One is Sodexo’s Global World of Flavors concept, which brings a rotation of internationally inspired dishes to each of the existing stations in a high school cafeteria, so that there is always something new and exciting on the menu.

The other is Adventure, a new pop-up station that offers a weekly rotation of a dozen branded concepts developed by Sodexo to provide a street-style, retail experience through which students get to try a new concept each week for three months.

Among the brands being rotated through Adventure are Beale Street BBQ, Overslept, Sub Culture, Country Comfort, TaterTemptations, Chopsticks, Glorious Grilled Cheese, Canal Street Mac Attack, Fiesta, Strutters, Sunset Strips and Favorites. Artwork reflecting the diversity of the flavors and freshness of the food helps tell the culinary story of each meal and branding is customized by each location to celebrate its school spirit.

Once the initial rotation has run its course, each location can adapt the next Adventure station cycle to emphasize those concepts that proved most appealing to its particular customer base. That helps reduce the menu fatigue that often plagues school dining programs as the year wears on.

“When we pair those [Adventure station concepts] together with the World of Flavors, we can show our customers that when you come in on the first day of school to when you leave on the last day of school, you’re going to have a different, consistently positive retail branded customer experience,” Morris emphasizes.

Taste4 is being implemented through a staged rollout beginning this fall across the Sodexo K-12 network, with the initial phase covering 97 of the more than 400 districts in which the company operates.

“It’s a staged rollout because that way we can support the brand and execute it in a way where we can be sure we’re delivering on customer expectations,” Morris explains. Equipment modifications or additions are minimal as the program was designed specifically to utilize standard high school cafeteria infrastructure.

Taste4 was initially piloted in East Aurora High School in Illinois last September and extended with modifications based on that experience to Putnam City Schools in Oklahoma a few months later. Nine other schools subsequently joined the pilot program before the end of the 2017-2018 school year to give Sodexo a solid trial base on which to structure the systemwide rollout this fall.

The pilot experience was certainly encouraging as the Taste4 pilot schools increased the number of lunch meals sold even while overcoming challenges of decreased enrollment and staffing shortages. For example, in the program launch at Putnam City North High School in Oklahoma City, an additional 570 students ate lunch each month.