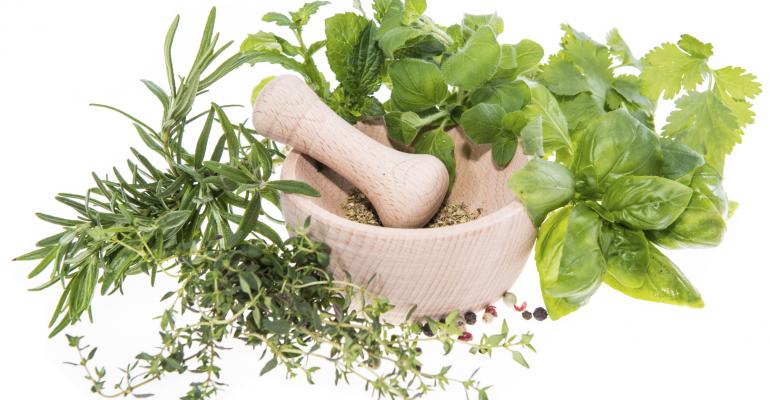 The students at McCracken County High School, in Kentucky, got a lesson in natural food flavoring during a special lunch on May 6 when bowls of herbs grown by the school’s agriculture students and prepared by its culinary students were used to flavor the day’s menu items.

The herbs were grown in the two greenhouses operated by ag students on the school grounds.

The event was designed as a way to introduce students to flavoring alternatives that don’t add sodium to dishes, says Sara Hedges, food service director for McCracken County Schools.

“The two big restrictions we were hit with this year was the whole grain [requirement] and the sodium restriction,” she explains. “At the high school we were hearing a lot of complaints about, ‘Where’s the salt?’ and they were bringing salt from home. It was just kind of out of control. So we asked ourselves, ‘How can we be more proactive about this and even get some education in there about the downsides of using too much sodium?’”

Hedges already had a relationship with the ag department, purchasing from it a limited quantity of items like lettuce, cucumbers, tomatoes and squash for use in the school meal program. “So I talked to them about maybe growing some herbs to use in foodservice to spice our food.”

Hedges provided a list of the herbs she would like. She concentrated on a core five—oregano, basil, cilantro, parsley and rosemary—that students wouldn’t have a hard time finding if they wanted to continue to use them at home.

Once enough of the crop matured this spring, Hedges worked with the school’s culinary department to teach a class on herbs. “I talked about cooking with herbs, why herbs are a good alternative to salt and also some of the medicinal purposes herbs can have,” Hedges says.

On the following day, she conducted a lab in which students cooked with herbs to learn how they complement and highlight different foods.

On that second day, she also had the culinary students chop up the herbs from the school greenhouses. They were then placed in bowls that were displayed on unused salad bar unit in the school cafeteria.

The culinary classes also made posters highlighting each of the herbs being displayed, including what foods it complements, its medicinal properties and how it’s grown. These were displayed in the cafeteria.

On the day the herb bar was deployed, the kitchen developed a menu that would particularly invite flavoring with the different herbs, such as baked ziti, pizza and baked potatoes. During service, the kitchen staff made recommendations on which herbs went with which dishes and they portioned out the requested herbs to avoid waste and general messiness.

“It was a really good turnout and I think the reason for that was because the kids did it, from growing it to preparing it,” Hedges says. The culinary students were also effective promoters, telling peers about the dishes they prepared in class using the herbs.

“They were also generally impressed and surprised at how the herbs can change a relatively bland food like a potato or chicken,” she notes. The classes made three different chicken dishes using three different herb combinations. They even made lavender ice cream! “That was outside a lot of their boxes,” Hedges laughs. “They were really blown away by that!”

Hedges says the herb bar event will be repeated next school year on days when the menu lends itself to it.

Meanwhile, the greenhouses should continue to produce a healthy volume of herbs up until the deepest winter months. The next step is learning how to dry them properly so they could be preserved for later use.

“That way the culinary class could dry them and the foodservice department can store them and use them in the cold months,” Hedges says.