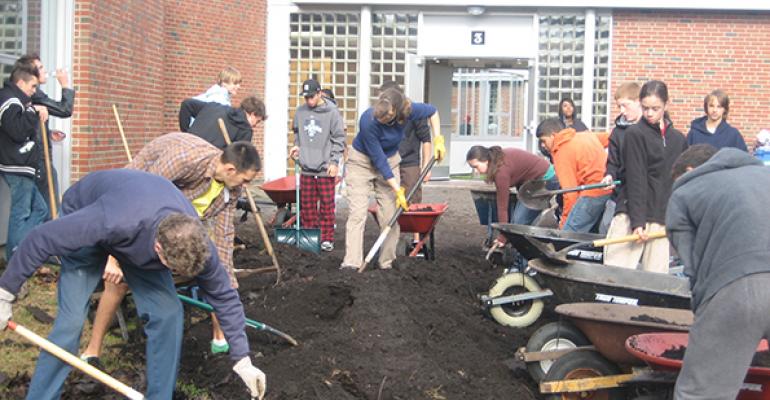 <p>The garden is also a learning laboratory for students, who do the vast majority of the planting and maintenance work.</p>
News & Trends>K-12 Schools

A student-maintained garden is a high school learning lab and a source for garden-grown produce in the lunchroom.

When Brendan Ryan moved into his office at Framingham High School nine years ago, the courtyard outside his window was “a field of dead grass.”

Today, it’s a school garden designed for student involvement. Ryan, the foodservice administrator for Framingham Public Schools in Massachusetts, installed the garden in 2010. It’s a lush lawn with beds placed at wide enough intervals that a whole class can gather for instruction.

But students do more than visit with their classrooms. Ryan is the only adult involved in the planting, maintenance and harvest of the two-acre patch. Students weed, amend soil, harvest crops and learn about concepts such as crop rotation and seed propagation.

This is all by design—Ryan created the garden because he wants to educate kids.

“Especially in metropolitan areas, we’re not an ag-based culture,” Ryan says. “I think the biggest thing is helping kids understand that things grow up out of the ground and that’s where you get your food.”

Ryan is a graduate of The Culinary Institute of America and a former executive chef at Harvard University who also has hands-on experience with various farming operations. A year before the garden installation, he secured a grant to re-install dish machines through the Massachusetts Department of Environmental Protection to support the launch of a composting program in partnership with the town of Framingham, a move that also removed more than 350,000 foam trays from the trash stream.

To dig out the garden beds, Ryan arranged a partnership with the Regional Employment Board, an organization that provides summer jobs for youth in the community. Ryan continues to host youth through the program to secure summer labor.

Startup costs included soil testing and the purchase of seed. Ongoing costs are also manageable. The department spends about 300 dollars annually on seed. Compost is free. Labor is provided by students. Since all the products from the garden are for foodservice use, operational costs are covered by the department budget.

Ryan and the students discovered that a garden enclosed in the courtyard has advantages. Though birds can get to the crops—one year they decimated the cantaloupes—there are few pest problems.

But heavy work requires an organized effort. Ryan hosts a yearly garden participation day that has attracted up to 200 students who show up to wheel 40 yards of compost through the school hallways into the courtyard. The event requires collaboration with the building and maintenance crews and targeted student recruitment. To encourage participation, Ryan cooks the students a big breakfast.

The effort pays off. Ryan says students feel a sense of ownership: “It’s become a part of the entire high school environment.”

The garden produces thousands of pounds of produce every year, all grown without pesticides or commercial-grade fertilizers. All of it is used to feed the district’s 9,000 students. The district serves more than a million meals per year.

Students return in the fall to a riot of tomatoes, eggplant, winter squash, garlic and more, including a heritage variety of watermelon suited to the cool, short growing season of the Northeast. Ryan looks for produce that “has the biggest impact, serves the most and stores the best.”

Ryan serves garden produce throughout the school year. The foodservice staff roasts and freezes more than 1,000 gallons of Marzano plum tomatoes that are used to boost the flavor of tomato sauce. They make 200 gallons of pickles from cucumbers and garlic. Roasted jalapeno and habanero peppers are added to taco meat. Ryan makes basil into pesto all summer and serves it on pizza and pasta. The garden produces enough Brussels sprouts—800 to 1,000 pounds—for two meals in the fall, after a few frosts have sweetened them up.

Ed Gotgart, chief operating officer for Framingham Public Schools, says Ryan’s knowledge of the systems behind food production and preparation makes a significant financial difference to the district. Over the past eight years, the department has received more than 200,000 dollars in state and federal grants for projects and program expansion.

“When Brendan arrived, the program was barely self-sufficient,” Gotgart says. “Now it not only supports itself but actually contributes back to the district through capital improvements. He does it all himself.”

The program is fulfilling Ryan’s vision for students: A handful have gone on to pursue careers in foodservice.

The garden reaches beyond itself, Ryan says, with “little tentacles that go out into the community doing various things that have a positive impact. We’re creating a legacy.”