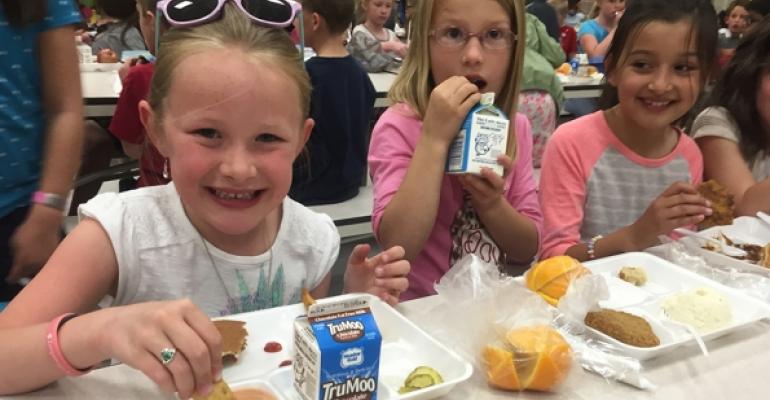 While ketchup is a great—albeit traditional—dunking option for fries, it doesn’t cut it for students in Utah’s Alpine School District. Here, a smooth combination of mayonnaise and ketchup with a touch of vinegar, is the condiment of choice for fry dipping.

But when individual cups of this condiment dubbed “fry sauce” became too pricey, the cult favorite was removed from lunch menus districtwide.

Longing to bring back its tangy taste to pair with the district’s baked potato wedges and baked twister fries, a group of students at Harvest Elementary School in Saratoga Springs lobbied the school’s principal.

“The kids were great, they really made a solid proposal,” says Principal Charles Stewart. “They feel comfortable because Ms. Burns, the student council lead, truly values their ideas and opinions.”

The students claimed that fry sauce would help increase participation in the school lunch program on the days it was served. They presented their idea to Linda Ward, nutrition services director, who then worked with the district’s kitchen team to come up with a recipe and start collecting data.

Turns out, the student council was right. On the days fry sauce was served, participation increased between 3 and 5 percent. As a result, it’s now available three times a week in secondary schools and once a week in elementary schools.

“To reduce the cost, we make the sauce ourselves,” says Ward, who has been with the district for 33 years, serving as nutrition services director for the past three. “We named it Harvest Fry Sauce to recognize the students at the school who lobbied to bring it back to our menus.”

“Overall, participation is up both because of fry sauce as well as other new menu items that we’ve introduced,” says Ward, noting that the sauce fits within the federal fat and sodium limits.

Other new menu items include an egg and cheese wrap for breakfast, an Alpine chicken bowl, chicken drumsticks served with potatoes and gravy, French toast and hash browns for lunch, beef and broccoli over rice and a spicy chicken sandwich.

“The students are excited about all the changes—but especially to have the fry sauce back,” says Ward. “They’re also empowered knowing they can enact change and that we’re listening to them.”