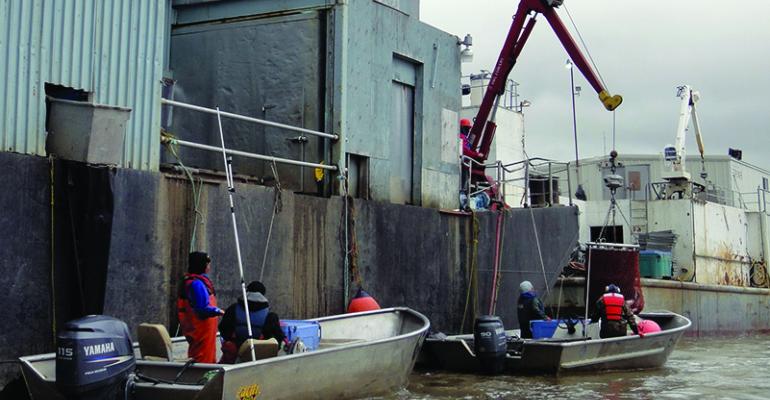 Alaska is known worldwide for it’s tasty, omega 3-rich wild salmon. And yet, many children who live in the state are eating less of it than ever.

That’s what the University of Alaska Fairbanks Associate Professor of Nutrition Andrea Bersamin, Ph.D., found while studying health and nutrition disparities in indigenous communities like the Yupik, who live in Alaska’s Yukon-Kuskokwim Delta. “The traditional food system has been degrading over time. Kids are eating a lot fewer traditional foods than adults,” she says.

But a time-honored diet of local fish, marine mammals, moose, and wild grains and berries is worlds healthier than one consisting mostly of packaged, processed fare. Not to mention more reliable. Thanks to its climate and remote location, it’s not always easy to bring food into Alaska—and the state struggles with food insecurity. Even Fairbanks, the second largest city in the state, only has three days’ worth of foodstuffs on hand.

So Bersamin sought to find a way to encourage young Alaskans to eat more like their parents, grandparents and ancestors. “One of the questions we were interested in is, is part of the reason they’re eating so few traditional foods because they spend so much time in school? Does that set dietary patterns for life?” Bersamin says. “We wanted to position kids to be in the best spot to secure their own food security.”

The result was Fish to School, a pilot program aimed at teaching students in the Yukon-Kuskokwim Delta about the benefits of eating traditional foods. Specifically, salmon—as it’s one of the only foods in the traditional Alaskan diet that’s commercially available. Using funds from a USDA research grant, Bersamin purchased salmon from a local processor, which processes and sells fish caught by community members. Then she worked with foodservice staff (most of whom are also Yupik) to develop traditional-style dishes, like salmon soup or baked salmon. During the 2013-2014 school year, the dishes were served for lunch once a week.

While any seafood aside from fish sticks tends to be a tough sell for most schoolchildren, that wasn’t the case with the Yupik students. Even with their penchant for packaged snacks, “these are kids who have grown up around salmon, so we didn’t encounter any taste challenges,” Bersamin says. In fact, when Bersamin conducted a plate-waste study by taking photos of student lunch trays, she found that virtually 100 percent of the salmon was eaten.

In addition to serving salmon-centric meals, Bersamin created lesson plans designed to teach students about how what they eat affects their health, the local economy and the environment. One lesson, for instance, helped students learn the difference between fish caught by local community members, commercially caught fish and processed fish. “A lot of the program components were based on Yupik values and how they perceive salmon to promote wellness in their community,” Bersamin says.

Fish to School, by all accounts, was a major success. When Bersamin measured how closely the students’ diets met national healthy eating guidelines both before and during the program, she found that the weekly salmon meals seemed to improve students’ diet quality overall. The program also seemed to improve students’ attitudes and beliefs about traditional Alaskan foods. (The findings, however, are preliminary because they haven’t yet been reviewed by the local tribal organization.)

As for what’s next? Since the program was only conducted in one school, Bersamin wants to see whether a similar initiative could work in larger communities and urban areas that are home to both native and non-native populations. But that will require more funding—which could hard to come by. A separate, state-run pilot program designed to bring more local foods to Alaska’s school cafeteria menus, called Nutritional Alaska Foods to Schools (NAFS), was recently eliminated due to budget cuts. And though Bersamin’s program was funded with federal dollars, the state’s shrinking budget isn’t a great sign for the future. “We want to see this program sustained beyond the duration of the [USDA] grant, and that’s less viable given that this program was scrapped,” she says. “Fish is pretty expensive, and it’s unclear whether the schools will be able to afford it.”