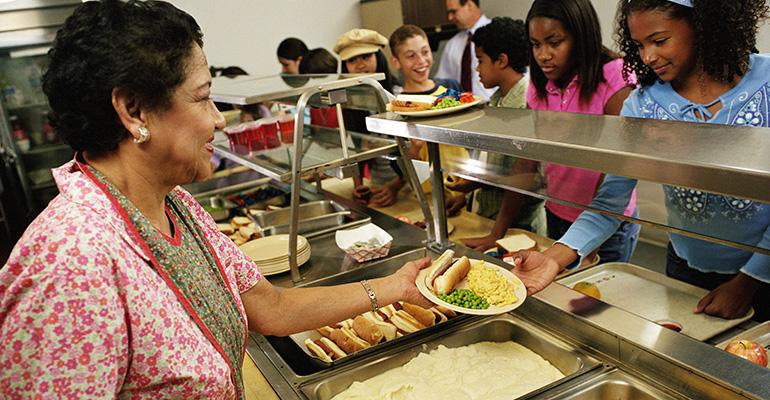 Yellow Dog Productions / The Image Bank
Since healthier nutrition standards for school meals rolled out in the 2012-2013 school year, there’s been a significant decrease in the risk for obesity among children living in poverty.
News & Trends>K-12 Schools

Did the Healthy, Hunger-Free Kids Act (HHFKA) actually work? New research published today in Health Affairs says yes. The authors of the study found that since healthier nutrition standards for school meals rolled out in the 2012-2013 school year, there’s been a significant decrease in the risk for obesity among children living in poverty. That means over 500,000 fewer cases of obesity among these children, the ones who participate most in school meals.

The authors say this is the first study to directly measure the impact of the nutrition standards, which were the first update to those standards in 15 years. To conduct the study, lead study author Erica Kenney, assistant professor of public health nutrition at the Harvard T.H. Chan School of Public Health, and her colleagues used obesity prevalence data for children ages 10-17 from the National Survey of Children’s Health.

They examined trends in obesity prior to the implementation of HHFKA and took into account any state policies to address foods in schools. By 2018, the prevalence of obesity among such children was 47% lower than would have been expected had the new standards not been put into place.

While the results showed no impact of the HHFKA on obesity among students as a whole, an important distinction is found among children growing up in poverty: The predicted percentage of children with obesity in 2018 was 21% with the HHFKA but would have been expected to be 31% without it.

“Students growing up in families with low incomes participate the most in school meals, so it stands to reason that they would benefit the most,” Kenney says. “These students are also at higher risk for obesity, food insecurity and poor health. Our study shows that the healthier nutrition standards are working as intended for these students.”

The HHFKA was passed by Congress in 2010, laying the groundwork for healthier school meals standards, set by the USDA, and also put into motion the first ever set of nutrition standards for school vending machines and a la carte lines, which went into effect in 2014-2015.

The USDA has since made moves to loosen the standards introduced by the HHFKA.

A reintroduction of low-fat flavored milk, less-strict whole-grains requirements and delayed limits on sodium were all part of a rule change in 2018. In January of this year, the USDA proposed a rule that would allow schools to serve less fruit, fewer whole grains, fewer varieties of vegetables and more starchy vegetables.

“Healthier school meals have been an unqualified success,” says Jamie Bussel, MPH, senior program officer at the Robert Wood Johnson Foundation (RWJF), who directs its work to prevent and reduce childhood obesity. RWJF funded the issue of Health Affairs in which the article appears and supported some of the research that went into the study.

Bussel proposes that the USDA steps up during the pandemic. “To provide some certainty during the ongoing pandemic, USDA should allow schools to serve free meals to every student during the coming school year—universal free school meals—and Congress should appropriate any necessary additional funding to cover the full cost of all meals served.”