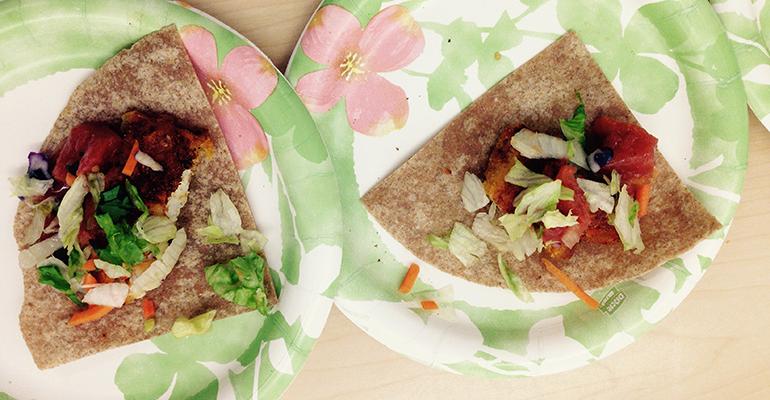 <p>Following the results of the study, Massachusetts started the first state-funded chefs in schools program. These fish tacos were one of the items created through the program.</p>
News & Trends>K-12 Schools

As a result of the study, Massachusetts passed a grant that will connect professional chefs with more than 20,000 students this year alone.

As we continue to turn chefs into stars, there is one demographic that is particularly influenced by culinary professionals—kids in grades three through eight.

A 2015 study led by researchers from the Harvard T.H. Chan School of Public Health sought to evaluate the short- and long-term effects of chef-enhanced meals as well as extended exposure to choice architecture on healthier school food selection and consumption. The researchers conducted a school-based randomized clinical trial during the 2011-2012 school year among 14 elementary and middle schools in two urban, low-income school districts in Massachusetts. Included in the study were 2,638 students in grades three through eight.

“We evaluated four different conditions,” says Juliana Cohen, nutritionist at Harvard University and lead author on the study, which was published in JAMA Pediatrics in 2015. “The first was a test group. The second group worked with a professional chef who provided weekly training, taste testing and recipe design to the schools. The third was a group where we redesigned the layout of the cafeteria to encourage healthful selections—in other words creating a ‘smart café.’ The fourth was a combination between having a chef and employing smart café techniques.”

As it turns out, the small redesign strategies made little difference, while time had a bigger impact.

“Once the students acclimated to the chef and the new foods they were being offered, consumption increased substantially,” says Cohen, who also notes that less was thrown away. “Consumption in the smart cafés never changed much. And there were no additional benefits when we combined the chef with smart café techniques.”

Cohen says that efforts to improve the taste of school foods through chef-enhanced meals should remain a priority for schools because this was the only method that also increased consumption.

“This was observed only after students were repeatedly exposed to the new foods for seven months,” she says. “Therefore, schools should not abandon healthier options if they are initially met with resistance.”

“In one school, the chef was able to reteach the staff how to cut carrots differently and save them over $1,000 by reducing waste,” Cohen says. “Inventory was better controlled and efficiencies were vastly improved across all the chef schools. Staff morale was also improved as the chef was able to teach new culinary and life skills.”

The study led to a happy ending for a handful of schools in Massachusetts, too.

“The success of the study lead to a new program funded by that state that connects chefs to schools,” Cohen says.

“The Chefs in School (CIS) program is the first state-funded program of its kind in the nation,” says Emily Abbott, communications manager with Project Bread, which co-funded Cohen’s study.

Cohen says CIS is just the start for how the study’s findings might be applied to school foodservice programs in the future. “The role of the chef carries a lot of power both for the kids and for the staff in a school,” she says, adding that schools that can’t afford a full-time chef might benefit from chef shares with other schools. “When you bring in a chef who can introduce familiar foods with a healthier twist, you can better determine what will work and what won’t work in your district. This can positively impact students’ health in important life-long ways.”