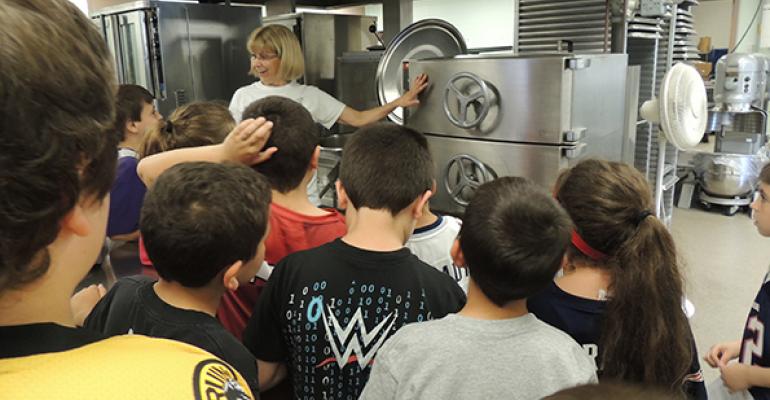 Taking students behind the line at Acushnet Elementary

When Shelley Mello, cook/manager at Acushnet (Mass.) Elementary School, discovered that the school’s fourth grade health curriculum focused on nutrition, she had an idea.

“As school foodservice professionals, we’re always harping on the kids to take their vegetables and fruit,” she says. “But I wanted them to understand why these foods are important. So when I learned about the health curriculum, I thought it might be good for the students to take a field trip to the cafeteria and see first hand how we prepare the food they eat and what effect the different food groups can have on their bodies and brains. I thought it would tie nicely into what they were learning into the classroom.”

She pitched the field trip idea to the teachers and the principal and got immediate buy-in. “They were thrilled with the idea,” says Mello, who has been at the school for over 14 years.

Once she had approval, she spent the next few weeks coming up with a lesson plan. She wanted to make sure the message focused on the power of food and nutrition but also underscored how the school cafeteria could help students learn to make more healthful choices now and in the future.

“Once the other grades caught wind that we were going to host these trips behind the line, they wanted to participate, too,” Mello says.

Ultimately, the first class of students she hosted was second grade, then fourth and then kindergarten. Each class had roughly 26 students, which made for a tight squeeze at times.

“The teachers came along and helped to keep everything organized and safe,” Mello says.

Students arrived at the café around 2 p.m. The last lunch at Acushnet is served at 1 p.m., so all of the equipment was cooled down and everything was put away by the time they arrived. From there, Mello lined them up along the lunch line and talked with them about the different food groups, what a healthy plate should look like and why eating is such an important part of long-term health.

“I used our menus as a teaching tool,” she says. “I asked the kids to find the protein, the dairy, the grains and the vegetable in each dish.”

The students caught on quickly and made a game of it, she reports. So much so, that for the balance of the year, students would identify to her the different items on their plates almost daily.

That theory spun off another idea for Mello. She created a wall-of-fame where she would post photos of students as they tried new foods. Kids were so eager to get on the wall that they were willing to try all sorts of new things they might not otherwise choose on their own.

“During the trips, we also talked about food safety,” Mello adds. “I showed them our sinks and told them why it’s important to wash their hands and their fruits and vegetables before they eat them. I made sure they knew that we have rules we have to follow to keep them safe just as they have rules they have to follow to keep each other safe, especially for classmates who have food allergies.”

The students also got to see the freezers, refrigerators, steamers and ovens up close.

“They loved having a chance to spin the big wheel on the steamers,” says Mello, who ended up touring 14 different groups of students through the café last year. “The biggest surprise to me was how these tours impacted participation. I think they gave students a chance to connect better with the cafeteria and with the people who work here. We humanized it for them.”

Mello plans to continue the tours for the upcoming school year.