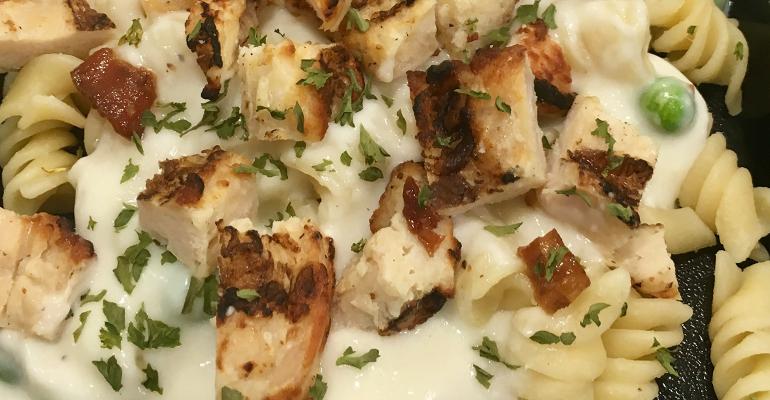 Photos: Charleston County School District
The popular bacon Alfredo is made with bacon bits left from breakfast that are rendered down and added to the Alfredo sauce and served with all-white-meat chicken breast.
News & Trends>K-12 Schools

The change is working as participation—particularly among paid students—has grown even as enrollment dropped.

Like many school districts, Charleston County School District in South Carolina has struggled with the challenge of offering school meals that students will want to eat but that meet the nutritional expectations of parents and regulators.

Over the summer the district’s nutrition services department tried a simple idea: Why not ask the kids what they would like by having them taste test various alternatives that meet federal nutrition requirements? It’s certainly better than guessing.

District nutrition department representatives went out to a pair of summer camp sites where they had students sample different versions of various foods ranging from honey mustard dip and marinara sauce to scrambled eggs and meatballs. Students sample proposed menu options during a taste test session this past summer.

“What we wanted to do was find what they really liked and how can we incorporate that within our guidelines and regulations,” offers Walter Campbell, director of nutrition services for the district. “Plus, we also realized that we need to listen to our customers more than we have in the past.”

The initiative actually started last spring when the department conducted its regular research into district preferences, but then took it another step.

But this time, he explains, that research was combined with input from district cafeteria managers to develop a list of a couple of dozen potential items that would then be taste tested over the summer with students. The recipes were developed by the managers to ensure they stayed within federal school meal guidelines.

The taste tests were conducted for three full weeks at two separate sites that were hosting summer camps, one an elementary school and one a middle/high school so that input could be garnered from a wide age range. About 50 youngsters were tested each day at each site over the three weeks, giving the team a substantial sample of student preferences.

“There were multiple items we ended up testing multiple times until we hit the right flavor profile,” Tunstill says. “If something didn’t test well, we just didn’t go with that product.”

“We always tested items, but never this extensively. Sometimes we’d roll items out and the tests would be done after we’d written the menu. Not always but a lot of times,” he concedes, “we put together what we thought kids would want [based on] feedback from managers. This time, just getting together with parents and kids before writing the menu was our biggest advantage.”

So far, the advantage has produced an overall school meal participation rise of some five percent, made even more impressive in that the nearly 50,000-student district saw a slight drop of 175 in its enrollment for 2017-2018. Contributing significantly to the positive result was a 16 percent increase in participation by cash students, generally the hardest to attract. Not counted in the participation numbers but significant nonetheless is a 50 percent increase in lunch purchases by teachers.

One drag on the meal participation numbers came as the result of breakfast counts dropping shortly after the new meal program was introduced. That came about because some of the district’s high-participation breakfast in the classroom (BIC) sites converted to the cafeteria breakfast program due to the appeal of the new offerings, which weren’t available as BIC options.

Eliminating BIC’s almost automatic near-universal participation counts reduced breakfast sales at these sites in the short term but the counts seem to be rebounding, Campbell says, with the most recent week’s figures showing a 5.2 percent jump, he notes.

What prompted some sites to convert from BIC to cafeteria sales was the introduction of a whole new approach to breakfast, prompted initially by continual parent and student requests for more homemade offerings like scrambled eggs, bacon, sausage and grits, Tunstill says. These were honed further in the summer taste testing program and what emerged was an everyday selection of four options, each fulfilling federal requirements for all components. They include…

• the Low Country Home-Made Breakfast: scrambled eggs with cheddar cheese and choice of biscuit or grits and of bacon or sausage, plus either a fruit or juice;
• Fresh Baked Biscuits, Bagels and More: a choice of a handmade chicken or sausage biscuit, blueberry pancakes, French toast sticks or the Kraft Bagel-ful product, plus either a fruit or juice;
• Rush Hour Quick Pick: pick any two of assorted cereals, muffins, Pop Tarts, breakfast bars, cheese sticks or yogurts, plus either a fruit of fruit juice;
• Pick One—You’re Done: housemade fruit parfaits that include yogurt, fruit and granola to fulfill the protein, fruit and grain requirements in one item.

These choices are available at all non-BIC sites across all grade levels. The popular new chicken Parmesan dish comes either over rotini or in a 5.5-inch hoagie roll. Note the different combination of fruits and veggies, which are selected by each student per their preferences from a new veggie/salad station.

Meanwhile, the lunch menu across the district now brims with multiple new options that were validated by the taste testing program. There is also new emphasis on higher quality ingredients and on presentation.

Popular new selections include a bacon Alfredo over rotini with all-white chicken breast meat; chicken Parmesan using a breaded, oven-baked chicken breast served with housemade marinara (the recipe a product of the taste-testing) over either rotini or in a hoagie roll topped with mozzarella; and a toasted ham and cheddar sandwich with homemade broccoli and cheese soup. There’s also a nacho bar in the cycle rotation where students can build their own plates with components like ground beef, warm tortilla chips, queso blanco, fiesta corn, housemade pico de gallo, lettuce, sour cream, black olives and jalapenos.

The vegetable component approach has been modified to introduce more choice. Previously at the elementary school sites, many entrees were served with a hot vegetable side and then the student had the fruit on the side in offer-vs.-serve format. But that led to a lot of hot vegetables in the trash can, Tunstill says.

“What we found with our testing was that they wanted fresh vegetables with dipping sauces,” he says. Now, all 48 elementary sites offer a station with fresh carrot and celery sticks, sliced cucumbers, broccoli florets and grape tomatoes, plus a choice of housemade ranch and honey mustard, hummus and pimento cheese dips, plus side salads.

“Those four dips tested really well and have been a real game changer on the vegetable consumption side,” Tunstill says. “Kids really seem to like the concept of picking their own veggies and dips.”

“We now use premium products like Hebrew National hot dogs and Hormel ham and cheese instead of brown box commodity items,” Pettit says. “These are brands people buy at the grocery store.”

Granted, they are pricier, but so far the district has been able to manage the increased costs, Campbell offers. “We know our food cost is going to go up but we believe our participation will also go up and that will cover it because our labor won’t go up at the same speed,” he notes.

It’s a more commercial mindset that also extends into other areas like the way the food is presented.

“While we have to go with the regs and the [required] components, there are still a lot of things we can do” to increase appeal, Pettit says. “When you look at the breakfast menu, for example, it looks more like the menu you’d see at a mom- and pop-style diner and the [serving] line looks more like what a restaurant looks like.”

For that reason, Pettit developed planograms over the summer for each of the planned menus, both for the serving line and for the trays so that they are both uniform across the district and attractive. Pictures of the assembled trays are also sent to parents to emphasize the quality and appeal of the food.

Another move was to switch out the larger serving trays for shop pans that are half the size on the serving line.

“With a four-well warmer, instead of four full pans we now can roll with eight shop pans and what that does is twofold,” Pettit explains. “It gives a better presentation to the customer and it also forces us to constantly change out the [item] to help maintain product quality.”

That quality is reflected in the kinds of items being menued, like a housemade quinoa salad with sliced tomatoes, cucumbers and red onions—a stealth item meant to get kids to try the rather exotic grain that is snuck on the menu to pair with a very popular chicken and waffles dish—to a tortellini salad made with fresh mozzarella, black olives and roasted red peppers.

“When have you ever seen roasted red peppers on a school lunch menu?” asks Pettit. “We’re really raising the bar.”