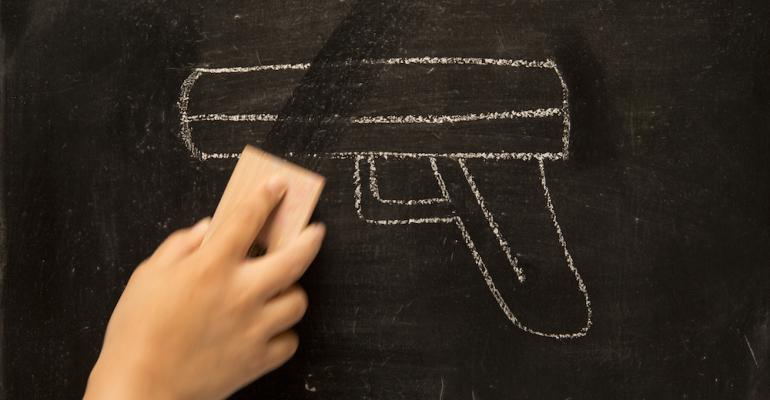 This training could save your life

Unfortunately, cafeterias are a target for school shootings. Are your employees prepared for an active shooter?

From knife skills to food safety and customer service, foodservice operators have a lot of training that needs to be done. But there’s one type of training that many aren’t doing that could just end up saving lives: active shooter training.

At Lakota Local School District in Ohio, Director of Child Nutrition and Wellness Chris Burkhardt has been providing active shooter training for his staff for years. Before joining Lakota, Burkhardt worked in the Cleveland Public School District where a shooter shot five people outside a school cafeteria in 2007.

“We don’t necessarily like to have this training, but the reality is [school shootings are] prevalent. It’s happening all too often,” Burkhardt says. Just a few weeks ago on Feb. 29, a shooter opened fire in another Ohio school cafeteria, injuring four.

Unfortunately, due to the nature of school cafeterias where large numbers of students congregate, these dining areas have become targets for school shooters. “You always think, ‘It’s never going to happen here,’” Burkhardt says. “I’m sure that’s what they thought in Columbine and in Sandy Hook. The reality is, it’s everywhere.”

To make sure his staff is prepared, Burkhardt brings in the local sheriff’s department to conduct ALICE (Alert, Lockdown, Inform, Counter, Evacuate) training. The district also provides similar training for all staff and students so that every person in a school knows what to do in case of a shooter on school grounds.

There are two professional development days for Lakota foodservice staff each year. Burkhardt used one of those days in January before school resumed from winter break to provide the ALICE training. The goal of the training is to ensure everyone knows what to do should a shooter enter the school and to prevent deaths. “We found that a lot of these mass shootings that are happening, some of the fatalities are preventable,” Burkhardt says.

For the first two hours of the training, the sheriff’s department goes over ALICE techniques. The training stresses two main points—get out of the situation if at all possible and if not, use active resistance against the shooter. Burkhardt says ALICE training changes old mindsets about what to do if a shooter comes into a school. “When I was in school, it was go over into the corner of a room or sit underneath your desk, which we found is not very effective,” he says. “With ALICE training we’re teaching, if you can get out of the building, get out of the building. Get out of the situation. If you are put in a situation where you can’t get out, what are the types of things that you do to improve your odds of survival?”

After the full-group training, each of the different school kitchen teams split up to discuss the particularities of their school site, what routes they would take if a shooter were to come into the school and what they would do if they were unable to get out of the kitchen.

“We know some folks are going to freeze,” Burkhardt says. “How do you help those co-workers to get them out of the situation or to barricade yourself in a freezer or storeroom? We talk through a lot of different scenarios in the calm.”

So what happens if a shooter were to come into a cafeteria during a lunch period? “Our staff was told, ‘If you can help the students, do it, but don’t be a hero.’ If you are in the back of the kitchen, your first reaction is to go help, but now what we want folks to do it to get out,” Burkhardt says. “Each student has been trained to do certain things in certain situations as well. Your intuitive reaction isn’t necessarily what we want folks to do. We want folks to get away from it.”

Other instinctual reactions the training hopes to end is meeting outside the school building (you’re still a target) and going to a nearby school (that school will be on lockdown).

In addition to all the what-if scenarios during the training, the sheriff’s department also shoots off live rounds of blank ammunition so staff knows what gunshots sound like in a school environment.

Burkhardt says the training does freak some people out, but people feel empowered so that if the situation were to occur, they are confident in the action to remain safe.