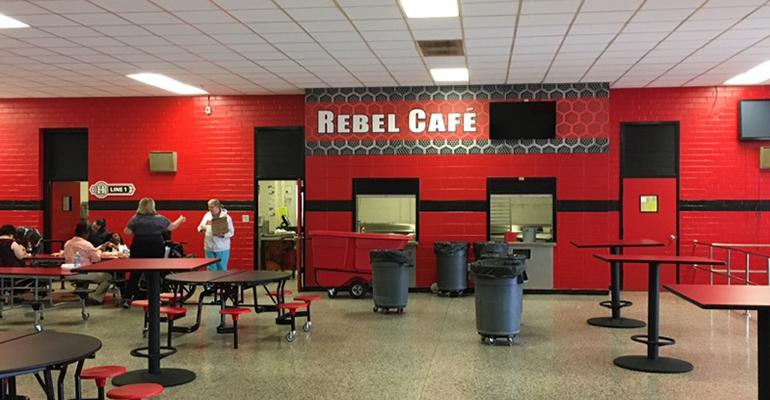 Focusing on several key areas that make up the school food experience, Richmond County School Nutrition Services (RCSNS) in Augusta, Ga., has recently made some changes for the better. With the help of Ingenious Culinary Concepts, a consulting firm that specializes in turning around school nutrition programs, new branding, training and decor have led to jumps in participation, and a stronger connection between staff, students and parents.

Because the district, which serves breakfast, lunch, after-school snacks and supper to 57 schools, has adopted districtwide CEP (community eligibility provision), funding is directly tied to participation, making this issue an important one to say the least.

In September of last year, Halls, who previously worked for several years in foodservice leadership positions at Orange County Public Schools in Orlando, checked out what was happening in cafeterias around the Richmond County district.

After “taking the temperature” of the facilities, Halls, Schlein and a taskforce of managers and other stakeholders from the district began work. Focus groups of students gathered to provide feedback. A vision board was made up of Post-it notes and high hopes.

The central vision and guiding principle was identified as “encompassing the role of food in education, impacting the students and helping them to do better in the classroom,” Schlein says.

Here’s how the group has addressed the key areas at three high schools so far, with plans for the entire district:

Atmosphere and branding: The vision of connecting food to education led to a new motto, “Fueled 4 Focus.” A new logo was created and work on cafeteria aesthetics began, including customized graphics. Accent walls were painted in bright colors over plain, washed-out walls that Schlein says were “institutional looking.”

To create a more welcoming setting for students, new seating was ordered and arranged, including booths, high-top tables and round seating tables. Stainless-steel serving lines were wrapped in vibrant, fresh veggie-themed graphics. BEFORE AND AFTER: Previously, colors were drab (above). Now, with bright colors and graphics, plus new seating (the high-top tables in the foreground), this Richmond County schools high school cafeteria has a new look that’s helped boost participation.

Old-fashioned sporks and white Styrofoam containers have been 86-ed in favor of black plasticware, sleek black serving bowls and trays and clear clamshell containers for specialty salads and wraps. Translucent cups with lids for to-go cups have replaced Styrofoam cups.

School nutrition employees have been wearing a version of hospital scrubs (again, contributing to the cold, institutional atmosphere). Starting in the 2018 school year, all 400 staff members will start wearing black chef coats with nametags and embroidered logos. The nametags will include the employees’ hometowns, a conversation starter that Halls learned during his time working at Walt Disney World earlier in his career.

Operations: One problem Halls identified right away was long lines.

“I’ve been doing this long enough that I see sometimes the reason participation may be low is because lines are kind of long,” Halls says.

The solution is mobile carts equipped with hot- and cold-serving capabilities and a laptop to log information. These carts can travel to different locations where students may be gathering—socializing before school in the gym, for example—but not eating. The carts will play a big part in increasing breakfast participation, especially, because it’s a time that many students don’t want to stand in a serving line before classes begin. At one location, the addition of a cart helped participation go up by 156 meals on the first day.

Customer service: “One key is that the team invested a lot of time up front with the training, starting with the way the staff greets the students,” Halls says. “Instead of, ‘Next’ or ‘Hurry up,’ it’s ‘See you tomorrow for breakfast’ or ‘Thank you for dining with us.’”

Looking to chain restaurants like Chick-fil-A that emphasize hospitality, the team created a set of cards for employees with dialog prompts that include words to trigger more interaction with students, such as “Well, hello everybody; it’s good to see you all,” “Are you enjoying your meal?” “We’re glad you joined us. What are you having today?” and “Enjoy the rest of your day! I’ll be looking for you tomorrow.”

“What a great way to bond and get to know our customers,” Schlein says. “The staff is working extra hard…going to classes, participating in mentoring and coaching. We’re just building leaders here now; we’re finding a lot of them have leadership potential.”

Group texts to students offer another way to connect. The district will send no more than eight texts a month to students who opt in to the program, and texts will alert them to fun specials, taste tests and surprises on tap for that day’s food.

The first day of the pilot texting program in three schools, 100 students opted in. Texting seems to be a great way to connect with students that encourages more feedback than, say, Facebook or even Instagram.

“Students shy away from Facebook because of the parental presence, and they may scroll through Twitter and scroll through Instagram, but do they really want to follow us or leave comments?” Schlein says. “We’ve found a different way to communicate with them to let them know what’s going on.”

Menu/food quality: Halls found that the food isn’t really the problem at the schools, with a solid menu that’s already been moving toward more scratch cooking and fresh produce. Taste tests of new items like Buffalo chicken pizza, iced cappuccino and Asian bento boxes have served to get students excited about the menu, though.

That excitement has carried over to parents, too. NIGHT AND DAY: This Richmond County schools high school cafeteria’s makeover has taken it from efficient-yet-institutional to cool hangout spot, something that makes students more likely to stop in and eat.

“At one of the schools, we did a grand reopening and 50 parents came and ate lunch there with the students,” Halls says. “They’re involved in the process.”

Involvement and excitement on everyone’s part will keep the momentum going, Schlein and Hall agree.

The changes have already had measurable effects. One high school has seen a 21 percent increase in lunch participation and at another, participation has jumped 34 percent, based on before and after counts from January 30.

“This is a school district that has gone all out to make sure we’re getting our students fed,” Halls says, summing it up. “They’re boots on the ground, getting things done.”