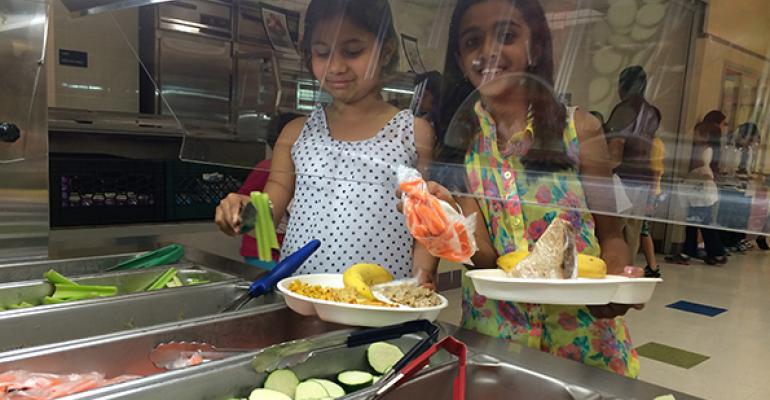 <p>It&rsquo;s all about the veggies. The Active Learning Elementary School went completely vegetarian in the 2014-2015 school year. Prior to that, the vegetarian items were gradually added to the menu.</p>
News & Trends>K-12 Schools

With more than 1,800 schools in its district, New York City runs the biggest and one of the most complex school foodservice departments in the country.

So when one of it’s schools, PS244Q—otherwise known as The Active Learning Elementary School or TALES—wanted to transition to an all vegetarian menu, the school foodservices department (NYC SchoolFood) proceeded with guarded skepticism.

“Before we make a change of this magnitude, we must exercise our due diligence and ensure that it isn’t just the principal talking or a group of vocal parents,” says Eric Goldstein, chief executive of The Office of School Support Services for the New York City Department of Education. “Our worry was that it was a small group talking for a large group.”

What the department found was that the entire PS244Q community was on board with the menu change and that the culture of the school created an environment where it would be more likely to succeed.

“Our mission is to foster academic excellence in a safe and caring learning environment, through a partnership of family, staff and community,” says Bob Groff, principal and co-founder of the school. “In addition to physical education, the students have regular nutrition education where we teach them about proper nutrition and reading food labels and the importance of a well-balanced diet.”

Even with all the buy-in, the process of going all vegetarian was gradual. A key factor in its success was a nonprofit called the Coalition for Healthy School Food, which has been working with NYC SchoolFood since 2005.

TALES started the process slowly with one vegetarian meal on the menu each week, then two, then three. It wasn’t until the 2014-2015 school year that it went completely vegetarian, serving everything from teriyaki tofu to veggie New York-style pizza and chickpea falafel.

“We’re a relatively small school with about 440 kids,” Groff says. “But still, it’s difficult to go against the norm and move our own way. Our relationship with the coalition has helped tremendously in this process.”

“We were able to facilitate the change,” says Amie Hamlin, executive director for the Coalition for Healthy School Food. “We helped develop recipes and work with the cooks to get it going.”

NYC SchoolFood already had a pretty extensive stable of vegetarian options in its database, but PS244Q continues to be the perfect test kitchen to expand those choices and cross-pollinate the dishes to other schools across the district.

“It was fairly easy to adopt this menu,” Goldstein says. “The cooks embraced it immediately and even offered ideas and recipes of their own.

“The biggest challenge on our end is that it is a separate menu,” continues Goldstein, who notes that the food costs for the all-vegetarian menu are negligible. “We love the idea, but we have to be practical about it. So making it work took finding the intersection of the idea and the practical application.”

The barometer of success came down to participation. “If participation dropped, we knew this was the wrong move,” Goldstein says. 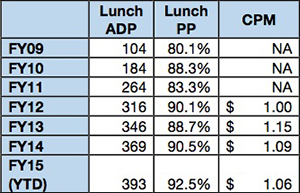 But it didn’t drop. In fact, as TALES introduced more vegetarian days to its menu, participation increased (see chart). “The participation rates for lunch are very high and the cost per meal is right within our range,” Goldstein adds.

When PS343, known as The Peck Slip School, heard about TALES’s vegetarian menu, it made the shift, too.

“PS244 and Peck Slip are the first non-charter public schools in the country to stop serving meat,” Hamlin says. “And so far it’s going very well with both schools. We have great partnerships, supportive parents and eager students who are adopting these new menus easily.”