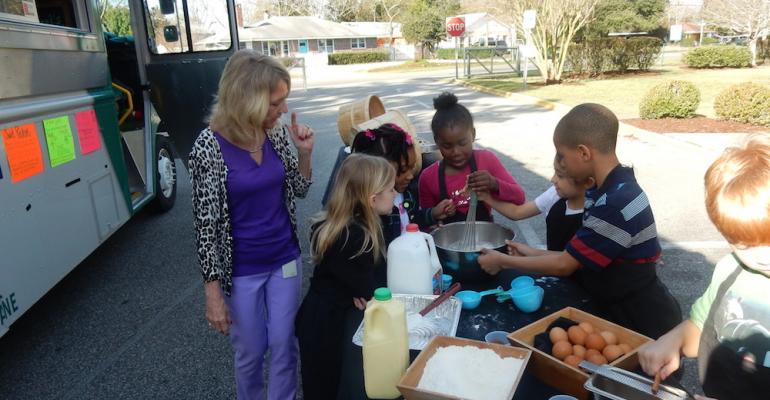 The University of North Carolina-Wilmington (UNCW) dining services recently joined with local farm-to-table advocacy group Feast Down East and the national FoodCorps nutrition promotion organization to bring some hands-on cooking instruction to second- and third-graders at three area elementary schools. The platform for the sessions was UNCW’s own food truck, which traveled to the schools. Matt Rogers, regional director for UNCW’s dining services provider Aramark, conducted the instruction assisted by FoodCorps representatives.

The truck made three site visits the week of March 7, to Forest Hills, Winter Park and Wrightsboro elementary schools, doing three to five hour-long sessions at each school for groups of around 20 youngsters per session. Rogers, a FoodCorp representative, teachers, teachers’ aides and volunteers oversaw the activities and assisted the kids.

FoodCorps has already been sponsoring a pair of service members annually to go into local K-5 programs to teach garden-based courses. “We took that partnership and ran with it and created a cooking course to lay on top of their existing curriculum,” Rogers explains.

The roadshow was the first of its kind. “We’ve been supportive in the gardening with financial help and volunteers, but this is the first time we’ve helped out with the teaching element of it and actually had these classes,” Rogers says.

The timing was right to hold the sessions the week of March 7. “It was our spring break and school was out, so it was a great chance to use an asset like the food truck, which is typically in operation otherwise,” Rogers explains.

The three schools the truck visited were those in the area that have FoodCorps partnerships, “but we’ve gotten over 20 requests since then from other schools that don’t have FoodCorps in their program to schedule a truck visit, and we’re looking at ways to do that,” Rogers says. “After graduation there’s a couple weeks in May and early June when we could do some things.”

The schools holding the food truck sessions each maintain a garden where students have been learning about plants and cultivation, and each had recently produced winter garden crops of items like kale, beets and sweet potatoes.

“We wanted to make a simple recipe that could use those products and that kids relate to,” Rogers explains.

The dish was sweet potato pancakes topped with a whipped beet cream. The garden bounty was supplemented with product from local farms where needed.

The goal was to provide some instruction on the use of natural products rather than artificial flavorings to produce a tasty dish; for example, using naturally sweet ingredients like beets, natural local honey and sweet potatoes rather than sugar or artificial sweeteners.

“We also talked about using food from our backyards or from the local farmer and how it’s more nutritious and so forth,” Rogers says.

The kids also got a tour of the food truck and its equipment before settling down to making the meal, which included doing everything from peeling and mashing the sweet potatoes to making the pancakes.

It was a new experience for some.

“A lot of these students may not have had a beet before,” Rogers says. “When we were carving, peeling and cooking the beets they were sure it would taste terrible, but once we got all those natural sugars together in that finished dish, they were like, ‘This is really good!’” he laughs.

“Just seeing their eyes light up with the ‘wow’ factor of cooking their own food in a cool environment in a food truck and then hanging around to eat with us was pretty neat,” Rogers says.

One On One With: High school signs Food Forward pledge to increase meatless options
Oct 18, 2021