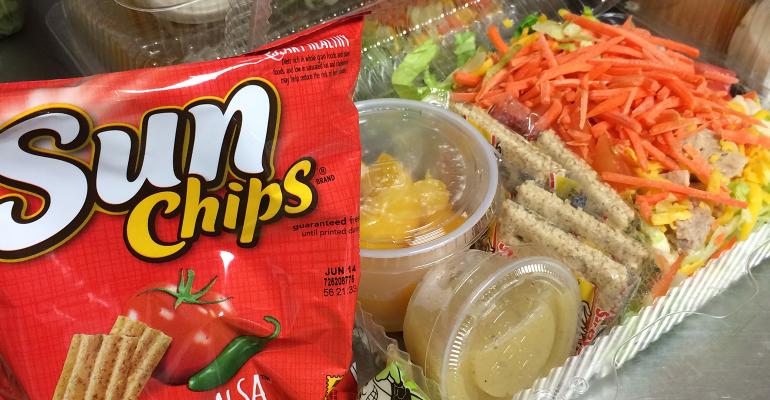 Moroni Pointer
One of the salad selections in the full-meal vending program at Lee High School.
News & Trends>K-12 Schools

It’s hard enough to get high schoolers to come to the cafeteria for lunch when it’s located conveniently. When they have to trek from building to building, forget it.

That was the problem facing the East Baton Rouge (EBR) Parish Schools in Louisiana with its new Lee High School campus, a magnet school for grades 9 to 11 that consists of a main building with a cafeteria and three annex buildings, all without one.

Inevitably at lunchtime, a considerable number of the school’s 786 students would be at one of those cafeteria-less buildings facing a choice: spend a portion of the lunch period walking over to the main building and then getting in line in the cafeteria, or staying where they are and socializing with friends. If you were 16, what would you do?

So the district nutrition services department decided that if students won’t come to the food, then the food could come to them, and it would be nutritious, full meals that qualify for federal reimbursement. Students get three entrée choices each day, rotated on a one-week cycle. They always include a parfait—the most popular choice, chosen by more than half of the students—a salad and a wrap or sandwich. The machines also have choices of sides to go with the entrees that qualify them for federal reimbursement.

The options are the same as those offered at the main building cafeteria, which also has a hot option and a second sandwich choice each day.

EBR is a full CEP district due to the ravages of the August 2016 flood that damaged some 100,000 homes in the area and left thousands homeless, so all students qualify for a free lunch, simplifying the checkout process for those using the machines. To get a qualifying meal (which requires the purchase of one entrée and one sides package), a student simply enters a date of birth and a PIN. Those desiring to get additional food need to have a debit account to access as the machines do not take cash or credit cards.

“It was just like having another remote line,” explains Technology Coordinator Claire Rovira about the POS system on the vending machines.

The full-meal vending option was initially piloted in the spring of 2016 at Baton Rouge High, another EBR magnet school where a couple of the vending units were set up in the cafeteria and helped contribute to a 33 percent bump in lunch participation.

“They expanded the meal choice, gave us [two additional] serving lines [that] helped reduce wait times and offered a [grab-and-go] alternative for students who wanted some quiet time to get meal and go outside with it,” says Dr. Nadine Mann, administrative director of the district’s child nutrition program, in explaining the positive impact of the machines on student willingness to patronize the cafeteria. “Also,” she adds, “it’s a high-tech magnet for tech-savvy students.”

As EBR had never previously served vended school meals, Mann and her team had to do some research about system options, which included visiting Miami-Dade Schools in Florida to observe that district’s robust vended meals program.

Among the challenges was coming up with menu items to stock the machines and the packaging to make them attractive and convenient. As it turns out, the packaging created for the vending program has an additional promotional impact for EBR Child Nutrition as the wrapper incorporates the department’s name and message: “EBR Child Nutrition Program: One Team, One Mission,” which is also now used in the breakfast in the classroom and supper programs.

“It helps get our brand out there to the kids,” Mann observes.

The vended menu items emphasize popular selections, says Purchasing Coordinator Emily Hartman. “When we researched what to serve, we looked at what kids like and put those on the menu,” she says.

One obstacle that had to be dealt with was that the machines do not vend hot foods, only chilled, which can limit options for some federally mandated components such as beans.

“To serve beans from a chilled vending machine, there aren’t a whole lot of choices other than bean salads,” Hartman observes, “so we created a cold taco bean dip recipe and kids love it.”

Another popular cold dish is the cold mashed potato salad.

The food for the vending program is produced and packaged in Lee High’s production kitchen. Each machine holds 96 packages (48 full meals), which is replenished between lunch periods as needed.

The machines only operate at the lunch periods. Breakfast is served in the cafeteria and also from two mobile carts that set up in the courtyard where students come in from the parking areas. Selections include pre-packaged products like mini pancakes, breakfast pizza, turkey sausage biscuit sandwiches and whole-grain cereal pouches with yogurt.

Participation for the morning meal is averaging 457, well over half the student body.