“Since starting as a chef in schools, it has been a passion of mine to change the stigma/perception of school food, which is why I’m so active on social media,” Polson says. “These videos are another way to help that mission.”

An example of a meal box provided to Minneapolis kids and families. Polson looks at what’s inside each week and makes her videos accordingly, seeking out recipes that work with the ingredients and aren’t too complicated. However, her recipes and ideas are anything but basic!

Sophisticated-yet-approachable ideas like this snacky charcuterie platter have been great for families, and “the feedback from the community and beyond has been amazing,” Polson says. “I love getting to interact with parents on a more personal level.”

Tamales to make at home

When it comes to filming cooking videos, Polson says to keep it casual! Taking a cue from the informality of YouTube videos, Polson doesn’t sweat it when something goes wrong or you don’t know all there is to know about filming. “I’m a chef, not a videographer, so I have no idea how to edit, so everything is filmed in one take. Once you start you can’t stop…just gotta push through,” she says.

Polson advises to laugh it off when unexpected moments happen in videos. “Like the time I didn’t press the power button on my blender and couldn’t figure out why it wouldn’t work,” she recalls, “or my dog Roxy popping in when I’m making something she wants to try.”

Filming at home has upped Polson’s comfort level with making video content. “I originally had a coworker helping me with filming in her kitchen, but found I was more comfortable filming by myself in my own kitchen,” she says. “That way I can mess up as many times as I want without any pressure.”

Polson’s kitchen doesn’t have great lighting, so she turns on all the lights and prays the sun is out when she films. Other advice? “Try to keep it short and simple,” she says. “Prep and mise en place are extremely important. I try to have all the knife work completed and everything measured out. If something has to baked for an hour, I make one ahead of time so I can magically pull it out of the oven after putting the one in I made during filming.”

The community connection has been the best part of the video series, Polson says. “Some days, I’ve been working at a pickup site, and parents have come through the drive-thru and asked if I’m Chef Rebecca, then tell me how much their family loves to watch the videos, recreate the recipes and how helpful the boxes have been. It brings me so much joy knowing these videos are a highlight and bringing families into the kitchen to cook together.” 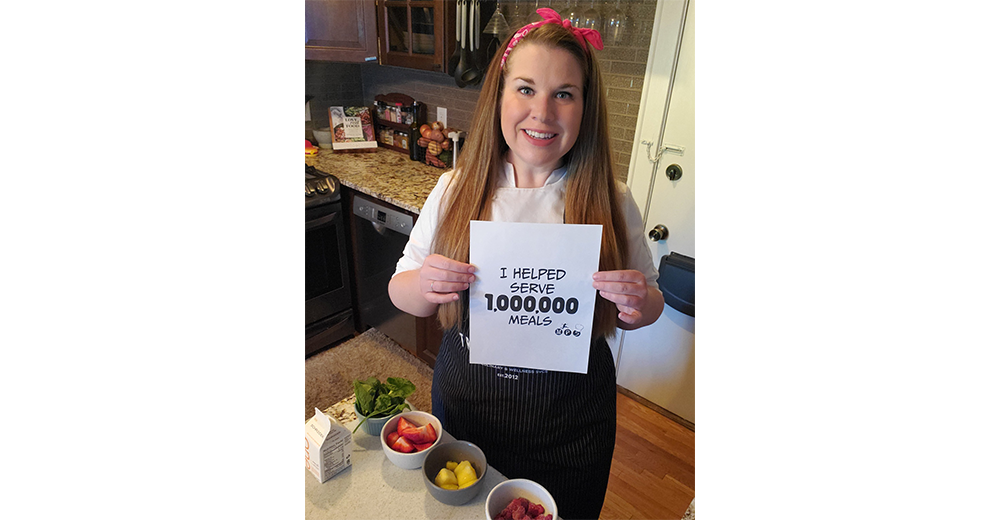