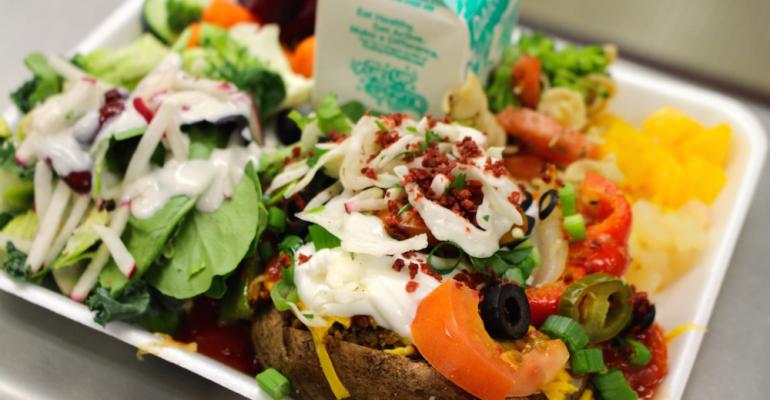 The chef-led program at Wenatchee School District prioritizes “quality, variety and keeping it in our local area.”

Kent Getzin, a classically trained chef and director of food services for Wenatchee School District in central Washington state, had his sights set on a self-operated meal delivery system from the very beginning.

When he took the job in 1999, the district was serving 1,500 meals daily to a student body of 7,000. Quality and timing were culprits in the program’s lackluster participation. School lunches were prepared by an outside meal delivery service that shipped hot meals at 6:30 in the morning to school lunchrooms, where they sat in warming trays until lunch service.

“It was just so bad. The food was terrible,” Getzin says.

In response, Getzin made wholesale changes his first year, starting with salad bar installations in each of the district’s 14 schools and the discontinuation of the meal service. The boost in quality made an immediate impact.

“Our numbers went crazy,” Getzin remembers. “It was kind of like something caught on fire.”

​Getzin and his staff soon reconfigured the meal delivery system and started cooking entrees from scratch. A decade later, they established a farm-to-school sourcing program. Today, they serve 5,000 meals every day.

Before any of that could happen, Getzin had to train his kitchen staff, starting with knife skills. Learning to cut, slice and dice wasn’t easy; some longtime employees left. But Getzin’s commitment to top-notch meal delivery, as a Culinary Institute of America graduate and former executive chef, made him pragmatic about growing pains.

“There was an adjustment period in getting people to rethink quality and freshness,” he explains, “but we just kept pushing ahead.”

They did so first by filling the salad bars with a parade of fresh produce, beyond typical salad bar fare. Locally grown French breakfast radishes have made an appearance as have sungold tomatoes, pluots, nectarines, broccoli florets, slices of summer squash, pink-fleshed apples—the list goes on. Wenatchee’s students choose from an array of eight to 10 fresh produce options every day.

Getzin led the district in a gradual elimination of items such as chicken nuggets, frozen burritos, flavored milks and peeled “baby” carrots, in favor of healthier options, whole-muscle meats and scratch-made entrées. Meals, including scratch-made versions of classic cafeteria food such as chili and chicken noodle casserole, are prepared at the four schools that have kitchens and delivered throughout the district.

In perhaps his most profound reform, Getzin changed meal service in the secondary school lunchrooms to an assembly line format that allows students to design their own meals. The model, which Getzin calls the “deconstructed casserole method,” is amenable to a variety of cuisines and simplifies menu planning.

The district serves one entrée every day, such as lo mein noodles, tacos, pasta or a baked potato bar. Since ingredients are kept separate from one another, there’s no need to prepare a separate vegetarian option. Meals are fresher and look more appealing on the tray and leftovers can be readily incorporated into new dishes, saving the district money.

The district has long sourced local apples for the lunchroom (the region is a world leader in apple production), but in 2009 it launched a wider local sourcing effort, forming partnerships with a handful of local farms. It proved less logistically challenging than imagined. Farms agreed to deliver produce independently to each of the school district’s kitchens and to offer competitive rates. The district works with farmers to make the arrangement beneficial and sustainable.

“I didn’t want farmers to feel nickel-and-dimed,” he explains. “We did a lot of work to make it a smooth, easy transition.”

This is the district’s eighth successful year sourcing local foods. Though the district still orders select commodity ingredients, local products from farm partners make up a large percentage of its food budget. The first farm-to-school year, it spent $5,000 on local produce. Last year, the district invested $103,000 in products from 12 local farms.

And they’re not slowing down. Getzin has expanded the scope of his local purchasing program to include local dry beans, Washington-produced yogurt and flour from a regional cooperative of grain farmers. Local beef has been in rotation for three years. Last year, local pork was added.