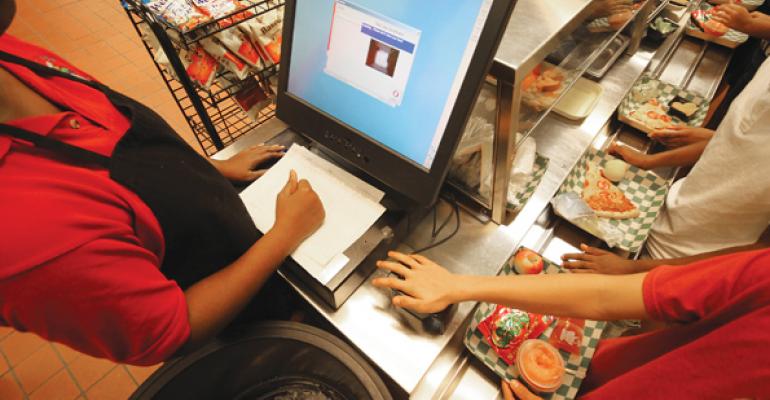 Many schools set up POS systems so no distinction is apparent as to whether a student has paid for a meal or is receiving it free or at a reduced price. But when paying students run out of credit, there is no easy answer in terms of how to handle the problem.
News & Trends>K-12 Schools

What Do You Do When...The (Lunch) Credit Runs Out?

FM recently asked its readers how they proactively maintain a positive public image.

Beyond feeding what might be the pickiest demographic, school foodservice directors also have to balance a complicated program awash with tighter budgets, higher costs and new school meal nutrition standards.

At the same time, they have to proactively maintain a positive public image. That usually means not turning away students—especially in younger grades—who don’t qualify for a free meal but simply show empty pockets at the cashier station. So what’s a director to do?

FM recently asked its readers this very question in an online poll. Of more than 200 FSDs responding:

✓ More than half of respondents said they give children an alternative meal as soon as their account reaches zero (typically a peanut butter or cheese sandwich and milk);
✓ 39% said their policy allows students to charge the cost of meals, up to a certain amount;
✓ 14% say they continue to feed such students reimbursable meals and absorb the cost;
✓ and 5% said they refuse to serve the child.

For districts that allow students to continue to charge meals, the practice often becomes problematic. Budgets are tight and often growing tighter with the added costs of meeting the new USDA regulations. For large districts, annual unpaid charges can easily run into six figures. At the same time, no one wants to see a child go hungry.

How do you deal with lunch line students who are overdrawn on their lunch accounts and have no cash to pay?

Schools employ a variety of strategies to collect on debts owed, but collection procedures create their own set of problems. Tactics include phoned, mailed and emailed repayment reminders to parents, working with school principals to enforce repayment and even the use of collection agencies.

As part of its legislative agenda this year, SNA petitioned Congress to require that USDA establish a consistent, national policy on school meal charges and how schools should address these debts.

“What’s interesting about this issue is its universality,” says Brooks. “It’s not a localized problem—across the country we’re all seeing the same trends.”

Students in the reduced price category “struggle the most with this,” says Brooks.

The power of breakfast

The Metropolitan School District of Wayne Township, Indianapolis, IN, concurs. There, free/reduced price eligibility is almost 79 percent and “we have families who struggled to provide their children with the $.40/day lunch co-pay.

“We did a cost/benefit analysis by eliminating the Reduced Price meal charge in several pilot schools,” says Sara Gasiorowski, Wayne Township’s Food Service Director. “They were given meals as if they were free, but they were claimed as reduced price.”

Gasiorowski says participation increased substantially, with accompanying revenue. Even though food costs increased, since labor costs remained stable, “the elimination of the Reduced Price lunch co-pay almost breaks even. That was our goal.”

Wayne Township allows K-6 students to charge up to three meals before serving an alternative lunch, which consists of a peanut butter sandwich and milk. Students in grades 7-12 cannot charge and are instead offered an alternate meal if they are unable to pay.

SPS allows students to charge up to three meals before they are given an alternate meal.
To collect on the charges, negative balance letters are sent home, managers make phone calls and an automated calling system dials daily until the funds have been repaid.

“In the past, we’ve worked with the principals at some schools to establish a plan where every child is served a reimbursable meal regardless of his or her ability to pay,” says Gasiorowski. “If we can’t collect, we bill the principal for the balance owed.”

Gasiorowski reports that the problem has actually improved in recent years, something she attributes to the district’s universal free breakfast program.

“We used to have students spend their lunch money on breakfast,” she says. “With universal breakfast, we no longer have that issue.”

“When we updated our policy, we wanted to create guidelines that balanced the needs of students with the financial risk for the district,” says Aaron Wylie, Director of Child Nutrition.

“We previously did not allow charging for secondary students, but in my experience, I believe that is too restrictive. Allowing one charge helps prevent throughput slowdowns” and makes it easier to deal with occasional delays in posting credits to individual accounts, he says.

“These types of issues are usually addressed quickly, but allowing secondary students one charge helps us give better customer service to students and their families.”

EMS promotes what it calls the “Bank-a-Meal” program, which encourages parents to keep a positive balance with their childrens’ accounts. Its online payment system makes pre-payment easier.

SPS and MSD of Wayne Township also offer online payment systems and promote a feature that allows parents to see what their children choose for lunch meals, emphasizing the role it can play in encouraging healthier lifestyles.

The state of West Virginia has taken a different approach with its 55 districts. Using its statewide POS system, it switched entirely to direct billing.

“We feel it’s important to take the child out of the equation,” says Rick Goff, Executive Director at the Office of Child Nutrition for the West Virginia Department of Education.

“Any student, regardless of the family’s income level, can go through the line and pay in the exact same manner. There is no way to identify on the line who is free or reduced.”

At the end of each month, parents of qualifying students receive a lunch bill. It’s as simple—or as complicated—as that.

“Once we switched to billing, we saw participation increase substantially,” says Goff. “That increased our federal funds enough to offset the cost of any negative balances.”

Each district is required to have a board-approved collection policy so all parents are treated uniformly. The state also arranged with Visa to allow parents to use credit card payments toward unpaid bills.

Students in the reduced price category present the most problems in West Virginia as well, says Goff. “That group comprises 10% of our student population.”

Looking to relieve some of the pressure on the reduced price segment, the state launched a three-year West Virginia Universal Free Meals Pilot Project in 2011. The pilot provides a nutritious breakfast and lunch to all students regardless of financial need in 72 schools in seven counties.
“Universal free meals takes this issue completely off the table for all of those involved,” says Goff. “In an ideal world, all of our schools would be universal free.

“We don’t charge our students to ride the bus or for books, but we charge them for lunch,” he adds. “As this issue continues to evolve, we’ll see an even greater movement toward universal feeding.”