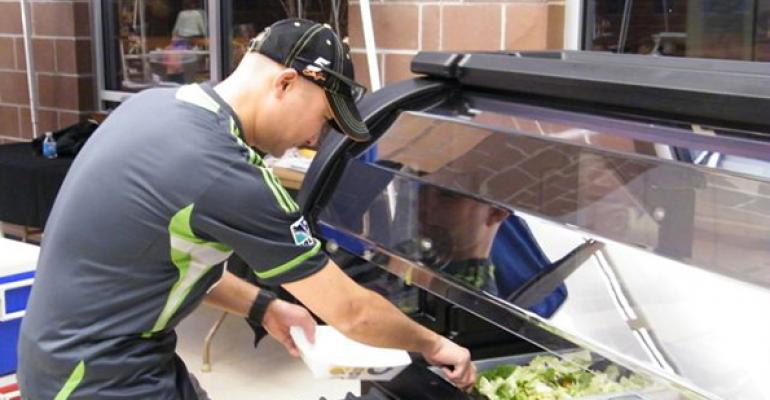 Why Douglas County Pulled Its High Schools Out of NSLP

Affluent district fights to keep students on campus at lunch with healthy but attractive commercial-style offerings.

Maybe it was the pizza that got Brent Craig cheesed. At any rate, it was a tangible example of how new school meal regs would affect the lunch program at the Douglas County (CO) Public Schools.

Craig, director of nutrition services for the district, had been serving a high quality pizza at the system’s nine high schools and the product helped attract an impressive 50-55% student participation (counting a la carte equivalents) to the school cafeterias despite open campus policies in the affluent district outside Denver.

However, new federal requirements limit pizza servings to no more than 350 calories. To achieve that, Craig explained to the Douglas County School Board that he would have to switch out the real cheese he had been using for an artificial cheese that was lower in fat (and, hence, calories).

For Craig, whose school nutrition operation only has six percent of its enrollment qualifying for free or reduced-price school lunches, and less than that in the high schools, the rationale for staying in the National School Lunch Program took a significant plunge with the new regulations. So he asked the school board to allow his high schools to drop from the program.
In late July they agreed. “It breezed through,” he says.

“We very much support the USDA and the Healthy, Hunger-Free Kids Act,” Craig is quick to emphasize, noting that the district will keep its elementary and middle schools in the program. Indeed, under Craig’s direction, Douglas County has been one of the most progressive of school nutrition programs in the country at promoting healthy eating, reducing fat and sugar content, adding whole grains and serving fresh fruits and vegetables. All 83 school sites have Whole Foods Harvest Bars brimming with standard and exotic fruits, vegetables and even vegetable proteins like quinoa and hummus that students are encouraged to patronize with no restrictions.

And until this year, the program has also been able to accommodate increasingly stringent federal school meal regulations.

“When the first round of the HHFKA hit in 2012, we breezed through it,” Craig says. “However, you have to realize that in our high schools, 90-95 percent of our sales are a la carte. That doesn’t mean junk food, but the Smart Snack restrictions in the third round of regs would have crippled us.”

“What would happen is that we would go from a 14-person kitchen in a high school that does $2,700 a day to a kitchen that needs only two or three people and feeds a hundred kids a day, because with the open campuses most would just get in their cars and go to a fast food joint. How is that helping them eat healthy?”

The district would also have had to eliminate its popular Subway branded outlets from the high school cafés, a million dollar a year revenue source that would be almost impossible to replace. The Subways serve a carefully selected portion of the chain’s menu that at least until this year met federal healthy eating criteria. Douglas County is a Subway franchisee that prepares the food on premise—no buying pre-made sandwiches from an outside franchise holder—and uses the chain’s required proprietary ingredients.
Meanwhile, Craig notes, the increase in reimbursement that accompanied the new regs would have almost no effect on a program where most students are cash customers. “Everyone got a raise but us,” he laments.

In addition, many of the grant programs that help districts implement some of the programs according with USDA goals are out of his reach. “You can’t even apply for them unless you have 50 percent free and reduced.”

“Withdrawal from the federal lunch program was the best choice to stay financially viable,” Craig says. “We are an enterprise fund that supports itself and we intend to stay that way because we don’t want to take dollars out of the classroom. This move makes sense from both a business and a nutrition perspective because we now have some more flexibility to balance what’s palatable with what’s good for the kids.”

Thought was also given to withdrawing the whole system but it was decided that because there was little a la carte sales activity in the middle and elementary sites, continued participation in the NSLP was preferable. Craig notes that this reinforces the fact that Douglas County remains a strong supporter of the HHFKA goals. “We are not thumbing our noses at them or going rogue,” he says.

But in the high schools, the open campus policies combined with the miniscule number of students qualifying for free/reduced price meals means that Craig must fight for the business every day against a forest of fast food outlets and c-stores sitting near the school sites.

“The district free-reduced is six percent but that number is only around four percent in the high schools and less than one percent actually take reimbursable meals on any given day,” Craig notes. “They have cash in their pockets and even though they qualify for free meals and we offer reimbursable meals, they choose to eat Subway.”

“We will continue to support all qualifying students needing subsidized meals,” Craig is quick to note. The district will pick up the tab, estimated at around $167,000 for the year.

To make up that lost federal revenue, Craig will rely on continuing to service attractive food at the high school sites.

“You spin your wheels if you try to tell high school kids how to eat so we try to bring them the kinds of foods they seek,” Craig says. “We do a lot of research on where they go when they leave campus and where the hot spots are.”

In addition to the Subway, each high school also serves pizza. “We use a pre-made cheese pizza as the base and add various toppings like roasted veggie with balsamic glaze,” Craig says. “We have about 10 different pizzas.” This year the program is moving to a seven-inch pizza that will be prepared in pizza ovens at the station and can be topped to order.

Other stations at the high schools include an Asian food bar modeled on the Panda Express chain, though with much healthier offerings; a burrito bar based on the Chipotle chain, again with less fat, sodium and calories than that concept typically offers, but with the burritos and salads assembled to order from (carefully selected healthy) ingredients sitting in front of the customers just like the chain has; a burger bar featuring a high grade steakburger; and a franchised concept called Blendz that offers smoothies with no added sugar and healthy ingredients like IQF (individually quick frozen) fruit, 100% fruit juices and yogurt.

Executive Chef Jason Morse works with students from the ProStart program to develop menu ideas, including most recently the burrito bar. “These high school culinary students develop these ideas, recipes and menus and then go out and market them, very successfully, to other kids,” Craig notes. “The burrito I think rivals what Chipotle puts out, though it’s not nearly as big or with as many calories.”

“I’m very proud of our record,” Craig says. “ We use whole muscle meat and follow most of the guidelines, though we’re having fits with the sodium regs, and it’s just the first round. Even in the elementary and middle schools it’s tough because we’ve had to take things like pickles off the menu and go to low-sodium ketchup that costs us a lot more.”