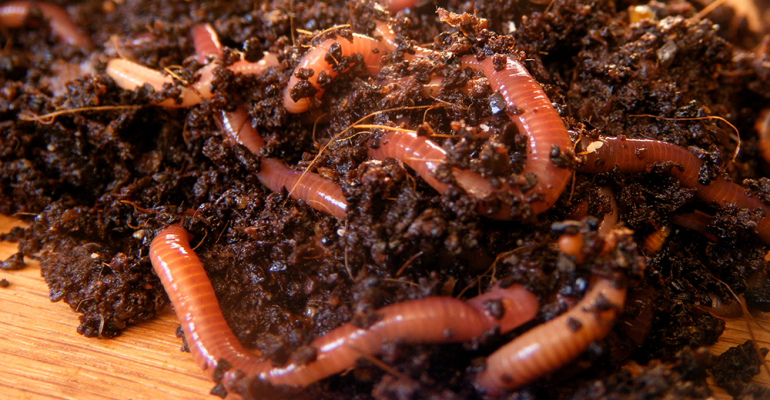 mzajac/iStock/Getty Images Plus
Did you know worms can divert fresh food scraps and turn them into awesome fertilizer?
News & Trends>K-12 Schools

21 elementary schools get two pounds each of red wiggler worms and everything needed to get things wiggling with vermicomposting.

As any good science teacher knows, if you get the kids saying, “Ew!” you’ve definitely got their attention.

“Talking about worm poop always gets the ‘ews’ going,” says Jordyn Vitorno, one of a group of ten FoodCorps Service Members working within the 21 elementary schools of Oakland (Calif.) Unified School District (OUSD) to set up worm beds in learning gardens and integrate worm lessons into the curriculum for more than 7,000 students.

According to Vitorno, “a few brave souls got to hold the worms and eventually the majority of students worked up the courage to hold a worm or two!”

The lesson also teaches about sustainability. While regular composting is still the main way fresh food scraps are diverted in Oakland schools, worm composting—vermicomposting—is a living lesson in one of nature’s amazing life cycles.

In one class, students played a nutrient cycle card game with six picture cards: a person eating an apple, throwing the apple into compost, a worm eating the apple, the worm excreting compost (called worm casings) and the compost supplying nutrients for an apple tree to grow. To win the game, the cards end up in a circle.

Students learned that compost worms aren’t just any worms—they’re a special species called Eisenia fetida, often called “red worms” or “red wigglers.” These little guys are different from nightcrawlers, which burrow several feet below the surface of the ground. Red wigglers are perfect for compost because they’re surface dwellers, found in nature in shallow piles of leaves, for example.

When caring for a worm bin (basic wooden structures with removable screens and hinged lids, with holes drilled for breathability), there’s a checklist to keep in mind: food, moisture, bedding and darkness. Another FoodCorps member, Kaitlyn Kuehn, got her group of grade-schoolers to observe worms in a bin and feed them with small, broken-up vegetable scraps.

“We discussed how worms don’t have eyes, ears or teeth, so to find their food it helps to move them on top of it and beak it into smaller, more edible pieces,” Kuehn says, adding that the students also made “worm tea,” a nutrient-rich mix made from worm compost diluted with water to spray onto plants for a fresh mist of fertilizer.

Hands-on science is playing a big role in the education piece of the worm bins, with some classes collecting data with scales, moisture meters, pH gauges and thermometers. Student cafeteria leaders are set to be selected and trained to be in charge of the worm bins later this month. They’ll be charged with establishing a rotating system for waste diversion to the worm bins and keeping records of how many food scraps are contributed by students.

On average, fresh food scraps have been diverted to worm bins at an approximate rate of 7 pounds of food per week, but that’s a small fraction of the overall average of school composting done the traditional way in Oakland schools: often two five-gallon buckets of food waste are diverted per day sans worms, says Suzanne Ludlum, school garden coordinator at OUSD.

She points out that worms definitely have their limitations: They can’t eat acidic citrus fruits (which make up a lot of the winter fruit served); and when school breaks happen, someone needs to tend the worms, or else order more worms when school is back in session.

That said, Ludlum finds that active worm bins are “great education for kids.”

“Composting is much better for handling this scale of waste,” Ludlum says, “But I grow worms because the kids love them.”