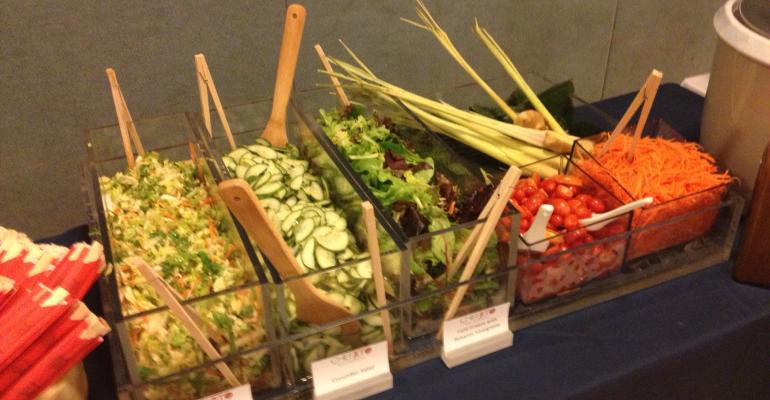 Tila, a celebrity chef, consultant and teacher, had worked for months to develop a kosher program based on his Chef Jet Modern Asian Kitchen concept, already successful at 14 Compass Group accounts across the country, including education, healthcare and B&I.

Having lived for a time years ago in a Jewish Orthodox neighborhood of LA, Tila learned about kosher cooking from catering jobs. The word “kosher” means “fit” or “proper” and it’s used to reference Jewish dietary laws regarding what foods Jews can and cannot eat and how the foods are to be prepared and eaten.

The rules have their basis in the Torah (known to non-Jews as the “Old Testament”), and they go way beyond the simply not eating pork. Almost any cuisine can be made kosher with the proper ingredients. So to turn his concept kosher, Tila spent time researching, testing different flavors for kosher substitutions and consulting with supervising rabbis from different kosher food companies.

“The biggest challenge turned out to be the sauces that we use in Asian cooking,” Tila says. Oyster sauce is a huge ingredient, especially in Chinese food, so Tila took other sauces that were kosher and blended them to create his own proprietary kosher version of oyster sauce. (Shellfish are among the prohibited foods under kosher dietary laws.)  A boon to this process will be fish sauce and soy sauce companies that are seeking and getting approval by kosher authorities, noted by symbols on packaging that most people overlook but which many Jews carefully scope out when shopping.

For example, a fish sauce may be technically kosher in terms of ingredients; however unless the preparation is not carefully supervised according to kosher guidelines, it might not pass the test. The kosher symbols remove doubt.

Tila’s diligence has resulted in a new kosher Asian fusion menu. His signature crowd-pleasing dishes, like Chicken Teriyaki and Thai Basil Tofu can be savored by observant Jews. And the menu now has the potential to make its way into more Compass accounts with a Jewish population. “There’s a need for it in higher ed, B&I and healthcare,” Tila says. “They’re looking for coherent, competent kosher menus.”

Tila’s concept brings an updated version to what is already an established culinary connection in the Big Apple.

“New York City ‘American style’ Chinese food and the Jewish community go hand in hand,” says Jerry Musillo, Flik Independent School Dining regional director-New York City Metro.  An age-old inside joke among American Jews, as explained on the website Jewfaq.org, is “many Jews go out for Chinese food on Christmas,” as Chinese restaurants are among the few eateries open on this holiday. Notes the site, “In fact, Justice Elena Kagan mentioned this in her Supreme Court confirmation hearings: when a senator asked her where she was on Christmas, she said, ‘You know, like all Jews, I was probably at a Chinese restaurant.’"

The kids at the Ramaz School were thrilled to meet Tila, who has an energetic personality and is known for making events very interactive and fun. The new items debuted at lunch, and gave the students at taste of the cool, West Coast-style Asian fusion that Tila is known for.

“What I love most is that it covers our mission of teaching children cultural diversity through food,” says Joann Khoder, FMP, VP of Support Services at Flik. “For our kosher students, having Chef Jet there to share his cuisine with them, it brings it all home and it’s really exciting for the kids.”