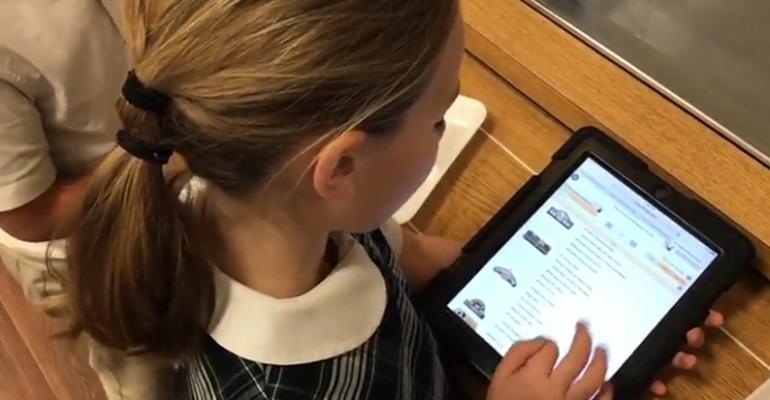 An in-house developed app gives students on special diets a quick way to identify the options they can eat at Sage Dining-managed school sites.

Students with food allergies or other dietary issues traditionally have some difficulty navigating lunch lines, especially at K-12 sites. But for youngsters enrolled in schools where the cafeteria operation is managed by Sage Dining Services, the process is as simple as a touch on a mobile device.

That’s because for the last several years, Sage has deployed an in-house developed electronic allergen filter app at all sites where it operates. Installed on tablet computers that can be accessed in the cafeterias, the app integrates with the menu management software to categorize each dish being served that day by potentially allergenic ingredient.

The most common, such as gluten, soy and sulfites, are displayed as buttons on the screen that shows the day’s menu. When a student goes to the page, he or she can select which allergens or ingredients need to be avoided by touching the appropriate button(s). The app then ghosts out all dishes that have the ingredient or allergen, and the student can then select from the rest.

There are also buttons that isolate vegetarian and/or vegan options for students who follow those dietary regimens.

A video illustrating the process can be viewed here:

The app is simple enough for even the youngest students to use, says Lesley Vogel, director of nutrition for Sage Dining.

“We will also work with parents to make sure it is understood, and, of course, we also consult regularly with school nurses to make sure we understand the allergy issues at each school,” she adds.

One substance no child has to worry about is nuts, as Sage serves no nuts or nut products at any of its K-12 sites.

“We decided to remove peanuts and tree nuts because they are the most common food allergen among children, and they also tend to produce the most dangerous reactions,” Vogel explains. She adds that if a school has an unusually large concentration of children with some other allergy, foods with that allergen will be eliminated at that specific site.

The allergen filter and the ban on nuts is just one step in Sage’s food allergy management program. The company is currently in the process of reinforcing the seriousness of the food allergy issue to its unit-level staff with training and a video featuring the Natalie Giorgi Sunshine Foundation that discusses the severity of the issue and how to handle any situation where it arises.

The Foundation was created by the parents of a child who died from an allergic reaction to peanuts to spread public awareness, provide education regarding emergency responses and increase the availability of epinephrine injectors in public places.

Maryland-based Sage Dining manages foodservice primarily in the private K-12 school market nationally but also has some accounts among private colleges. It operates at some 250 locations and feeds an average of 150,000 students daily during the school year.

The company offers a series of proprietary branded concepts and an extensive recipe database that can be customized to the specific preferences of each school. Because most of the company’s clients do not participate in the National School Lunch Program (NSLP), the offerings have more flexibility and variety than would be typical in schools that must hew to USDA regulations to qualify for NSLP subsidies.

Nevertheless, Vogel says, the menus are healthy and emphasize fresh ingredients and scratch preparation as well as variety to encourage participation.

The company strives to ensure that even student whose choices may be limited by food allergies still have enough options.

“For example, if we know there are kids in a venue with a milk allergy, we want to make sure that every day on the menu there’s not just the chicken breast and rice [day after day] but a good variety of other choices as well. So a child with an allergy can still come in and feel a part of the community instead of getting a special box or going to a separate station.”