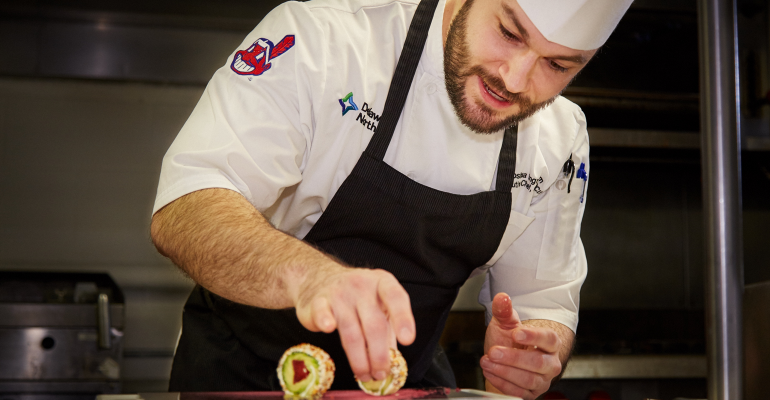 Delaware North
Josh Ingraham, executive chef with Delaware North at Progressive Field played varsity college baseball but “made it to the major leagues as a chef.”
Operations>Management

Josh Ingraham on bench strength, better health for cooks and chefs, the World Series and getting schooled on pierogis.

Speaking by phone, Josh Ingraham is standing in the middle of center field on a recent spring day, an “off day,” when the Cleveland Indians aren’t playing. All quiet at Progressive Field—for now—and Ingraham, executive chef with Delaware North, talked to FM about feeding fans and inspiring his foodservice team to new levels.

Q: You’re not from Cleveland, are you?

A: I was born in Maine, lived most of life in New Hampshire and later I moved to Boston. I was executive chef at the Boston Symphony Orchestra and the luxury suites chef at the TD Garden. My wife is from Cleveland, and before our first baby was born, she wanted to move back.

Q: Since Progressive Field features collaborations with more than a dozen local restaurants, you’ve had the chance to meet a lot of those chefs. What’s it like to work with them to translate their concepts to ballpark food?

A: It’s added pressure, but it was a great way for me to get integrated into this community really fast. Collaboration starts in the beginning. I travel to their operations and take notes. I love to get out there and meet them because food is such a great medium for showcasing our neighborhoods and our ballpark. The chefs from the different concepts train our staff. Some days I’ll see Eric [Williams of local Modern-Mexican restaurant Momocho] working here and I feel like my reinforcement is here. Today we had training for Barrio [another Cleveland restaurant with a concept at Progressive Field]. I want to make sure it’s the same quality of food that comes out of their restaurants.

Q: What are some new dishes you’ve been working on that you’re excited about?

A: Veal Parmesan in a mini brioche…it’s a collaboration with a local sausage maker. Everything for veal Parmesan—marinara, veal, cheese—it’s all inside a sausage. And we have some great vegan menu items at the Terrace Club (a sit-down restaurant that’s now open for a la carte sales). A fan told me, “I’m vegan and I had to pull meat off a salad and I left hungry.” That’s the worst thing you can hear as a chef. I don’t want anyone to leave hungry. So we did a plant-forward menu. There’s a Thai beet burger with peanut sauce, and also falafel, a daikon radish and asparagus salad and a vegan chocolate mousse made with aquafaba (the viscous liquid in a can of chickpeas that can be whipped up). Veal Parmesan sausages are made by a local sausage maker.

Q: How has the city of Cleveland influenced your cooking?

A: Since I came from New England I had to get schooled on pierogis! I get it now; it’s a Cleveland thing. The Po Man sandwich features locally made items: kielbasa, sauerkraut and pierogis with Dortmunder Gold beer combined with Bertman’s mustard (iconic brown stadium mustard). Cleveland is the unofficial capital of the North Coast, so I’ve been thinking: What is North Coast cuisine?

Q: Tell me about the World Series last year (other than featuring the candied short rib apple. How did it affect the foodservice team?

A: Nothing compares to partying with 37,000 of your closest friends. It’s just intense. The playoffs were crazy, and as soon as the team came back from a 14-game winning streak, we started selling out. I was starting to lose staff, because most are seasonal. They’re like, “Chef, I need this next job; it’s going to take me through the rest of the winter.” Even though they wanted to stay and help. I get that. No one expected this team to make it this far. During the away games in the series, we were doing watch parties here and they were all sold out. There was no one on the field, but the stands were full. I had 17 executive chefs from other Delaware North helping me. The support was unbelievable.

Q: What’s your approach to training your staff?

A: I say all the time, “I’m only as good as my staff.” Producing chefs here who can go on to other accounts…that would be the greatest compliment to me. The Food Intelligence Team (FIT) was created to help develop our culinary talent from within.

Q: How does FIT work?

A: I adapted a previous teaching model from my time as a Master Martial Arts instructor and integrated ACF standards and techniques throughout the system. After the program’s first two weeks, it yielded two level-one certified cooks who are now on track to learn the standards for level 2. In order for them to complete level two, they must nominate a peer and teach them level one. To have the credibility to teach a skill—like breaking down a chicken—you get more out of it and learn more. This program is designed to be self-sustainable. I thought, “Why not partner with Tri C (Cuyahoga Community College)’s culinary program?” and I hope to do that. That’s how my brain works; it doesn’t shut off.

Q: You played baseball in college. Is that why you were drawn to sports foodservice?

A: Everyone takes a different path…it could be restaurants or it could be catering, but I’ve always been around sports. It’s really exciting and we have everything: suites, fast-casual concepts, catering, restaurants…you can show interns so much of the foodservice industry by having them work here. It’s also unsettling because there’s so much to do. That’s my personality, though, I’m always looking to start maybe more than I can handle. It’s funny: I went to college for baseball, but I made it to the major leagues as a chef.