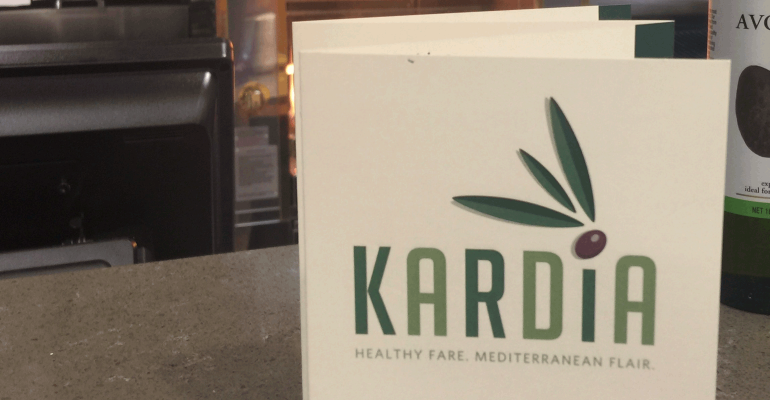 Best of Show winning UNC REX Healthcare is a trendsetter with its focus on serving chef-driven fresh, healthy fare with commercial flair.

UNC REX Healthcare under Culinary & Nutrition Services Director Jim McGrody has for years been one of the trendsetters driving hospital foodservice into serving fresher, healthier fare in both the patient and retail dining areas. In fact, McGrody even wrote a book about it called “What We Feed Our Patients” that describes the process of converting the dining operation at REX from its traditional format to one that emphasizes freshly prepared food made with fresh ingredients.

The health and freshness focus in the dining program has been successful enough to help UNC REX garner Gold Apple Hospital certification from workplace wellness organization Prevention Partners several years ago. It also rated a mention as one of “Nine Great Meals in Unexpected Places” put together a couple of years ago by Conde Nast Traveler.

The process has been driven by a focus on commercial-style self-developed concepts in the healthcare facility’s three retail outlets and by a chef-driven menu on the patient side that emphasizes fresh preparation in its room service-style format.

“Chef-driven” is not just a throwaway line for UNC REX. Not only does the dining operation employ seven classically trained chefs but since 2008 it has also offered its Black Hat Chefs training program to elevate the culinary skill at all levels of the operation. A formal four-level course that includes a practical and written final exam, it encompasses subjects ranging from food costing and menu planning to knife skills and roasting and sautéing techniques.

More recently, as the need for such basic training has lessened with the rise in the caliber of staff hires, the program has expanded to specialized areas like charcuterie, and McGrody and UNC REX Executive Chef Ryan Conklin have taken the program on the road to teach kitchen staff at other healthcare organizations. They are also establishing a Center of Innovation & Excellence where dining operations in other hospitals in the UNC system can participate in the Black Hat Chef program.

Sophisticated in-house-developed retail concepts are the norm at UNC REX under McGrody. The facility’s two traditional locations include the Courtyard Café with five concepts such as Cib/o-grille and the Showtime Chefs in Motion action station, while the three-station Korner Café has the Mezza Luna made-to-order salad concept and Caprese’s Deli.

Cib/o-grille was specifically developed five years ago when the hospital decided to remove the fryers from its grill station.

“We rebranded it [as a place] where you could get things like grilled salmon and grilled plantains that you’d never see in a hospital grill,” McGrody recalls. “People thought we were crazy to get rid of our fried food and said that we were going to lose sales, but we actually saw a 7 percent growth in revenue off our grill. We were the first hospital in North Carolina to get rid of fryers,” he says proudly.

“We do a lot of whole grains,” he adds. “We still sell sodas, but our meals are scratch made with fresh ingredients and we buy locally as much as we can.”

The newest addition to the retail mix is a free-standing concept called Kardia, located in UNC REX’s new heart and vascular hospital.

“When they were building the new hospital, we wanted to do something different,” McGrody observes. “We wanted to have a restaurant and get away from the cafeteria type of stuff.” To get the required throughput capacity, the eatery is what McGrody describes as “fast casual” but “the kicker is that attached to it is a 200-seat demo kitchen with state-of-the-art audio/visual that is part of the Kardia brand.”

The fully equipped demo kitchen offers a variety of classes in diet, cooking and health to both staff and visitors. Instructors include both UNC REX chefs and dietitians, often in tandem.

Overall, McGrody is responsible for foodservice at five facilities in the UNC REX footprint, including two long-term care centers with 220 beds total and a mental health facility. The hospitals have a total of 660 beds, and the kitchen is producing nearly 500 meals per meal period a day, he estimates.

Still to come, McGrody says he and his team are working on a street food concept to add to his brand portfolio that will leverage the popularity of food truck cuisine. He also wants to leverage his production capabilities as UNC REX adds more office facilities around the hospital complex by potentially offering a catering/delivery service to those locations.

“To drive your sales you often have to go to the people” rather than them coming to you, he observes. “We’ll brand it as our food. If we don’t do it, Panera Bread will do it.”