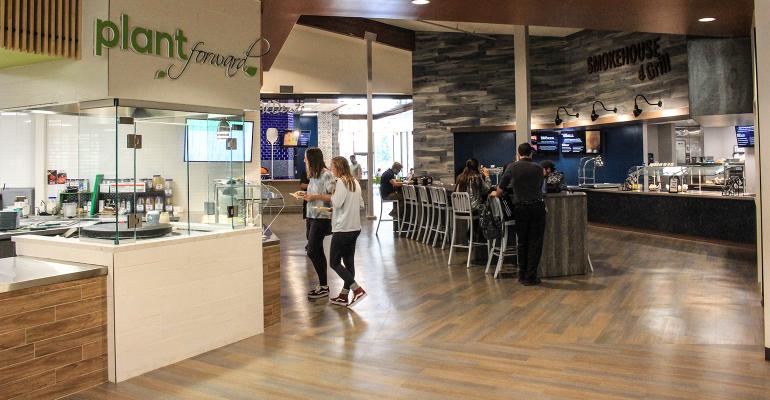 Tucked away between the Grand Canyon to the north and Arizona’s major cities of Phoenix and Tucson to the south is the main campus of Northern Arizona University (NAU) in Flagstaff, which boasts one of the most successful and creative campus dining programs in the country. Managed by Sodexo, campus dining at NAU not only serves a major population of some 22,000 students, including about 10,000 who live on campus, but does it in a way that prompts even the students who live off campus or aren’t otherwise required to purchase meal plans to do so.

And the meal plans they buy aren’t your typical cheapie commuter plans costing a couple of hundred bucks, as the least expensive meal plan of any kind at NAU costs $1,172 a semester for 50 meals (with five bonus meals) plus $600 in dining dollars.

“We don’t have any really small plans because it’s hard to build value in those plans,” explains Ben Hartley, Sodexo’s resident district manager at NAU.

Yet, up to 80 percent of students who continue to live on campus after their freshman year (only freshmen living on campus are required to purchase a plan), as well as up to 1,400 students living off campus, purchase full meal plans. The dining program had about 8,000 meal plan holders in the 2017 fall semester, while some 600 other students participate only in the dining dollars declining balance account program.

What drives the numbers?

“As we’ve been growing our population and trying to keep this campus as a premier residential campus [over the past decade], it certainly has been the vision for the vice presidents that oversee dining and resident life that [those two areas] go hand in hand to create a campus culture that fosters staying on campus,” says T.C. Eberly, executive director of campus services and activities at NAU, adding that “healthy eating and heathy living contribute to the overall student experience at this university.”

A history of innovation

Certainly, the geography of the NAU campus plays a part in keeping students on site, as it is somewhat isolated and self-contained in a fairly small city with relatively limited attractions, but so does what the meal plans buy as NAU Dining is one of the more creative operations in the country. NAU is piloting an expanded version of the company’s EAT concept.

Today, NAU is piloting an expanded version of Sodexo’s EAT Food Market retail platform in a newly opened campus apartment facility called SkyView that houses over 600 students, part of a torridly paced initiative to add campus housing in the face of booming demand, says Eberly, who estimates the school has been adding an average of nearly 400 beds a year for the last five years.

Skyview is fortuitously located, right in between what used to be a kind of no man’s land between NAU’s north and south campuses. It is also a prime spot for a creative retail/foodservice hybrid concept like EAT given both the Skyview’s residential population and the flow of traffic between the two campuses that pass by it each day.

Similar to the Southwestern/Southern regional natural grocery chain Sprouts, EAT has a retail component with a basic c-store product mix as well as some fresh produce and healthier items, while its foodservice component includes noodle bowl, vegan juice/smoothie/shake, salad and tea concepts.

The tea concept is a commercial brand called Village Tea Co. that serves only loose-leaf tea products by the cup in various blends, lattes, smoothies and iced tea concoctions. Unusually, it serves no coffee-based drinks.

NAU is serving as a kind of EAT pilot site for Sodexo not only to develop the retail/multi-foodservice station concept but one with an especially healthy profile, as can be discerned by the nature of the concept choices.

“Student here ask for healthy all the time,” offers Casey Lea Fisher, director of strategic planning and marketing for NAU Dining, noting that the culture and location of the university lends itself to attracting students particularly interested in health and sustainability issues.

The EAT Market operation is one of two major recent additions/upgrades to campus dining at NAU. The other is a totally renovated and transformed residential dining facility called the DüB Dining District where seven new food platforms (including a Simple Servings station) now offer students everything from pizza from a stone hearth oven and meats from an onsite smoker to international tapas and plant-based specialties from a dedicated vegetarian/vegan station.

“We call it a ‘dining district’ because we patterned it after some ideas we had gleaned from [food hall concepts like] the Anaheim Packing District, Eataly and Chelsea Market because it has separate little restaurants in it,” Fisher explains. The DüB reopened this fall with seven new food platforms in a food hall-style layout.

The DüB was part of a major renovation of NAU’s du Bois Center facility, which serves as a kind of student union for the school’s south campus. The totally remodeled building includes the DüB—one of two all-you-care-to-eat residential dining facilities on the campus—as well as a new retail dining area with Subway and Qdoba units plus one called Coffee & Bagels that serves Einstein Brothers branded bagels and sandwiches and Caribou branded coffees and blended drinks.

The renovation that produced the DüB involved expanding an existing residential dining area by absorbing what had been a retail dining area. The new venue is characterized not only by significantly more space but also how that space is designed.

For instance, all the external walls of the DüB are made of glass, which not only allows some viewing in from outside but more importantly allows the inside to take advantage of the surrounding topography too. NAU is located about 7,000 feet above sea level, making it one of the highest elevation college campuses in the country, and it is surrounded by the largest contiguous ponderosa pine forest in North America, making for spectacular views.

As for the food platforms, the concept mix includes Plant Forward, an all-vegan/vegetarian food station with build-your-own-salad options and daily specials from its EVO grill healthy cooking platform, located just past the entrance to the servery area.

“We were really very intentional about where Plant Forward was located because plant-based diets are becoming more and more common and people—not just vegans and vegetarians—are looking for plant-based foods,” explains Hartley. “We also wanted to be very conscious about having fresh, healthy, whole foods be the first thing that you see when you come in.”

The prominence of Plant Forward and other healthy dining platforms like the concepts in EAT help NAU meet its commitments as a signatory to the Partnership for a Healthier America’s Healthier Campus initiative.

Among other station concepts in the DüB are Smokehouse & Grill, which has its own in-station smoker unit, and Al Dente, a double-sided Italian station with to-order dishes utilizing fresh pasta from in its own pasta machine on one side, and pizza made fresh in a stone hearth oven on the other. Offerings include standard menu items and daily specials for those in a hurry and customizable options for those who can wait for a to-order dish.

A more exotic outlet in the DüB is the International Tapas station, which is based on the Spanish tapas small-plate approach but with a culinary net spread around the globe and selections that change daily. One advantage of this station is that it gives students the chance to try something unusual in small quantities.

The Simple Servings outlet in the DüB sits in a space that was specifically designed for the food-allergen-free concept originally conceived and developed at NAU almost a decade ago. Meanwhile, the original Simple Servings station still operates in NAU’s other residential dining center, the Hot Spot.

The concept specializes in serving a menu free of seven of the eight major food allergens and provides increasing value to the dining program in a world in which awareness of food allergies has become a major concern. Segregated from the other platforms, it has its own production equipment and utensils to ensure no cross-contamination.

After developing and deploying the Simple Servings concept nearly a decade ago, the NAU Dining team submitted it to Sodexo as part of the company’s system-wide innovation encouragement program, which eventually resulted in it being adapted as a proprietary branded concept available to other venues where the company operates. As such, it serves as a prominent example of how Sodexo leverages unit-level innovation to enhance its offerings across its operations.

Meanwhile, somewhat overshadowed at the moment because of the prominence of the newly opened DüB and EAT, Hot Spot still remains in many ways what it name says it is. Last renovated extensively about a decade ago, it has been NAU’s primary residential dining facility ever since, at least until the new DüB’s debut, because of a series of fairly creative dining stations. These include not only the usual pizza/pasta, grill and entrée stations but one called Wild Mushroom that serves vegan and vegetarian entrées and sides and a Superfoods Bar serving a variety of nutrient-packed foods.

NAU’s meal plan approach allows flexibility in making dining choices as plans include meal equivalencies at the more than 20 campus retail outlets, including a couple of prominent national brands like Chick-fil-A Express, Subway and Einstein Brothers Bagels and a few Sodexo concepts like Jazzman’s Café and the Mai Pham-developed Star Ginger, but the retail mix is heavily tilted toward campus-specific brands like G’s New York Style Deli, Cobrizo’s Mexican Grill, Turnip the Greens and the Where’s the Food truck, which serves an ever adapting menu at various locations around the campus.