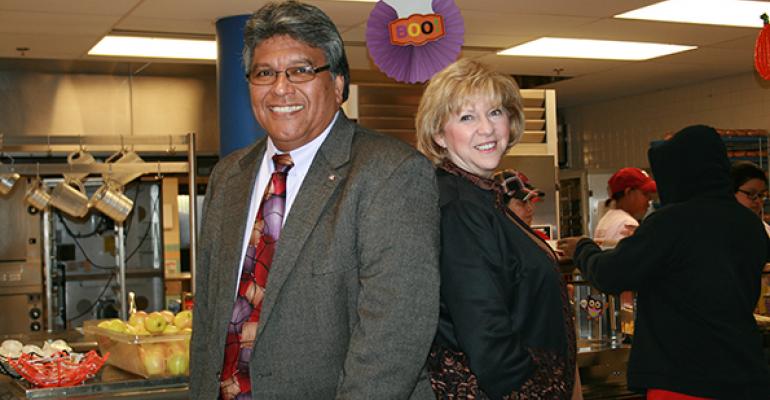 District Finds Two is Better Than One

When Oklahoma City Public Schools switched to self-op, the district brought in two of the city&rsquo;s most well respected professionals to guide its child nutrition program into a new era.

Both are recognized school nutrition leaders in the Oklahoma City metro area with outstanding reputations. They are each active members of the School Nutrition Association, both locally and nationally. (Taylor served as president of their local chapter at the same time Ponce served as president-elect.) They even started a metro area school nutrition directors group to idea share amongst colleagues.

Until recently, Ponce had been the child nutrition director at Mid-Del Public Schools (Midwest City, Okla.). Meanwhile, Taylor, a registered dietician, had been the director of school nutrition services at Shawnee (Okla.) Public Schools. Both were established—and remarkably successful—in their districts.

But when Oklahoma City Public Schools (OKCPS) decided not to renew with its contract foodservice provider and instead bring child nutrition in-house, an opportunity arose for Ponce and Taylor that neither could pass up.

In June, OKCPS—which has 46,000 students, 5,600 staff, is 89% free/reduced and works with an annual budge of $27.1 million—began its search. Days later, two very qualified individuals were hired. Kevin Ponce as director and Deborah Taylor as assistant director.

FM: After so much success in Shawnee, Deborah, what brought you to OKCPS?
DT: The district had hired a consultant to evaluate changing from a foodservice management company to a self-operated program. When the consultant, who is a close friend, asked if I would be willing to apply for this opening, I emphatically said no. I was finally reaping the benefits of all my hard work at Shawnee Schools. But she asked me to pray about it. So I did. And within 30 minutes, I began to feel an excitement about what could be accomplished here. Within a few hours, I really felt like I should apply for the position.

KP: It was quite a coincidence, but I encouraged her to apply. I knew that she’d be great for this district.

FM: Turns out you both would be great for this district. Was the interview process very involved?
KP: For the first interview, I met with the child nutrition (CN) expert Deborah mentioned earlier who was helping the district make the shift. It was wonderful to see a CN professional play a big role in the interview process. It showed that the district was truly headed in a new direction.

At that time, I learned about the district’s goals and explained how I might help further their vision. When they brought me back in for the second interview, I met with the superintendent and the HR manager and they told me that they were planning to hire two people instead of just one. I saw a folder on the desk with my name on it and a folder on the desk with Deborah’s name on it. I knew then that something great was about to happen.

FM: Was that your first interview with them, Deborah?
DT: It was! Kevin and I had back-to-back interviews that day—his second, my first—so we had a chance to say hello in the moments between. He’s from Hawaii, and he hugs a lot, so he gave me a great big hug and wished me luck.

FM: So well that they called you 30 minutes afterward to offer you the job!
KP: I was shocked. And excited.

FM: Each of you is qualified for this position. Why is it important to have both of you on board?
KP: OKCPS is the largest school district in Oklahoma. The vision was to lead a staff and program in what’s best for students. Deborah and I each have different skills, but we both have the experience in that vision.

DT: We complement one another in important ways. There are no egos between us. We are focused on the students. And we work really well together as a team.

FM: Kevin, why do you think it’s important to have a dietician on staff?
KP: Deborah gives the department and the district instant credibility. She is an expert in her field and she can help with changes in children’s health, in food and with local and national regulations. The district made a very smart move by bringing her on board.

FM: How did the staff react to all the changes? And to you two?
DT: Employees here accepted us quickly. Oklahoma is a small state and we are both very active in the School Nutrition Association of OK. Plus, we both have good reputations. Once we were hired, the uncertainty for them was over. One of our managers even posted on her personal Facebook page that she finally knew her new bosses, and that she couldn’t be happier.

FM: Kevin, you started your career in this district as an area supervisor. Has it changed much?
KP: OKCPS has had both outside management firms and in-house staff. The operational approach may have changed a few times, but there’s always been a focus on serving students the best nutritional meals.

DT: I think that the perception was that the food was horrible, but truthfully it wasn’t. It needed some revisions and updates, but we brought in a new district chef and the staff was ready for change so it’s actually a pretty smooth transition.

We are also in various stages of adding three nutrition specialists, a test kitchen, food trucks that will menu healthy school meals, grant writing for more equipment and programs and wellness programs for our employees, too.

FM: In such a short time, you’ve been very busy! What have been some of the biggest challenges you’ve encountered?
KP: My biggest challenge is undoing the cultural and behaviors that were established over the past 10 years.

DT: I have two main challenges. First, we are both used to having a foodservice warehouse. Here, every food item comes from a distributor. Changing menu items, adding variety or stopping an unpopular product is slow. And second, the bureaucracy moves very slowly in a district this size.

FM: How so?
DT: For example, HR is changing to an online system. This has slowed hiring way down. We started school 40 people short. Because everyone applying must have a private email address, we went several weeks with no new applicants. When kitchens work shorthanded, the groups become very disheartened. We are finally seeing some movement within the system, though.

Also, losing the management company meant losing the management team. Kevin rebounded immediately by putting together an organizational chart to identify the needs we have. He wrote job descriptions and began the process of posting these positions. Once the district received these, it still took weeks before the positions were approved and posted. Meanwhile, he and I were trying to keep everything afloat.

KP: It’s been nonstop.  But, we have the support of the administration, school board, community and staff. And we’ve had great, positive media reports, both local and national.

FM: You both spend a lot of time in the cafés with students talking with them about what they like and don’t like, right?
KP: We do. We have to have to eat lunch so why not eat with our customers? We stand in line with them, we go through the line with them and we usually are able to sit at table and eat with them.

DT: Students love to tell you what they think. You just have to ask. And listen.

FM: This must have a huge impact not only on the kids but on the staff, too.
DT: Managers will call us all the time to tell us how proud their staff was to be able to serve us that day. The people in this district work so hard and they do such a great job. It’s fantastic to be able to see it firsthand.

FM: So where do we go for here? What’s next for OKCPS?
DT: More taste testing, recipe improvement and menus that make sense.