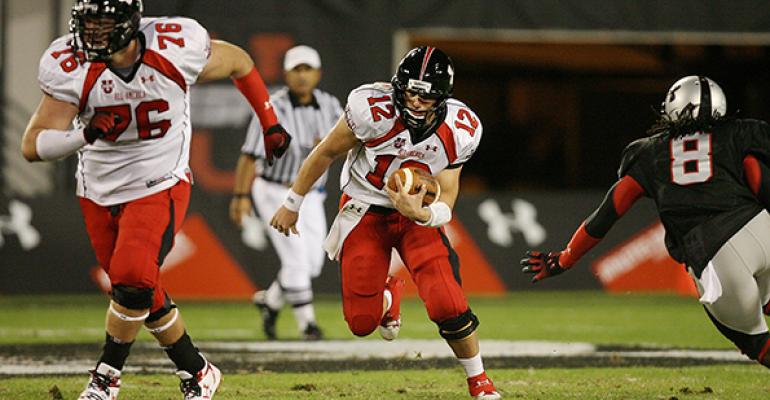 Forget tailgating. If Limestone County schools’ football players or fans want to fuel up, they can head straight to the cafeteria.

In late August, the northern Alabama school district launched a pilot program offering hot meals to students and adults before Friday night home games at six of the district’s high schools. After offering free and reduced price breakfasts and lunches to students over the summer, Child Nutrition Program Director Teresa Rogers and District Superintendent Thomas Sisk decided to extend the program into nights during football season. With 50 percent of Limestone students qualifying for free or reduced price meals, Rogers and Sisk knew there was a need for more feeding opportunities. “We have backpack programs that give students meals to take home for the weekends. So this gives them another hot meal going into the weekend,” Rogers says.

The program was also an opportunity to bring in new customers. “We chose home football games because we knew kids would be on campus, including the athletes, cheerleaders, band members and students that help with setup,” Rogers says. On Friday nights, hungry students who don’t normally buy school meals could be more likely to do so—and come back for breakfast or lunch during the week. Parents, as well as students from other districts, are also welcome.

Fortunately, prepping and serving doesn’t require too much extra work. “A lot of the food is prepped during the regular workday,” Rogers says. So she’s able to staff the dinners without having to pay overtime hours—and manages to turn a profit. It costs $1.15 to $1.75 to feed each student, but the USDA reimburses the district $3.04 per meal. The district isn’t reimbursed for adult meals, which cost $2 to prepare, so Rogers sells those for $4.50. “The money goes back into the child nutrition program to purchase equipment and other items as needed. So it’s a win-win for us,” she says.

So far the district has served more than 1,500 meals, with participation at most schools growing each week. And while it seems like feeding students before the game might cut into concession stand profits, that hasn’t been the case. Mealtime in the cafeteria ends at 6, but concession sales don’t start until game time, at 7. Plus, the hamburgers, hot dogs and pizza that customers can buy at the concession stand aren’t available in the cafeteria. In fact, concession sales have been at a record high this football season, Rogers adds.

As Limestone’s football season winds down, Rogers and Sisk are still deciding whether it makes financial sense to offer dinner before winter basketball games and beyond. “We’ll probably continue it through our summer feeding and have the programs overlap,” Rogers says.

Should the program continue into next fall, Rogers expects that participation would grow even more. The decision to launch this year’s program was last minute, and two of the district’s schools had already allotted booster money for feeding their football players before games. “Next year, those schools can participate in the meal program and save their booster club money for other things,” Rogers says.

There’s also the possibility that next year’s meals could move outside of the cafeteria entirely. During the summer, Limestone already uses a renovated school bus as a mobile feeding site for districtwide breakfasts and lunches. “We may incorporate the bus into fall feedings and use it as an opportunity to promote them more,” Rogers says. Sounds like a touchdown-worthy move.