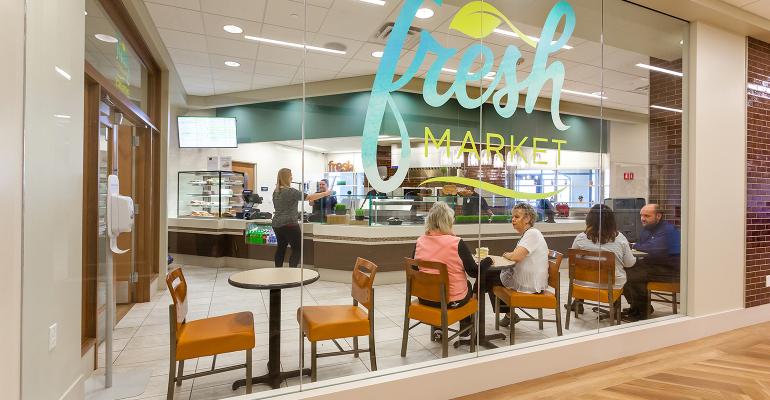 Photos: Mike Smith/Sanford Health
Fresh Market is one of three self-developed restaurant brands lined up side by side in Sanford’s new main hospital facility.
Operations>Management

A new main hospital and the conversion of the old one to a cancer care center gave the dining team at Sanford Health a chance to design and open retail outlets with flair and construct an efficient centralized kitchen.

Rare is the hospital dining department that gets enough funds for a complete makeover—or even an almost-complete makeover—but that is what the in-house dining operation at Sanford Health in Fargo, N.D., got as part of the healthcare system’s adding a major new facility on the city’s outskirts. Sanford’s dining department used the rare opportunity to not only modify—but totally transform—its operations.

In the new main hospital facility, which opened July 25th when it received most of the patients transferred from the original main hospital downtown, the department implemented a suite of three premier restaurant concepts it developed in-house, plus a hybrid c-store also of its own design.

Meanwhile, the production kitchen in Sanford’s existing main hospital facility in downtown Fargo received an overhaul and expansion that will allow it to serve the entire network efficiently and cost-effectively with key menu items and components. Also added at that hospital were two new restaurant concepts, including a sit-down venue designed to serve the needs of a particular demographic that the hospital will now be serving. The new dining concepts at Sanford facilities range from counter service and grab and go to a sit-down venue with table service.

The million-square-foot new main hospital currently is licensed for 284 beds but can expand to as many as 480, while the original downtown hospital is being transformed into a free-standing cancer center with multiple outpatient services and 75 inpatient beds.

“I feel very lucky and very blessed to be the champion for all this because I think it will really set us up to be in a really good situation as our volume starts to increase,” says Lisa Gibson, director of culinary services, who had been with the organization for the past 13 years. “It has been fun, though I wasn’t anticipating running two projects at the same time!”

The new hospital includes the foodservice expansion project’s most eye-catching additions: three independent fast-casual micro-restaurants set side by side with a glass wall separation on the facility’s second floor, each a distinct brand developed by the in-house team.

“I didn’t want a ‘buffeteria’ with all the different stations,” Gibson explains. “That wasn’t the vision I had for our organization going forward. Rather, [I prefer] these micro-restaurants that are flexible and that we can open and close or just change the menu as much as we want to.”

Fresh Market, characterized by a large gas-fired stone oven at its center, which menus seasonal composed salads, ready-made sandwiches, selections such as lasagna rollups and other pasta-based dishes from a hot deck, plus flatbreads and Neapolitan crust pizza from its stone oven that include not just standards like pepperoni but also more exotic ones like wild mushroom and sausage/apple/Brie; and

Farmhouse Kitchen, which specializes in “anything you would find at your grandma’s house when you went to the farm,” per Gibson, and is centered around a huge cooking suite with a grill and multiple burners. It serves breakfast favorites like sausage, bacon, omelets, crepes, pancakes and waffles all day—“Breakfast is huge in this area,” Gibson comments—as well as traditional favorites like meatballs, cashew chicken, sloppy Joes and Monte Cristo and Reuben sandwiches later in the day.

Farmhouse Kitchen is the only one of the three open for breakfast and it stays open later (until 8 p.m. while the other two shutter successively at 6 p.m. and 7 p.m.). In fact, it may soon extend its hours to 11 p.m. and eventually to around the clock, Gibson says.

“It was always our plan to operate that particular one that serves breakfast all day to 24 hours if we can recruit people to work it,” she explains.

The new hospital also has a hybrid c-store called the Pantry on its concourse level, which is only open to employees. It incorporates an espresso bar and a hot deck serving breakfast and lunch sandwiches, hot dogs and similar to-go items, plus a retail component where staples like milk, bread, some fresh meats, dry/frozen goods and sundries are sold. Each of the new retail dining outlets in the Sanford hospital facilities has its own look and menu to give customers a variety of cuisine options.

“It’s meant to be convenient for the employees as they are leaving to go home so they don’t have to stop at the store,” Gibson explains.

While the Pantry exclusively serves in-house customers, the three micro-restaurants cater primarily to an external customer base of hospital visitors. Gibson estimates the ratio as 2:1 external but notes that the internal business is boosted by a mobile ordering option that allows customers to select their own pickup time.

The micro-restaurants opened in July with the hospital, so Gibson has had a few months to gauge customer preferences.

“When we set out to do the menus we really were hoping to do some more elaborate recipes, but we found we needed a happy medium, so while we have some nice things if you want to try something different, we also need to have things people recognize,” Gibson laughs, citing the rural Midwestern demographic the hospital primarily serves.

The addition of the new micro-restaurants required a substantial investment in labor as Gibson’s department added some 75 FTEs (over a hundred individuals), many with skills different from what the hospital had previously required.

“We started [the recruitment process] maybe a year and a half ago [to identify] the kind of person we would need—line cooks, [not] people with a lot of quantity cooking experience,” she explains.

Gibson worked with culinary schools as far away as Minneapolis “just to get the word out that we were really changing what we were doing.” The effort went as far as local TV spots in which some of the existing staff chefs showcased the kinds of things Sanford Health’s dining department would be doing, “and that drew a lot of interest from a lot of folks,” Gibson reports. There was a real sense of urgency “because we were really changing how we do things, so we really had to be mindful of what kind of employee we were going after.”

It wasn’t just line cooking experience that she was looking for but also people skills. Among the recruits were a couple of culinary arts program graduates from nearby Minnesota State-Moorhead and an executive chef from one of Fargo’s largest convention centers—“and, of course, when the executive chef goes, a lot of other people go with him, so was able to recruit four or five people from his team at the hotel, which was hugely beneficial for us,” Gibson adds happily.

The first phase, completed this past February, saw the construction and opening of a quantity kitchen and centralized catering area along with the debut of the Fresh Market brand with a unit similar to the one that would open at the new facility later in the year, except without the stone oven. However, it still does serve pizzas along with flatbreads, paninis, hot and cold sandwiches and composed salads.

The quantity kitchen is designed to streamline dining service in both the retail and patient dining areas by producing components that can be incorporated into on-demand dishes, which are now the norm not just in the new micro-restaurants but also in the room service-based patient dining service that operates across all three of the system’s hospitals in Fargo.

The highlight of phase two was the opening of a sit-down/table-service restaurant called Prairie Mill Café, designed with a very specific purpose in mind.

“One of the reasons I wanted to do a seated restaurant at that location was because that’s where the cancer hospital is, and generally, when cancer patients come in, with the appointments and the lab work, it’s a whole-day affair,” Gibson explains. “Most often, [the cancer patients] have to bring somebody with them and that person doesn’t have a whole lot to do, so we thought a seated restaurant would be a great fit there because they can go in the restaurant, sit down, relax, have a nice meal, be served and really enjoy themselves.”

Staff is also welcome at Prairie Mill, of course, but most prefer to preorder from the adjacent Fresh Market outlet with the same mobile app used in the other hospital.

An unusual aspect of Fresh Market is the double-sided kitchen adjacent to its dining area. One side opens on a chef window through which Prairie View diners can see the chefs at work preparing their meals while the other side is a production kitchen for the room service patient dining operation.

The design allows cross-utilization of labor and other resources depending on demand between the two sides of the operation.

Phase three of the dining infrastructure renovation at the downtown Sanford facility, scheduled for completion at the end of 2017, involved additions and upgrades to the central production kitchen, including expanded temp-controlled storage; a centralized ingredient control area where ingredients for all locations can be weighed and measured to ensure uniformity and compliance with nutritional standards; centralized vegetable prep, bakery and grab-and-go production areas; and the addition of a major cook-chill center that can turn out soups, sauces, bases and housemade dressings for all system locations, including not only the three hospitals but also an administrative center and a large outpatient clinic building.

The café operation at the latter facility is part of a single retail footprint jointly administered by the Sanford dining department and the hospital’s gift shop that combines the retail component—gifts, apparel, jewelry, etc.—with a food/espresso bar that serves hot sandwiches and entrees, oatmeal, bakery items, two daily soups and grab-and-go sandwiches, salads and parfaits.

Sanford Health’s third Fargo area hospital, the 90-bed South University location, still operates a traditional “buffeteria” as its primary dining outlet that is slated for a renovation in the next few years as it converts from being a traditional in-patient hospital to a specialized orthopedic center serving both in- and out-patients.

One On One With: A long-term care dining director on serving during hardships of coronavirus
May 04, 2020