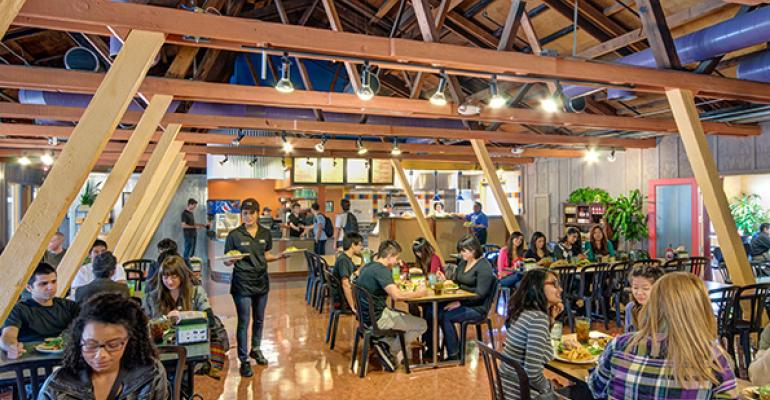 <p>Barn dining room: UC-Riverside employs 900 student employees in dining services. As food costs increased, dining services had to cut the employee meal perk in half. Dining services estimates this will save $100,000.</p>
Operations>Management

University finds a creative way to absorb cost of goods increases while staying attractive as a student employer.

The University of California at Riverside has cut dining student employees’ meal plan perk program in half in order to offset rising food costs. Dining services now offers $5 per day instead of the $10 perk, which has been an employee benefit for years.

“We have seen enormous cost of goods increases in recent years, with grains and produce, but especially with proteins,” says UC-Riverside's Executive Director of Dining Services Cheryl Garner. “Proteins such as chicken and beef have gone up well over 10 percent, and items like sushi-grade tuna have actually doubled in price.”

These steep increases proved to be more challenging than other factors such as wage increases, Garner says, because “we want to pay a living wage, we believe in it, but we can see that increase coming and can plan for it. In the last few years, however, the food cost increase has been much greater than expected.”

Initially soaring prices of beef, chicken and other protein staples led UC-Riverside to freeze some management positions. It also led to a 2 percent increase in meal prices this year, which for the consumer is still relatively low. But it’s the highest increase Garner has seen in her time at UC-Riverside, where the average price increase has been around .5 percent annually and only on select items.

Even with these cost-saving measures, they still needed more ways to offset the unexpected cost of goods increases. “That’s when we started to get really creative with what else we can do,” Garner says. “I started looking at the cost of that meal perk and with the average shift of three hours, it equated to a $3.33 per hour perk in addition to the employee’s wage.”

Garner and her team then looked within the industry at other campuses to see what were typical meal perks and found that a lot of places didn’t offer anything, but when they did, it was closer to a 50 percent discount.

“Our $10 program turned out to be a fairly high-level perk,” Garner says. “Five dollars still gives the opportunity to get pretty close to a meal, and we thought that remained a strong perk.” The beverage perk remains the same: Employees get unlimited shift beverages—anything but expensive espresso drinks or packaged drinks—that they can enjoy on their breaks.

When the $10 incentive was first offered, UC-Riverside only employed around 300 students. But over the last 10 years, the campus has grown incredibly and UC-Riverside dining has expanded operations, built new restaurants and now hires 900 student employees.

Of those nearly one thousand student employees, Garner says only one has decided not to return to their position because of the reduced meal plan perk. And while most universities have had significant trouble attracting student workers, sometimes even cutting dining hours or closing food stations as a result, UC-Riverside is an exception to that trend.

“I’m lucky in that I don’t really have to offer an enticement to find student employees,” Garner says. “Every year I turn away many, many students.” She says UC-Riverside’s student population is predominantly hardworking, first-generation Americans whose families have worked very hard to get them into college. The students are in general highly appreciative to have the flexibility to earn a living while being on campus to attend classes.

“Plus, we offer levels of opportunities to grow from student employees to student supervisors to student managers. I think we’re also an attractive employer because we work around students’ schedules,” Garner says.

Cutting the meal perk in half means UC-Riverside dining is estimated to save about $100,000, which, Garner says, “equals a heck of a lot of food price increases.” It also allows the school to still employ 900 students in its dining locations as well as keep meal prices competitive with restaurants in a three-mile radius of campus. “It’s important for us to not only give a living wage to student employees,” Garner says, “but to keep retail and meal plan prices reasonable for student diners as well.”