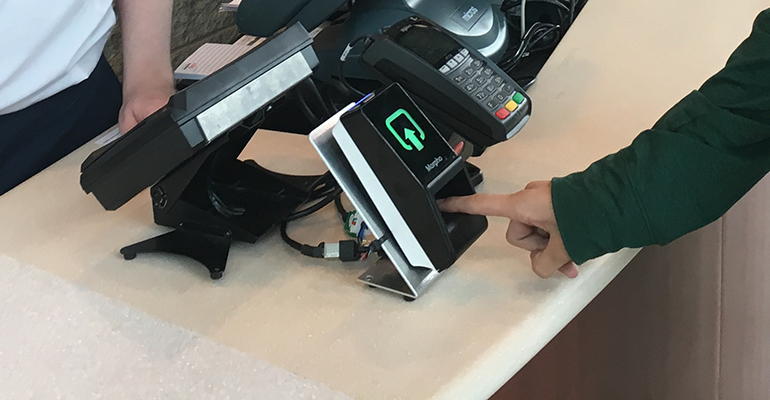 System debuted last spring at the two campus AYCTE dining halls, with over half of meal plan holders signing up.

Marshall University in West Virginia is one of the latest schools to venture into the biometric ID world, piloting a system at its two all-you-care-to-eat residential dining halls last spring. The experiment was successful enough that the program is back this fall, and in fact may be expanded to additional locations, though not immediately into retail dining areas.

At least half of the some 2,500 students on meal plans signed up to use the biometric program last spring, reports Bob Dorado, campus card manager, and “beginning this summer with our summer orientation, we’re enrolling everybody.”

Plans call for the biometric readers to expand to areas beyond the dining halls. “This fall we’re going to start a test with door access,” Dorado says, “initially on a high-volume door near our office so we can monitor it and address any issues.” 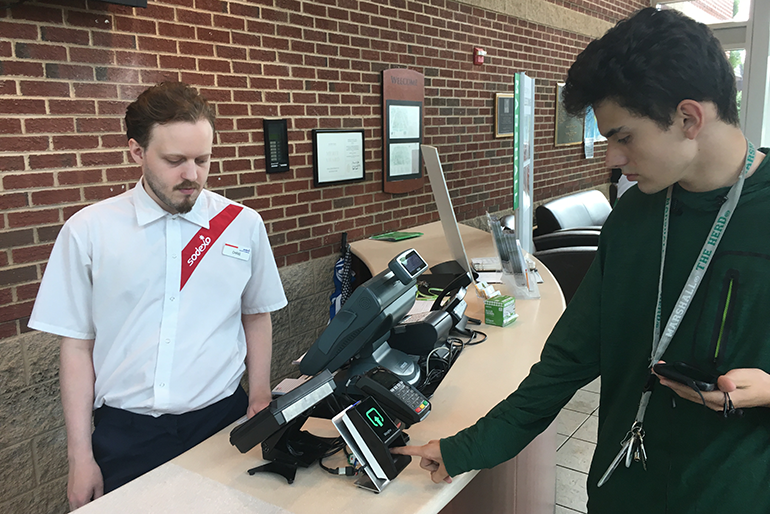 The biometric system scans index fingers — but not fingerprints — to identify individuals.

After that, he expects rapid expansion, especially into sensitive areas such as the data center and lab spaces, “areas to which we don’t want cards passed around.” Expansion into retail dining areas, however, will wait until a refresh of their POS system next year. “We’re certainly going to look at biometric integration when we shop for a replacement vendor on that,” he suggests.

The biometric system at Marshall uses the scan of an index finger to identify an individual, but Dorado stresses that these are not to be confused with fingerprints, though there has been scant controversy about it as students are already used to biometric finger scans to activate personal electronic devices such as iPhones and iPads.

“It’s nothing to this generation,” he says.

Enrollment in the program takes less than a minute and consists mainly of getting one’s two index fingers scanned and input into the system. Then, when it is used to enter a dining hall, it automatically credits the student’s meal plan with a swipe the same as if the student was swiping an ID card in the traditional manner.

Students who enroll for biometric access also retain their conventional ID cards but the biometric system gives them an alternative, and it can be a real benefit in some cases, such as if a student lost their ID card at a time when the card office was closed, or if they simply don’t have their card on them when they want to get something to eat.

“We’re also looking at the security factor,” Dorado adds. “You can’t give your fingerprint away like you can an ID card to your boyfriend or girlfriend,” so that helps control dining hall costs in that it prevents multiple individuals from using one card.

He says the university decided to test the system because “some of our students were telling us they were using this kind of a system in high school, so how come in a college we still have to carry an ID [card] around? Well, we like to be on top of things tech-wise here, so we looked into it and found it to be affordable and reliable.”

In fact, he adds, the system has not yet registered a single misidentification.

Last spring, a concerted effort was made to get participation and publicize the option.

“We went to the halls and set up enrollment stations in the cafeterias near the cashier stands and also in our office,” Dorado says.

“It was very successful and we’re very happy with the technology and the reliability.”