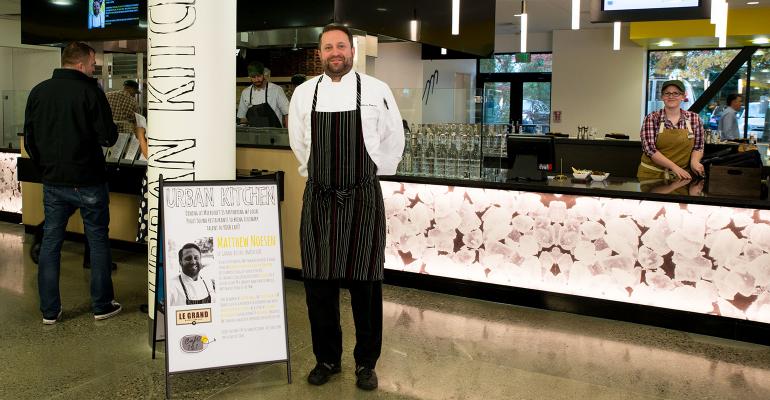 Microsoft
Chef Matthew Noesen gets to strut his stuff before Microsoft employees as part of the company’s Local Chef Series highlighting promising young culinarians from the Seattle area.
Operations>Management

Both young, aspiring chefs as well as well-established culinary figures from the Northwest have a major showcase place at the sprawling headquarters campus of the high-tech giant.

This is part of Food Management's new Community program, which highlights the ways onsite operators are lending a helping hand in their communities.

Young, aspiring—as well as established—chefs in the Seattle area have a major showcase place at the sprawling headquarters campus of high-tech giant Microsoft, located in nearby Redmond. The campus serves more than 44,000 employees daily through a network of more than three dozen cafes, a portion of which are reserved for local restaurateurs through a program called Hometown.

In addition, a rotation of over a dozen local food truck operators are given access to the Microsoft campus regularly to provide even more dining variety for employees while promoting their brands. Microsoft has been partnering with area restaurateurs for well over a decade now, bringing locally based concepts to designated stations in each of its cafés either as everyday options or in rotation at a specific station. Some have been in place all along, while others have come and gone, but the core idea remains the same: to provide more variety in-house while giving the restauranteurs visibility and access to the huge onsite customer population. And for those concepts that do primarily a dinner business, the lunch-centric nature of the Microsoft dining environment provides a revenue stream from a second daypart.

If that long-term program weren’t enough local engagement, an initiative called the Local Chef Series now brings up-and-coming chefs from the Seattle area to the campus to spotlight their cuisine in in a specially designed space called Urban Kitchen that was opened about eight months ago in the Café 121 location on campus. There, the local chefs gain visibility for both themselves and their brands before a sophisticated, influential population.

“It’s an open kitchen where people can sit around and watch the chefs work,” is the way Mark Freeman, Microsoft’s senior manager for global dining services, explains Urban Kitchen. “We put these local up-and-coming chefs in there on a month to six-week rotation during which they come in and train our Compass employees [dining at Microsoft is operated by the Eurest unit of Compass Group] on their menu, their style and how they do things, and then they have their menu [featured] at Urban Kitchen” for the duration of their rotation period.

“It opens doors to these newer chefs who are coming up,” Freeman adds, while Microsoft employees get either a three-course meal or à la carte selections made by these local restaurant chefs at a modest price.

“It’s neat in that we get to promote the local chef while the local chef gets to glad hand with the customers, which helps to build their brand so that when [the Microsoft employees] go to their restaurant there’s already some connection,” Freeman says.

It’s not just the young unknowns who get to show off their creations and talents at Microsoft, as the company has also partnered with a pair of established celebrity chefs from the Northwest on concepts designed specifically for its campus. John Howie (SeaStar, John Howie Steak) operates a restaurant called in.gredients that is situated in Microsoft’s Café 34 dining location and serves as a higher end sit-down venue alternative to the counter service at the other stations in the café.

The celebrity chef venues are customized concepts, not duplications of the chefs’ existing restaurants and, in fact, help them expand beyond their existing concepts. For example, the menu at Howie’s in.gredients has more variety than at his seafood-focused SeaStar or steak-focused John Howie’s Steak, “so in a sense it’s like a test kitchen where he can try different things,” Freeman offers. And Microsoft employees enjoy the results at a very modest cost: a three-course meal at in.gredients runs $15.

The in.gredients operation also invites other celebrity chefs to do a menu rotation. Jason Wilson (CRUSH, Miller’s Guild), another Beard Award winner, recently did a turn at in.gredients. Hines was first brought to Freeman’s notice when she guested at the restaurant.

Her operation at Boardwalk Pub is also a departure from her signature operation at Tilth, though Boardwalk’s pub fare-based menu is also mostly organic. The pub also dispenses locally produced wines and beer, representing yet another tie between the Microsoft campus and the outside community.

Bringing in the outside chefs also benefits the in-house staff, Freeman adds.

“Our chefs who work with John Howie, Maria Hines and the local chefs gain not only skills but diverse skills as they get trained both by chefs who measure every grain of salt as well as chefs who just wing it. So they’re getting this [experience] of different styles of cooking.”