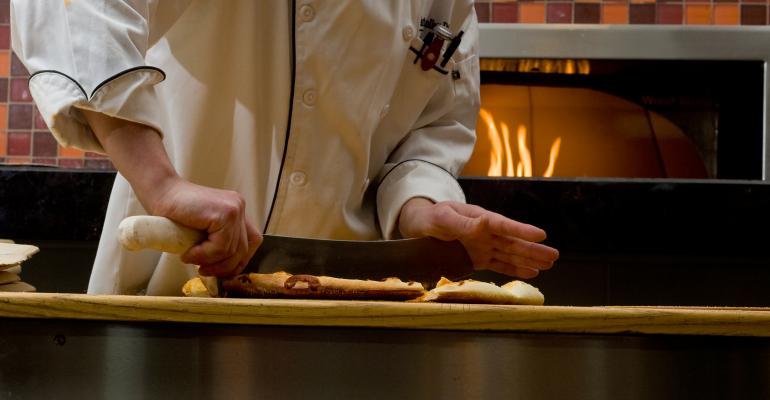 Bates College
The Bates dining commons features a brick-oven pizza station as one of its options.
Operations>Management

Bates College in Maine has one of the longest running farm-to-college programs, was the first college to join the Green Restaurant Association and is one of a select few to earn a three-star GRA rating.

Bates has one of the longest running farm-to-college programs in the country, and currently sees about 22 percent of its food budget spent on locally sourced product (defined as coming from inside the state of Maine), including all its ground beef, which is also all grass-fed. Also, over 80 percent of unconsumed food is diverted from the waste stream, being either composted, recycled, sent to a local pig farmer or to a nearby food bank. Plus, all paper has now been removed from the dining room.

“We’ve been doing this for 25 years, so it’s not like it’s anything new,” says Christine Schwartz, assistant vice president for dining, conferences & campus events at Bates. The school was the first higher education institution to join the Green Restaurant Association (GRA) back in 2002, and is one of a select few to earn a three-star GRA rating for its sustainability accomplishments.

A universal access dining plan lets the some 1,900 Bates students patronize the dining commons and its array of fresh food platforms at any time. The campus retail dining outlet, the Bobcat Den, offers after-hours beer and wine to age-eligible customers along with a sandwich/pizza/grill menu.

Campus dining at Bates is part of a larger department called dining, conferences & campus events that also oversees catering, vending and all major campus events. It operates the campus event scheduling system and non-student residences like a guest house and apartments used for special guests.

“The advantage to this—and this department in its present configuration is only about four years old—is that it allows the institution to streamline things because, let’s be honest, what ever happens on a college campus without dining being involved in one way or another,” comments Schwartz. “So it really allowed the institution to streamline hospitality services under one central umbrella. Basically, you come here and we take care of everything.”

The residential dining hall is based on a platform concept that includes the Bobcat Bar (comfort food), a bake shop that is open into the servery so students can interact with the bakers, a grill, a standalone vegan bar, a brick-oven pizza station, a deli/soup station and a pasta concept in which the pasta is dipped at the station to make sure it is always fresh and hot.

The Bobcat Den retail outlet has a fast-food menu (pizza, grill items, etc.) along with healthier options like sushi, hummus, a salad bar and multiple sandwiches with local meats, cheeses and breads.

Local procurement is hampered somewhat by Maine’s truncated growing season and by the fact that the school’s volume requirements can sometimes overwhelm the capacities of local vendors.

On the other hand, the state is very good at producing some staple products such as potatoes—“all of our potatoes are sourced locally and you know how many potatoes you go through” at a college, Schwartz observes—as well as root vegetables, beans, honey and even lettuce and kale.

“We have an agreement with a local grower who cold stores our apples, so we’ll get local apples into March and even April if we’re lucky,” Schwartz adds.

She attributes Bates Dining’s perennial high scores in student-input-based rating services like niche.com and Princeton Review to food quality and the department’s relationship with its customers.

“You’ve got two things: you’ve got people and you’ve got food,” she quips. “We communicate a ton with students. Because we’re self-operated, it gives us the flexibility to be nimble.”

She cites as an example a recipe sent by a student’s mother last year—something that happens frequently, she adds—for a squash dish that was particularly appealing, and in season at the time.

“We tested it and just a week later we menued it,” she says.

The department is also working with students studying abroad who “are acting as foreign correspondents for us,” Schwartz notes, sending food-related items back that are published on the department website.